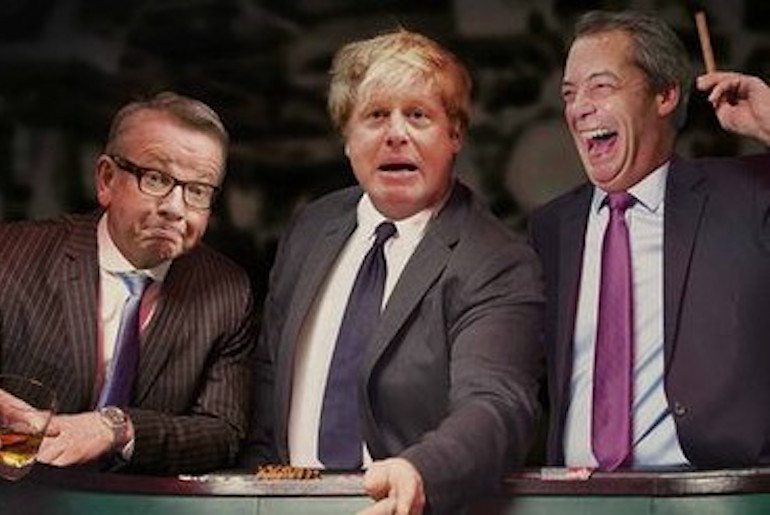 The Leave campaign is facing a possible investigation by the Crown Prosecution Service (CPS). The CPS confirmed on 7 November that it is considering a complaint that Vote Leave and Leave.EU misled voters and contravened electoral law.

Held in June 2016, the EU referendum campaign was criticised for a lack of clear information from both sides. Empty slogans like “We want our country back!” or “best of both worlds” were repeated in lieu of actual content. Many people had no idea what Brexit would really mean.

To compound that, after its narrow 52-48% victory, Leave soon abandoned its major pledges. Its campaigners had toured the country in a bus promising £350m a week for the NHS if Britain left. Yet within an hour of the result declaration, Nigel Farage admitted this was false. Theresa May’s government also backed away from the claim.

At the same time, Leave promised to limit immigration by taking control of Britain’s borders. Yet the night after the Brexit vote, prominent Leave campaigner Daniel Hannan gave an interview in which he stated that free movement of people would have to continue.

A group of experts in electoral law, led by Professor Bob Watt of the University of Buckingham, have filed an official complaint, stating that the Leave campaigns made:

assertions of fact that were knowingly misleading

The complaint centres on “undue influence”, which electoral law considers a corrupt practice. It includes the use of a “fraudulent device or contrivance” to “impede or prevent or intend to impede or prevent the free exercise of the franchise”.

The Guardian reports that:

If a case was brought successfully, it would not have any bearing on the referendum result or prevent the UK leaving the EU, but could result in criminal punishment of anyone held responsible by the courts for making false statements.

The Director of Public Prosecutions (DPP) is now considering the complaint.

Since inheriting the situation, Prime Minister Theresa May has been unable to clarify what form Brexit will take. On 3 November, she was blocked by the High Court from enacting Article 50 without the agreement of parliament. If this latest legal complaint is successful, and the Leave campaigns are shown to have broken the law, it will damage her position beyond repair. Her continued insistence on a ‘hard Brexit’ will be untenable.