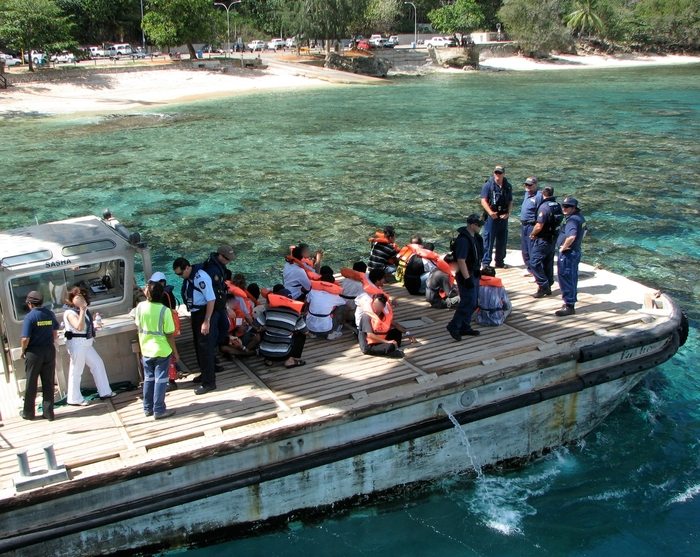 Second and third-generation Australians have just revealed how uneasy they feel about government Facebook ads encouraging them to tell their relatives not to come to Australia illegally.

Taxpayer-funded Australia Border Force ads are targeted at users based on their ethnic background. Australian-born Johnny Lieu, who listed Vietnamese as a language he speaks on Facebook, saw an ad in Vietnamese: “Never, no way — Australia will not loosen its tough border rules”.

This is the message the government expects him to pass on to his relatives. Lieu, whose parents migrated from Vietnam decades ago, said:

I’m not really sure what the point is of these advertisements except to make me feel uneasy.

I’m surprised that the Australian Government would see me in their sights.

In short, Australian citizens now feel wrongly targeted by a harsh immigration policy. And that’s just the tip of the iceberg.

The country has already come under fire from Amnesty International for violating international law through its hard-line approach towards refugees and asylum seekers.

And the situation for asylum seekers is about to get a lot worse. A ban – which parliament will introduce this week – will bar asylum seekers who try to reach the country by boat from ever being able to enter.

This proposed ban is a response to Australia’s problem of people smuggling. But the government has faced heavy criticism for its response to the situation. Border Force officials paid smugglers large sums of money to turn boats around, committing transnational crimes in the process.

Refugee Action Coalition argues that successive Australian governments have used people smuggling as a way to criminalise asylum seekers themselves. Of course, it is not illegal to claim asylum. In fact, it’s an international right. And there is no evidence that international criminal networks are organising asylum boats to Australia.

The government has used those assisting asylum seekers as part of its anti-refugee rhetoric. Former Prime Minister Kevin Rudd has condemned people smugglers as “the absolute scum of the earth”, saying they should “rot in hell”. Former PM Tony Abbott, meanwhile, called people smuggling an “evil trade”.

The penalties for people smuggling include facing up to 20 years in prison. It’s a crime on the same level as terrorism, rape and murder. This goes to show what the government thinks about asylum seekers, and those who aid them.

Australia’s harsh asylum policy reflects a deep undercurrent of xenophobia. 28.2% of Australia’s population was born overseas. Yet racism against migrants has been on the rise. One Mapping Social Cohesion survey found that 19% of Australians were discriminated against because of their skin colour, ethnic origin, or religious beliefs.

And as The Canary previously reported, right-wing ultra-nationalist groups have marched in Eltham, Victoria in protest against the settlement of refugees from Syria. The One Nation Party’s Pauline Hanson, for example, has promoted anti-Muslim rhetoric – similar to Donald Trump’s in the US.

Pro-refugee activists have been fighting back and exposing xenophobia. But in an environment of harsh and illegal immigration policies, anti-refugee rhetoric from politicians, and everyday racism experienced by Australian citizens, the battle between fear and compassion is far from over.

– See more articles on Australia at The Canary Global.