As riots spread across the US, angry Americans plan further action to shake up their broken system [OPINION] - Canary 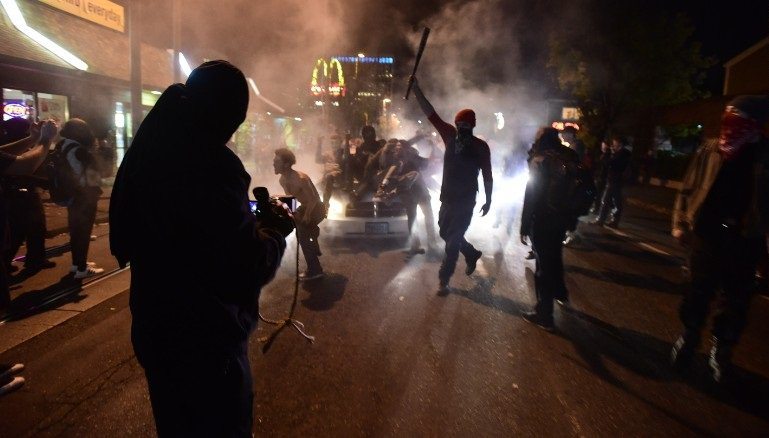 The shock of a Donald Trump victory in the US presidential elections may finally jolt Americans into rethinking their country’s political structures. And the post-election riots, along with plans for a general strike, may well be an outlet for citizens’ democratic frustrations.

The shock to the US political system

The US model of democracy, meanwhile, is not just flawed. It’s also an insult to the intelligence of American citizens; the idea that an occasional choice between two corporate-funded parties is democracy.

While Trump may have convinced some voters that he was an anti-establishment candidate, he very much represents the establishment. A slightly different one from the one that Hillary Clinton represents. But still an establishment.

He also represents both racism and misogyny, and that is one of the reasons there has been so much uproar in the US since he won. Within hours of his victory, there was a surge in hate crimes, and many more reports are still coming out.

On the evenings after Trump’s victory, riots and mass protests erupted across the US in scores of cities. These included Baltimore, Tucson, Portland, Austin, and Oakland. And there were also reports of similar protests in New York, Chicago, Philadelphia, Boston, Washington DC, St. Paul.

In Portland, for example, 4,000 protesters took to the streets, and there were eventually clashes with police officers. In Los Angeles, meanwhile, thousands of high-school children took strike action in protest against Trump. And some angry demonstrators were clearly angry with the horrific choice presented to them in this year’s elections, shouting “no more presidents” (see video below).

Now, a general strike is planned to coincide with the very day when Trump assumes the reins of power – the presidential inauguration day of 20 January 2017.

How effective and widespread the general strike would be is still unclear.

Resistance is nothing new

Mass protests, rioting, and even strikes are all features of US history.

For example, there was the Seattle general strike of 1919, with the Industrial Workers of the World playing a pivotal role. Then, in the 1960s, Students for a Democratic Society organised against the Vietnam War. And other anti-Vietnam war actions were conducted by The Weatherman (aka The Weather Underground, or The Movement).

More lately, the Occupy movement made its mark, too, highlighting the consequences of austerity and social and economic injustices.

Greek economist Yanis Varoufakis has described Trump as a “clear and present danger”. He says the President-elect is likely to encourage a far-right, extremist resurgence in many parts of the world, particularly in Europe, as forewarned by Canary Global Editor Nafeez Ahmed.

Independent journalist Paul Mason, meanwhile, argues that worldwide solidarity is now of the utmost importance. He also says that Trump is a champion of white supremacy that has to be dealt with:

As in the UK, the racist right in America is a minority that can and must be defeated. It’s about re-forming the political coalition that won both the New Deal and the second world war.

Not forgetting, too, the threat that Trump – as a climate change denier – poses to our planet.

In the 2016 elections, however, the message was clear. ‘No one’ would have clearly won the election over both Trump and Clinton. While there are a number of reasons for not voting, almost half of the electorate decided that neither main candidate was worth voting for. And who could blame them, with the horrific choice offered by the Democratic and Republican parties?

The big question, however, is how to mobilise the people who were inspired by neither major candidate. Because, if they were politically involved in fighting against the establishment, they would easily have the power to ensure that neither Trump, nor Clinton, nor any other establishment candidate could rule over American citizens again.

– For more tweets from day one in Trump’s America, see here.