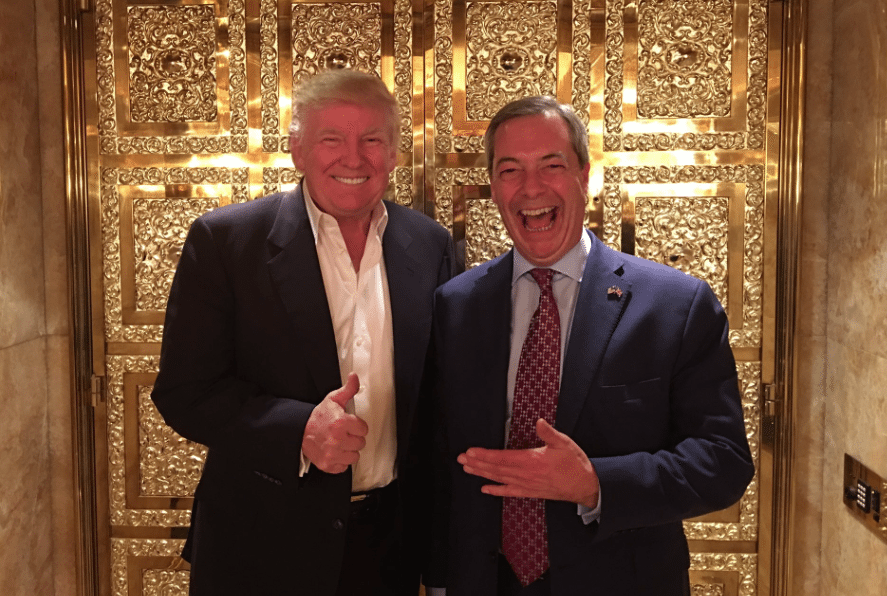 The first UK politician to meet President-elect Donald Trump was UKIP interim leader Nigel Farage. The pair announced the much-vaunted breach of protocol with a laughing image of themselves inside a golden elevator in Trump Tower, New York. But on closer inspection, there is a something very wrong with this image. And it’s a lesson from history.

It was a great honour to spend time with @realDonaldTrump. He was relaxed and full of good ideas. I'm confident he will be a good President. pic.twitter.com/kx8cGRHYPQ

As author Robert Harris points out:

This was Hitler’s elevator at the Berghof to the Eagle’s Nest. Just saying. pic.twitter.com/5OiOjKUlJv

‘So Hitler and Trump both had a liking for gold-plated elevators, so what?’ you might ask. Well, it’s not the first dog-whistle to the far right (known for its use of tacit symbolism) that the Trump camp has made since its victory on 9 November.

Trump team official says @Reince will make the trains run on time. Does he know this is a reference to Mussolini fascism? pic.twitter.com/27VNOBVQTE

But symbolic echoes aside, the Trump White House is shaping up to be an explicit right-wing horror show.

First of all, Vice President Mike Pence believes homosexuality is a disease that can be cured with ‘gay therapy’. He also called for public funds for HIV treatment and support to be diverted to such ‘cures’. As he put on his campaign website in 2000:

Congress should support the reauthorisation of the [HIV funding] Ryan White Care Act only after completion of an audit to ensure that federal dollars were no longer being given to organisations that celebrate and encourage the types of behaviours that facilitate the spreading of the HIV virus. Resources should be directed toward those institutions which provide assistance to those seeking to change their sexual behaviour.

Meanwhile, Trump has appointed far-right Breitbart propagandist Steven Bannon to be his chief political strategist. Here are just some of the racist, sexist and antisemitic headlines that sum up Bannon’s time at Breitbart:

THERE’S NO HIRING BIAS AGAINST WOMEN IN TECH, THEY JUST SUCK AT INTERVIEWS

This operation of manipulating the media is very familiar. It is the modern-day equivalent of the Nazi Party’s antisemitic tabloid newspaper Der Stürmer. It’s taking legitimate grievances to the political and media establishment while simultaneously scapegoating those determined untermenschen (inferior people) by the American right – people of colour, non-Christians, LGBT people, and left-wing activists.

The liberal media reaction to Trump nominating Reince Priebus as his Chief of Staff has been perhaps the most acutely bizarre. He is being trailed in all liberal news sites as a mainstream Republican figure, and proof that Trump is reaching out beyond his base. But Priebus is far from any kind of moderate. He has argued that “the facts say” that children with same-sex parents do worse in life, despite the scientific research on the matter saying the exact opposite. He is to the right of Trump on abortion, and has provided political cover for racist, sexist and homophobic behaviour by Republicans during his tenure as Chair of the Republican National Committee.

With each new appointment announced by President-elect Trump, we get a clearer view of his intention to deliver on the worst elements of his campaign. All the while, as minorities and Trump’s untermenschen feel a growing sense of panic, some in the liberal media are telling them they’re being alarmist. Or worse. That they should be holding out the hand of friendship to Trump voters. Listening and understanding their hurt feelings. And avoiding insults like bigots and racists.

It is also worth a look back at the history books to see that this is not the first time the liberal media has betrayed human decency to placate the far-right. This was how The New York Times reported on Hitler in 1922:

People of colour, ethnic minority communities, and LGBT people do not have the pleasure of being allowed to forget these historical lessons. They are written in our blood. We know what happens when the far-right gets into power. We are blamed, beaten and harassed. And we lose our jobs, positions, and lives. At the same time, the number of people willing to stand with us dwindles to almost nothing. Then, when the far-right falls, we rise and we forgive; we hear the apologies and the promises of ‘never again’.

We must not forget the past

But now, we are at another precipice. Again, people are telling us that our worst fears will never, and could never, come true. Again, we wish we could believe you. But history instructs us otherwise.

So we will not wait and see, or curb our anger, or still our activists. Not while fascism is on the rise. Anyone asking us to do so needs to stop dead in their tracks right now. Either join the fight, or get the hell out of the way.

– For some of the hate crimes already experienced since Trump’s election, see here.