Israel's far-right are gaining strength, and threatening to wipe out Palestine completely - Canary 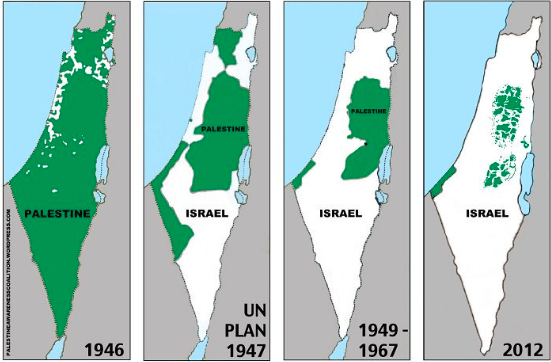 In the last week, Israel has been cementing efforts to legalise illegal land grabs of privately-owned Palestinian land. And this doesn’t only make the ‘two state’ solution to the Israel-Palestine conflict less likely. It’s also making an exclusively Jewish Israeli state a reality.

On 13 November, Israel’s parliament considered two bills. The first was a draft bill to legalise unauthorised settlements built on private Palestinian land by rogue settlers. And it will become law if it is ratified by the Supreme Court.

The second was a bill limiting the volume of the call to prayer from mosques throughout Israel, backed by Israeli Prime Minister Benjamin Netanyahu himself. It would reportedly stop the use of public address systems for these calls to prayer.

The Palestinian Authorities have denounced both bills. Independent thinktank the Israel Democracy Institute, meanwhile, has called the potential banning of the call to prayer a threat to religious freedom. And in many respects, this is indeed another way in which Arab Israelis will experience further discrimination.

These moves signify the pace with which Benjamin Netanyahu’s Likud Party, the most right-wing government in Israel’s history, is now advancing.

The building of settlements used to be a relatively bureaucratic process, which restricted the number of larger settlements created. But settler leaders, as well as the Israel Defense Forces (IDF), tended to ignore the laws around it. And Netanyahu often turned a blind eye to their construction. He actually started to legalise those built on state land. It was only the courts that ordered the evacuation of any built on private Palestinian land.

If the Israeli parliament’s first bill becomes law, all informal outposts will be legal. This includes where armed settlers have forcibly taken over Palestinian homes.

The settler project, a movement many previously considered a fringe group, has now gained a voice in the upper echelons of power. Through the Temple Mount Institute, which is funded through Netanyahu’s government, Jewish settlers are seeking free access to Temple Mount to build a ‘third temple‘ on the site of the al-Aqsa mosque, the third holiest site in Islam. In other words, they are defying the original laws laid down by Israel’s own supreme religious body.

The settler movement’s rise in power has happened despite strong criticism from the international community, including the US.

International law considers all settlements built on occupied land to be illegal, and a blockade to the peace process and the two state solution.

Despite outward condemnation, the US continues to reward this deliberate flouting of international law through military aid. The Obama Administration, though supposedly more critical of Israel’s actions, increased its ‘aid’ package to Israel to the tune of $38 billion.

Meanwhile, settlement building is spiralling out of control. According to figures in 2013, 400,000 settlers live in the West Bank, while the Palestinian population numbered 1.5 million. The Israeli housing minister at the time estimated that the number of settlers would increase by 50% by 2019.

Some see the swelling Jewish populations on occupied land as a justification to redetermine the borders of the Palestinian state. According to 1948 definitions, this would mean the occupied Palestinian territories of East Jerusalem, the West Bank and Gaza. But Israel has interpreted ambiguous wording from George W Bush’s administration to mean that those borders were now no longer reasonable considering Israel’s subsequent expansion.

The new Republican administration of Donald Trump now also reflects this stance. And the Israeli right will count on Trump to step back from the two state solution. For instance, since the announcement of the new President-elect, the powerful Jewish lobby group AIPAC has altered wording on its website, dropping support for a two state solution.

All this adds up to a reality the far-right in Israel wants to see. And the right-wing US administration has the power to make it happen.

The solution to the Israel-Palestine issue doesn’t hinge on a two state solution. But it does hinge on the rights and democracy of Palestinians. Currently, the occupiers are increasingly subjugating Palestinian rights with aggressive settlement building. And a previous fringe movement is now becoming the main driving force of policy, and gaining complete protection from the rule of law. The rights of Palestinians, as well as Arab-Israelis and Muslims living in Israel, are becoming little more than a secondary consideration. Israel is essentially becoming an apartheid state.

The international community, and in particular the US, now has a responsibility to rethink its position. That is, if it is truly interested in peace in the Middle East.