Thanksgiving is a story of betrayal, and this year America's betrayed are fighting back [TWEETS] - Canary 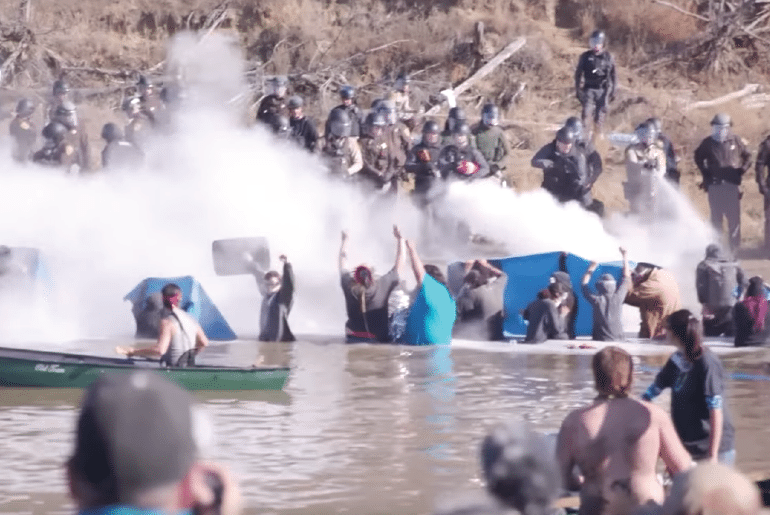 The US holiday of Thanksgiving is when the descendants of European migrants celebrate the time when their starving pilgrim ancestors were saved by Native Americans. Current Native Americans have a different perspective on the holiday. One of betrayal. Of land grabs and injustices that were inflicted upon them by European settlers. And this year, that perspective is particularly important. Because at Standing Rock, indigenous Americans are once more standing up to an invasive, outside force. And their struggle has given rise to the hashtag #ThanksTaking.

Many people are using the hashtag to show their support for the Standing Rock protest.

To my people who are out there speaking and standing up to protect the water, thank you from the bottom of my heart. #NoDAPL #ThanksTaking

People are also standing up to the poisonous irony of ‘Thanksgiving’.

Don't forget to give thanks for your white privilege #thankstaking #noDAPL

Fam: Please let there be no #Thanksgiving in your home without explaining #StandingRock to the little ones. #NotThePast #Thankstaking pic.twitter.com/PeBEdRA3lV

And avoiding blind engagement with Thanksgiving is important. Because countries that ignore their pasts are unlikely to learn from them. This is true of countries like the US, Britain, and Japan.

Germany, on the other hand, has sought to avoid this problem by teaching children exactly what it did in the past. And perhaps because of this, the country has recently shown a much kinder approach to refugees than many of its neighbours.

Support on the ground

But there are many Americans now standing alongside Standing Rock protesters on the ground. In fact, activists have been lending support to Native Americans there for weeks and months. And even US military veterans are pledging their allegiance, using crowdfunding to support their efforts:

We are veterans of the United States Armed Forces… and we are calling for our fellow veterans to assemble as a peaceful, unarmed militia at the Standing Rock Indian Reservation on Dec 4-7 and defend the water protectors from assault and intimidation at the hands of the militarized police force and DAPL security.

The funds we raise on this page will go towards providing food, transportation and supplies for the brave patriots that come and stand with us.

The true spirit of solidarity

While the legacy of colonial land grabs in the US lives on through Thanksgiving, there is also an element of human solidarity in the holiday. And many ordinary Americans are now focusing on that element, offering their support to Native Americans without expecting anything in return. Increasingly, that means the battle for Standing Rock is no longer just a stand-off between Native Americans and the US government. The American public and America Incorporated are also in direct conflict.

Native Americans are still the ones with the most to lose in this fight. And the ones who have fought the hardest and longest. But many US progressives are now showing that, for them, an assault on one group in society is an assault on all groups. In other words, in the fight against corporate tyranny, we can either stand together or fall apart.

– Read more from The Canary on the pipeline protests.

– Follow the protests online, and find out how to support them.