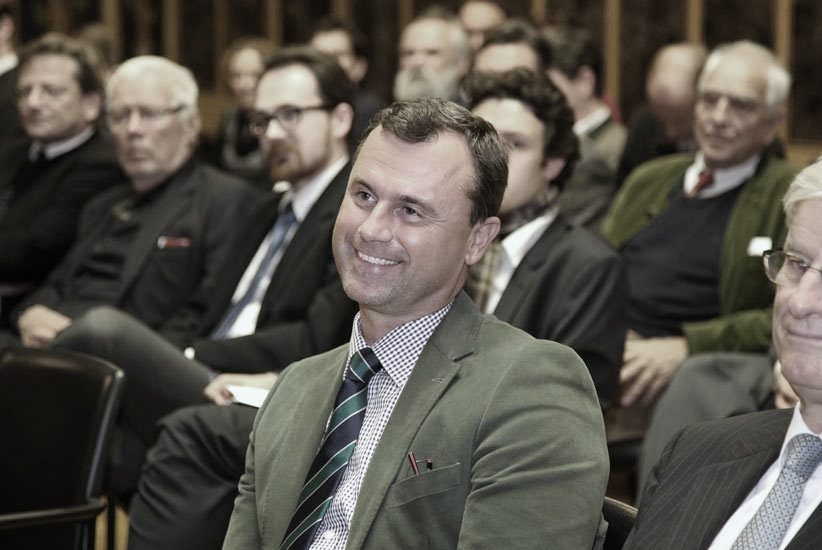 If Hofer triumphs in this rematch, he will be the first far-right president to win an election in the history of the EU.

Here are ten reasons why we should all be alarmed if he becomes president:

The Austrian Freedom Party (FPÖ) was founded by old Nazis and German nationalists in the 1950s. Its first leader was former SS officers Anton Reinthaller and Herbert Schweiger. One of former leaders, Joerg Haider openly praised the employment policies of Nazi Germany and its SS henchmen.

2) He’s nostalgic about Austria’s Nazi past

Hofer likes to distance himself from the Nazi dream of a Greater Germany. But until recently, he made a habit of wearing a symbol beloved of Austrian fascists: the blue cornflower. These flowers were first worn by nationalists wanting to unite all the German-speaking peoples of Europe. They also served as a clandestine fascist symbol in the 1930s when the Nazi Party was illegal in Austria.

At the same time, the FPÖ presidential candidate is clearly comfortable around people who do believe in the idea of a Greater Germany. He is an honourary member, for example, of student fraternity Marko-Germania zu Pinkafeld, whose 1994 founding document rejects the “history defying fiction of an ‘Austrian nation’”.

3) He is an anti-migrant gun-lover

Hofer often carries a Glock 9mm handgun in public and boasts “I just love to shoot”. He has also said rising gun ownership is a “natural consequence” of immigration. And he takes his four kids to shooting ranges.

4) He fans the flames of Islamophobia

The FPÖ candidate has said that “Islam has no place in Austrian society” and suggested that banning the burqa (a controversial policy already in place elsewhere in Europe) “makes sense”.

5) He wants to exert more control over Austria’s parliament

Although the Austrian presidency is mostly ceremonial, Hofer has threatened to dissolve the country’s parliament if the government does not act against immigration. He insisted in a TV debate in May “you will be surprised by what can be done”.

6) He believes God is on his side

Hofer’s campaign posters proclaim “so help me God”. And he has not allowed religious leaders (who have insisted that God favours protecting the weak, especially refugees) to put him off.

Far-right activists calling themselves the Identitarian Movement attacked pro-refugee plays and targeted the Green Party in the run-up to the first presidential election. And FPÖ leader Heinz-Christian Strache has shared their videos, while Identitarian activist have run for office for the FPÖ.

8) Victory in Austria would encourage the far-right across Europe

The first far-right head of state in the EU would embolden the leader of the French Front National, Marine Le Pen. She is already expected to reach the second round of next year’s presidential election. It would also give succor to the Dutch Freedom Party (PVV) and Germany’s Alternative für Deutschland (AfD).

9) His party is homophobic and bigoted

The FPÖ manifesto [pdf] only recognises families made up of a man and woman with common children. It rejects same-sex marriage. And it opposes “preferential treatment of a gender to overcome actual or perceived discrimination”.

10) It wants cultural uniformity in Austria

The manifesto also insists that Austria is “not a country of immigration”. For the FPÖ, Austria should only give migrants residency and citizenship if they “set down cultural roots” in the country. It has promised to “take action to maintain and develop our dominant culture”.

And the culture that the FPÖ wants Austrian inhabitants to follow, it seems, is one where: they don’t challenge inequality; they oppose religious freedom; they discriminate against people according to their sexual orientation; and they look fondly on the country’s Nazi past.

That’s why a victory for Hofer would be particularly worrying. And it’s why Paul Mason stressed earlier in the year that:

As Europe dithers in the face of the authoritarians and racists, the populations in the mature democracies that founded the EU should insist: our grandparents didn’t defeat fascism in 1945 to see it weasel back into the mainstream now, dressed in suits instead of uniforms

– Support Stand Up To Racism, and oppose racism on the streets.

– Support The Canary so we can keep resisting the global rise of the far right.