A homeless man 'freezes to death', and The Sun’s response is appalling [OPINION] - Canary 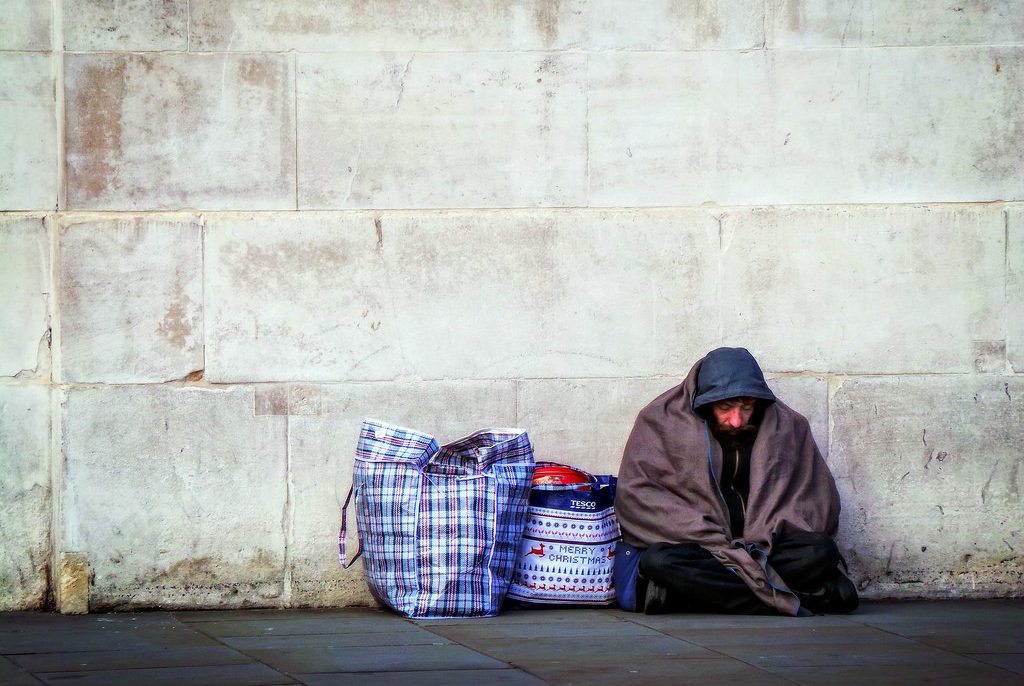 A homeless man has ‘frozen to death’ on the streets of Britain, on the coldest night of the year so far. His body was discovered outside a Birmingham city centre car park late on 29 November. But for The Sun, he was apparently just another drug-taker.

While the tragedy has been covered by most of the tabloid press, The Sun chose to go with the headline “homeless drug user”. That the man’s entire life and existence should be defined in such a way is appalling. He was a human being, only 30 years old, and a resident of our country. And he died in tragic circumstances. But for the Murdoch-owned newspaper, the first priority was to highlight that he used drugs: 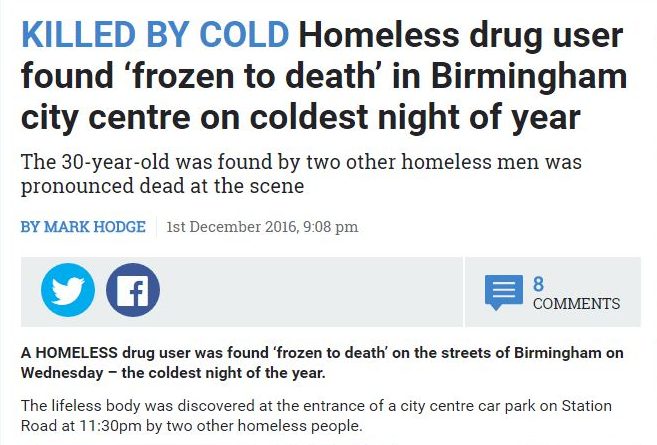 The suggestion being that using drugs somehow lessens the controversy of someone dying on Britain’s streets.

The Sun doesn’t clarify what drug (or drugs) the man was alleged to have used. Its black and white headline suggests that all drugs are the same – from occasional cannabis to regular use of intravenous drugs.

It also fails to account for ’cause and effect’. In the case of ‘hard drugs’, a recent study has shown the overwhelming links between childhood trauma or abuse and later intravenous drug use in the US. openDemocracy referred to it as “the 4600% factor”, saying:

If you’ve suffered childhood trauma, you’re 4600% more likely to become an injecting drug user than if you haven’t.

In short, society seems to condemn those born into the most horrific of situations, and then make it almost impossible for them to achieve anything better.

In recent years, the right-wing press have been relentless in their campaign to demonise foreigners, ethnic minorities, refugees, drug-users, the LGBTQ+ community, people on benefits, and the list goes on. They seek to justify inhumanity and barbarism, and to diminish the suffering these groups experience. It is nearly always supposedly the victims’ fault, in some shape or form. And as in this case, it doesn’t take much to sow the seed of blame – just deliberate use of an evocative word or two in a headline.

In England, 114,790 households applied to their councils for homelessness assistance in 2015/16, an 11% rise since 2010/11. This year, food bank usage was at a record high. Considering that Britain remains one of the richest countries in the world (or one of the largest economies, at least), however, none of its citizens should have to exist in abject poverty. There is more than enough money. And more than enough housing. The problem is that families and corporations that don’t really need it are the ones who own a large chunk of it. And they seem to value such commodities more than human life.

The UK has a higher proportion of its population in relative low income than most other EU countries: of the 27 EU countries, only four have a higher rate than the UK. The proportion of people living in relative low income in the UK is twice that of the Netherlands and one-and-a-half times that of France. More than half of all low-income households are paying full Council Tax, noticeably higher than in the mid-1990s.

Over the last decade, the poorest tenth of the population have, on average, seen a fall in their real incomes after deducting housing costs. This is in sharp contrast with the rest of the income distribution, which, on average, has seen substantial rises in their real incomes. The richest tenth of the population have seen much bigger proportional rises in their incomes than any other group.

The Birmingham Mail reported that a customer of the nearby Victoria pub found the deceased person’s body. Other reports, including The Sun‘s, stated that two other homeless men discovered the body while huddled alongside him in the car park. According to this account, they contacted the emergency services, and paramedics pronounced the man dead on arrival.

Recent figures claim that there are up to 10,000 homeless people currently in Birmingham alone.

West Midlands Police have stated that a drug overdose may have caused this death. The Sun was only too keen to tout that ambiguity, to paint its desired picture. But common sense might suggest that being homeless, abandoned by a society that devises ways to make your life even harder, and being left to freeze in the -6°C reported in Birmingham that night might have also had something to do with it.

– Support charities actively combating homelessness in the UK, such as Crisis, Shelter, and Emmaus.

– Support groups seeking to help those suffering from addiction and other mental health issues, such as Lifeline and Action on Addiction.

UPDATE: Changed from “10,000 people sleeping rough” to “10,000 homeless people” on 5 December 2016 to reflect the difference between homelessness and sleeping rough.