Depressed as hell that President Trump is happening? You need to watch this [VIDEO] - The Canary 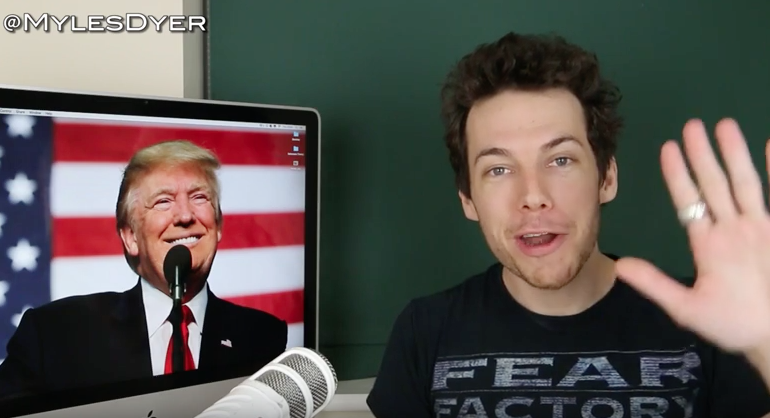 With the inauguration of Donald Trump as US President, many are feeling disillusioned and depressed today. But a response video produced by commentator Myles Dyer might just be the tonic we all need.

Dyer lays out five simple steps that each of us can take to deal with the day, and the next four years, powerfully.

First, Dyer urges us all to avoid the gnawing temptation to look away. The sense of impotence we experience when our political landscape looks as dark as it does today can result in resignation and apathy. We can instead choose to get active and involved.

There are many groups out there fighting the good fight every day. You can join them. With your support, they stand a greater chance of having an impact. In return, you get the sense of moving from being a spectator of events to being an empowered participant in building a better world.

Stick to the issues

In an ever more partisan world, it can be tempting to throw labels around rather than ideas. The problem is that these labels mean different things to different people. It helps to take the time to explain your idea, or what you find unworkable about someone else’s, without dismissing them or it out of hand with a label. Not easy, but far more effective as a means of communicating – especially in disagreement.

This is an extension of freeing oneself from a tribalist mindset. Dyer points out the refusal of Obama supporters to engage with criticism of unacceptable elements of his presidency – corporate cash, the rise of the surveillance state, assassination programmes. We should have the intellectual and moral honesty to praise and condemn the good and the bad, whomever the instigator.

It’s time to hold politicians to account. Furthermore, you can make this happen. You can do so by learning about how our political systems work, what levers of accountability exist, how to use them, and then by using them!

It’s time to get to it

Dyer has produced a superb ‘How To’ guide to being a responsible citizen and taking power back in the face of what seems to many as a fait accompli. We’ll be taking his advice. We encourage you to do the same.

– Read and support new media organisations that follow Dyer’s five steps. Please add more that you like in the comments.