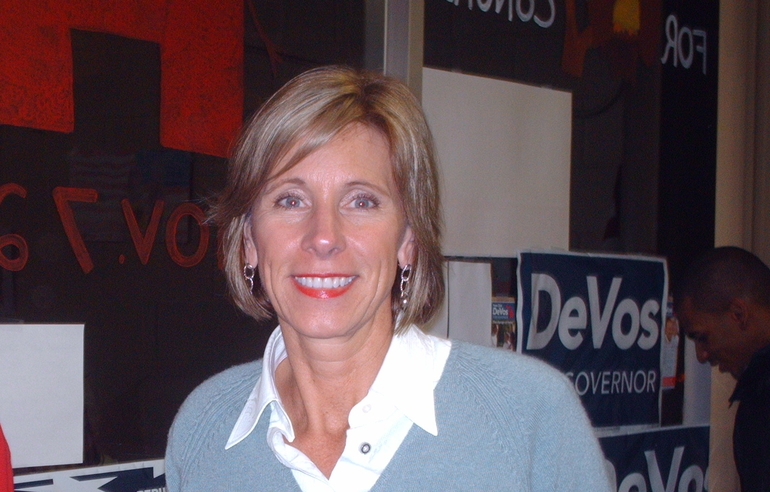 Wealthy Republican donor Betsy DeVos has been confirmed as US Education Secretary. She has no experience in public education, and is now in charge of nearly 100,000 schools. But it’s not just her lack of relevant experience that should worry the American people. It’s her political and religious agenda.

Politically, DeVos is a proponent of vouchers and charter schools (similar to Britain’s academies) as alternatives to traditional non-private schools.

The cost to teach a public school student for one year is $10,615. An education voucher allows parents to apply that money to a private or religious school. They might do so if they live in an area with bad public schools. Or if they want their child to get a specific kind of education. DeVos argues that vouchers give at-risk kids a better chance of getting the education they deserve. With a voucher, they can attend a school which they wouldn’t otherwise have access to.

I think the record shows that part of her commitment to vouchers is her strong religious beliefs. She has a desire to funnel money away from public schools… which in my opinion raises some First Amendment concerns.

There is a danger in siphoning dollars away from public schools. One survey found that most states provide less support per student for elementary and secondary schools than before the Great Recession. These funding cuts endanger chances of improving teacher quality, reducing class sizes, expanding learning time, and providing high-quality early education.

DeVos’s support for vouchers, then, could do some serious damage to America’s public education system. What’s worse is that President Trump has called public education “a government-run monopoly”.

DeVos’s use of soundbites such as ‘school choice’, meanwhile, may really be doublespeak for taking money away from public schools. Randi Weingarten, president of the American Federation of Teachers, said:

Her endgame has been making money off of public schools, and frankly, privatizing. Others have said her endgame… was to displace public schools as the center of community and replace [them] with Christian education…

The religious motivations of Betsy DeVos

US founding father Thomas Jefferson supported “building a wall of separation between Church & State”. And this secularist principle is enshrined in the First Amendment of the US Constitution: “Congress shall make no law respecting the establishment of a religion…”

But DeVos may mean trouble for the Church/State separation. And what is troubling is the prospect of parents being given taxpayer money to send their kids to a private religious school. Americans United for Separation of Church and State wrote a profile of DeVos back in 2010:

She comes from a politically active, socially conservative family. Her parents are Elsa Prince Broekhuizen and the late Edgar Prince, a Michigan couple that has funded the Religious Right for years.

The Princes have provided huge sums to both Focus on the Family and its quasi-affiliate, the Family Research Council (FRC).

The FRC is infamous for opposing LGBT rights (such as same-sex marriage, same-sex civil unions, and LGBT adoption). It also lobbies against abortion, divorce, embryonic stem-cell research, and pornography. On its website, it says:

Family Research Council believes that homosexual conduct is harmful to the persons who engage in it and to society at large, and can never be affirmed. It is by definition unnatural, and as such is associated with negative physical and psychological health effects.

Yet another reason for concern

The Center for Inquiry has written about DeVos’s own religious convictions, and why the American people should be concerned. It insists:

[Her] focus on religious schools is not by coincidence: Ms. DeVos has referred to her work as a way to “advance God’s kingdom,” and devoted significant resources to advancing conservative Christian values in schools. Will Ms. DeVos consider this a central part of her work as Secretary of Education? To advance a sectarian agenda from the Department of Education would be both detrimental to students’ education and blatantly unconstitutional.

In short, we can see once again with DeVos’s appointment how Trump has been putting some of the most unsuitable, regressive, and dangerous people in positions of immense power and influence. His administration is ready not only to dismantle environmental protections, but also to wreck the public education system. And it will take all the strength of US civil society to limit the damage it looks set to cause.