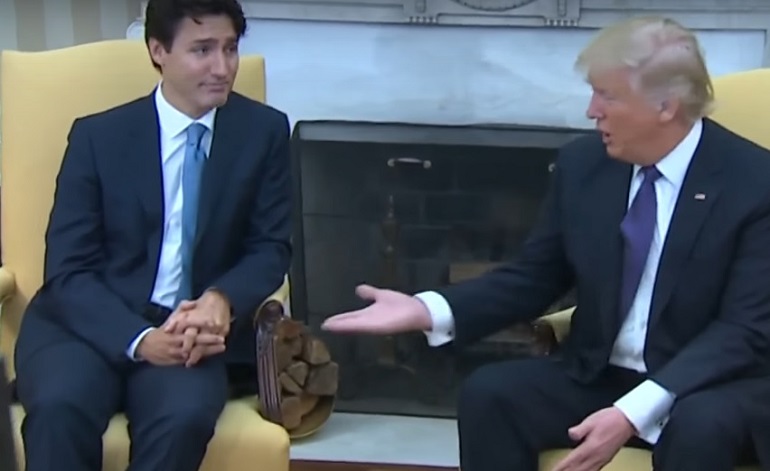 Canadian Prime Minister Justin Trudeau visited Donald Trump on Monday 13 February. And much was made of how Trudeau and Trump shook hands. In fact, the misleading image above quickly went viral. But funny memes aside, there are currently very real tensions between the two North American leaders.

The shot of Trump and Trudeau, taken just before they shook hands, appeared to suggest that the Canadian leader was unsure about following in the footsteps of Japanese Prime Minister Shinzo Abe – who suffered through a 19-second-long handshake during his recent meeting with the US President. In the end, however, the handshake between Trudeau and Trump was nothing to write home about.

But that’s not to say there aren’t very real tensions between Canada and the US at the moment.

Canadian citizens have already come out in force against Trump and his policies. So there’s real pressure on Trudeau – who won a landslide victory in 2015 on the back of progressive promises – to echo that sentiment. And the Canadian PM has obliged, to a certain extent. He has emphasised inter-faith unity against all forms of terrorism, for instance, in clear contrast to Trump’s divisive rhetoric and policies.

And he didn’t try to sweep his concerns totally under the carpet during his visit to the US. When he received a question about Trump’s ‘Muslim ban’, for example, he made it clear that he wasn’t a fan. But he remained diplomatic, saying:

there have been times where we have differed in our approaches… [but] the last thing Canadians expect is for me to come down and lecture another country on how they should be governing themselves… My role and our responsibility is to continue to govern in such a way that reflects Canadians’ approach and be a positive example in the world.

The unspoken suggestion being, of course, that Trump is setting a negative example.

In short, the differences were obvious. And Trump and Trudeau’s joint statement fell far short of talking about a “common vision”, which the Canadian leader and former US President Barack Obama claimed to share.

How long can Trudeau keep his cool?

I’m never going to shy away from standing up for what I believe in — whether it’s proclaiming loudly to the world that I am a feminist, whether it’s understanding that immigration is a source of strength for us and Muslim Canadians are an essential part of the success of our country today and into the future.

Considering that the new US administration seems to have very different beliefs and priorities, the big challenge for Trudeau now will be to see how long he can keep his diplomatic cool. And that won’t always be an easy task.

– Read more from The Canary on Canada and Justin Trudeau.