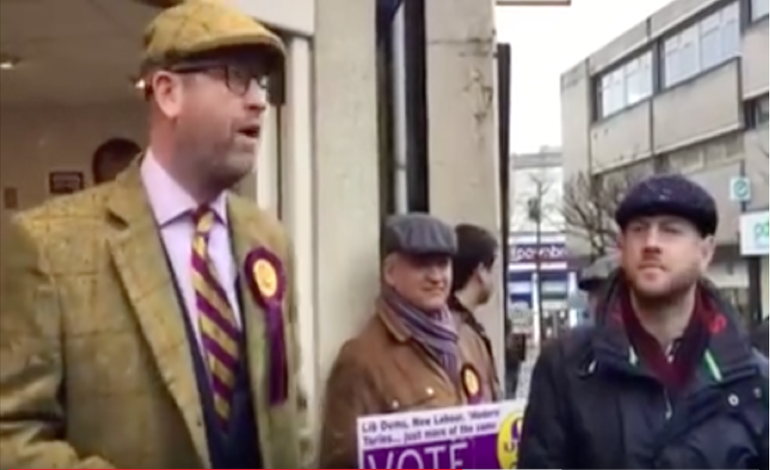 Paul Nuttall’s dreams of a seat in parliament lay in tatters today, but Twitter isn’t exactly teeming with sympathy for the UKIP leader. Instead, they’ve turned a UKIP campaign event into a complete fiasco.

Nuttall on the ropes

Police are investigating the UKIP leader over allegations of electoral fraud.

An investigation by Channel 4′s Michael Crick revealed that the Stoke property Nuttall named as his home in campaign documentation was in fact empty. The confrontation between the two left Nuttall’s campaign in tatters.

UKIP's Paul Nuttall asked why he listed residence he's never been to as current "home" on nomination form. Party said he was moving today. pic.twitter.com/Q8kq1BekrS

Meanwhile, other scandals refuse to go away.

First, the UKIP leader claimed to hold a PhD from a university that has no record of it.

Second, Nuttall has made bold statements on the future of the NHS. The UKIP leader removed the post from his website, but screenshots still circulate widely. In the post, he argues:

The very existence of the NHS stifles competition, and as competition drives quality and choice, innovation and improvements are restricted.

Therefore, I believe, as long as the NHS is the ‘sacred cow’ of British politics, the longer the British people will suffer with a second rate health service.

And most recently, Nuttall was forced to admit he had lied about losing close friends in the Hillsborough disaster.

UKIP leader Paul Nuttall admits that claims on his website that he lost a "close personal friend" at Hillsborough are false pic.twitter.com/bnNKm29IsU

People have now flocked to the hashtag #AskPaulNuttall, to have a laugh at the expense of the UKIP leader. Nuttall set up the hashtag to engage with the voters of Stoke. But things did not go as planned.

#askpaulnuttall On a scale of 1-10, how welcome are you going to be back in Merseyside? pic.twitter.com/FbbbM8O3iI

#AskPaulNuttall – If you had the power to make one of the lies you've told come true, which would it be and why?

Others used Nuttall’s apparent honesty issues as the set up.

How was it being one of the first in the Iranian Embassy? pic.twitter.com/kvmkj1OVVm

Nuttall’s campaign will definitely be remembered. At least he can console himself with that.