Parents claim their kids' school is being forced into an academy, and they're fighting back - The Canary 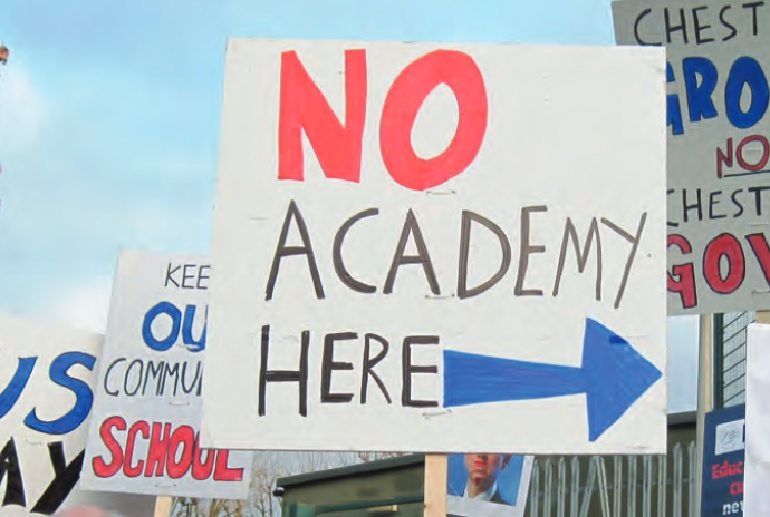 A battle is underway between parents and the governors at a school in Sussex. The school board wants Castledown Primary in Hastings to become an academy by September 2017. But the Hands Off Castledown group has other ideas.

In January, Castledown announced its intention to join the Ark academy trust. Academies are funded by the government and overseen by ‘charitable’ bodies. But they operate independently of local authorities and the National Curriculum.

The Ark group already runs several other schools in the area. Richard Sage, chair of governors at Castledown, explained that the governors decided after meetings with various trusts that Ark was best for the school. He added:

We felt it was important to move rapidly to ensure the school is delivering the highest possible quality education for Castledown pupils as soon as possible.

A report on BBC South East Today revealed that Castledown is in the bottom 10% of schools for 2016 SATS exam results. Another Ark school in Hastings, Blacklands Primary Academy, went from being rated ‘special measures’ to ‘outstanding’ by OFSTED just three years after being taken over. The hope is the same for Castledown.

But according to Hands Off Castledown, results were poor because the 2014 curriculum was implemented two years too late. Pupils sitting the exams in 2016 had not received up-to-date teaching. And the group alleges that minutes from a governors’ meeting prove they were fully aware this would happen.

The group also disputes that Blacklands is a success. It says it has spoken to parents who removed their children from the school explicitly because of Ark. Speaking to The Canary, Liam (a parent campaigning with the group) said this is indicative of the wider Ark experience:

the Maths and English heavy curriculum at Ark… leaves very little room for anything else and Ark have a history of imposing extremely restrictive and regimental behaviour policies which we believe are not suitable for young children.

Parents and teachers were told of the decision to convert to an Ark academy via a letter explaining the consultation period. But there are no consultations on any alternatives to Ark or academisation.

Ark was not available to comment on these allegations.

We believe by taking schools out of local authority control… educational performances are not necessarily improved and a less rewarding educational experience for students can be created.

Councillor Tania Charman even suggested the governors should resign. They oversaw Castledown’s decline, she argues, so should not decide its future. And on 7 February, campaigner Louise Hersee delivered a petition of over 1,000 signatures to East Sussex County Council opposing the academisation. It seems many people agree.

This article was amended at 12.05pm on 16 February. The chair of governors at Castledown is Richard Sage, not Richard Black as was originally written.