UKIP’s leader thinks he’s out of the woods, then he walks straight into another fiasco - Canary Workers’ Co-op 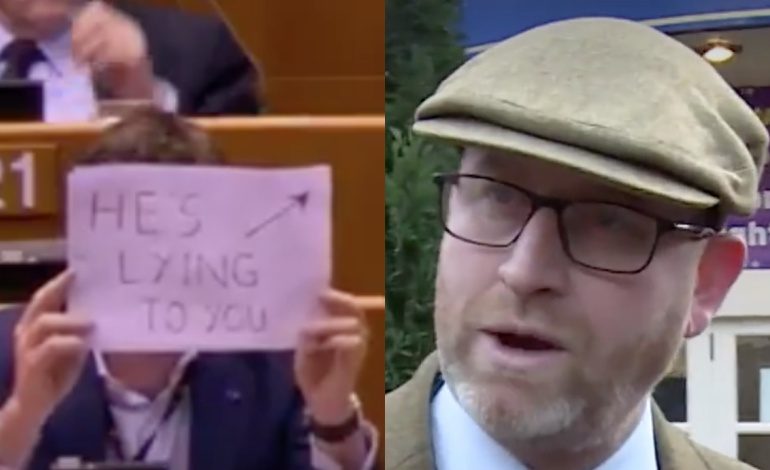 Under pressure on live radio, UKIP leader Paul Nuttall has admitted that claims on his website of losing “close personal friends” at the Hillsborough disaster are false.

The Hillsborough disaster was where a lethal crush at an FA Cup semi-final between Liverpool and Nottingham Forest took 96 lives.

Now, the Stoke Central by-election candidate appears to have been rumbled while attempting to cover up the public relations nightmare. His press officer for the past eight years, Lynda Roughley, took the blame. Roughley said she was “entirely responsible for the website post”, and offered her resignation. Nuttall turned the offer down.

In the aftermath, the UKIP leader said he was “genuinely taken aback” when the Radio City Talk host brought the claim to his attention.

But the comments did not only appear twice on the MEP’s personal website. The BBC also quoted him saying he had lost “close personal friends” at the tragedy.

Would Nuttall really be unaware that the biggest broadcaster of the day was quoting a statement signed in his name?

The story looks increasingly shaky. There were two different relevant posts on his website. The first, on 17 August 2011, read:

96 Liverpool fans including close personal friends of mine lost their lives.

This quote appeared on the same day on the BBC. The second, dated 19 January 2012, said:

Nuttall claims he has been oblivious to all three of these reported statements. So The Mirror asked a UKIP spokesman whether Nuttall ever reads statements issued in his name. The spokesman replied:

I think he was on holiday and it was a phone conversation.

When pressed about whether Nuttall was on holiday during the two separate false website claims, the UKIP spokesman said “I don’t know”.

This is far from the first time the UKIP leader has been caught out. Nor is it the first time he has blamed junior staff. Nuttall’s online CV falsely suggested that he had a PhD from Liverpool Hope University. But he claimed he had no idea about the information on his own LinkedIn account, blaming an “over-enthusiastic researcher”.

The MEP also repeatedly claimed that he had been a “professional footballer” with Tranmere Rovers. But the club said Nuttall had “definitely not” played for the team.

The UKIP leader responded by blaming a press officer again:

It was one press release in 2010, put out by a press officer, who knows nothing about football

But the claim also appears on a UKIP campaign poster.

Nuttall’s record suggests a shaky relationship with the truth. And it appears he has walked straight into more controversy after his Hillsborough claims.

Watch the embarrassing video clip where Nuttall falls into disaster live on air.

– Sign the online book of condolence for the Hillsborough victims.