As Trump dithers, Turkey issues an ultimatum to anti-Daesh fighters in Syria - The Canary 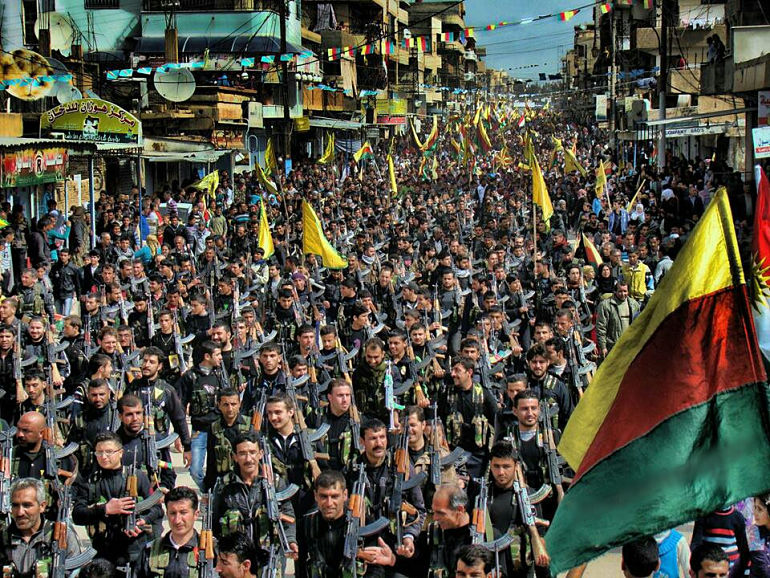 Kurdish-led militias fighting Daesh (Isis/Isil) in northern Syria have provided details this week of new attacks on villages which they had previously liberated from jihadi forces. But these attacks didn’t come from Daesh. They came from Turkey. And as Donald Trump dithers on the fight against Daesh in Syria, Turkey has issued an ultimatum to the Kurdish-led forces on the front line.

Our first goal is to complete the operation in al-Bab. Forces of the Free Syrian Army, supported by our armed forces, made significant progress. Russian and coalition aircraft also made their contribution. The second goal is the operation in Raqqa. We can send special forces there.

The Kurdish-led militias of the YPG (People’s Protection Units) – the main group in the multi-ethnic SDF (Syrian Democratic Forces) – have been slowly moving towards the self-proclaimed Daesh capital of Raqqa for many months. Turkey – which invaded Syria in August 2016 to stop SDF advances and is currently suppressing all opposition at home – now seems committed to blocking the SDF’s participation in the liberation of Raqqa.

Raqqa does not threaten the borders of Turkey, but if you allow PYD and YPG there, it will turn into a matter of national security for Turkey.

In other words, Turkey will attack Raqqa itself unless the main force in the SDF steps away from the fight against Daesh. (Remember here that high-level whistleblowers have accused Turkey in the past of actually supporting Daesh in Syria.)

Some reports suggest that this attempt to sideline the SDF is part of ongoing discussions between Turkey and the new US administration – which appears to have an increasingly confused endgame in Syria.

Mixed messages from the US

The Kurdish-led forces in Rojava (northern Syria) have been defending a secular, multi-ethnic, and feminist experiment in direct democracy since 2012. And since late 2014, increased media attention has forced the US to accept that the SDF’s component forces are among the most effective groups fighting Daesh in Syria. As a result, it has supplied them with limited support.

Donald Trump’s stance on the SDF and Rojava, however, has been ambiguous.

In contrast, an adviser to Trump recently announced that the Iraq-based Peshmerga will continue to receive support from the US. The Peshmerga is the armed force of the anti-democratic and allegedly corrupt Kurdish nationalist government of northern Iraq. Turkey has no problem with this regime, either.

In short, Trump looks like he may well go along with Turkish desires in Syria. But will he really risk a long-term victory over Daesh by allowing Turkey to sideline the SDF from the assault on Raqqa?

– Read more Canary articles on Rojava at The Canary Global.

– Donate to the Rojava Plan.