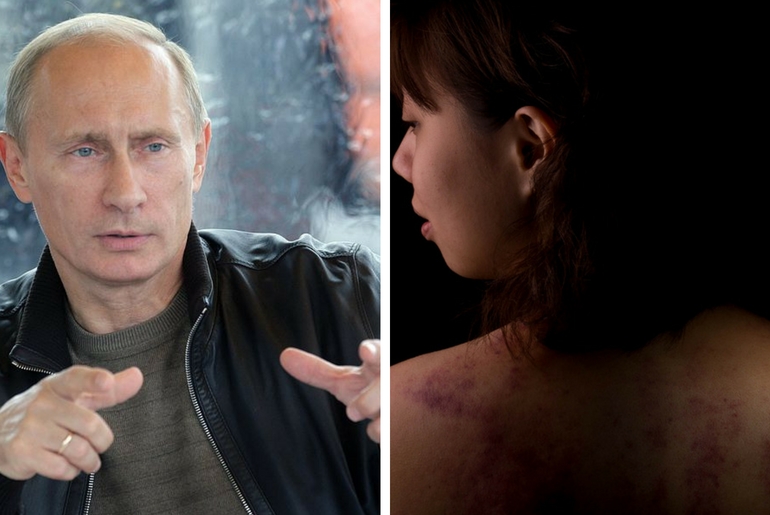 Amid all the fuss in the US about Team Trump’s suspected links with Russia, President Vladimir Putin’s government has just signed a bill into law that effectively decriminalises domestic violence. And this could well be part of a rising conservative tide in the world, seeking to roll back the clock on women’s rights.

Many Russian women were not surprised by the new law. Psychotherapist Natalia Tumashkova, who works with survivors of abuse in Moscow, said:

I do not think this new law will make the situation dramatically worse in Russia – the situation of victims is so bad already, this would be difficult.

An example of that situation came in 2015 from Anna Zhavnerovich, who works at a Moscow-based lifestyle website. She wrote an article detailing her experiences at the hands of her boyfriend and the police. She described how authorities failed to act and instead asked questions about her marital status.

According to The Sydney Morning Herald, 40% of violent crime in Russia already happens in family environments, and over 9,000 women died as a result of domestic violence incidents in 2013 alone. Russian government statistics, meanwhile, suggest that 36,000 women are beaten by their partners every day.

Under the new law, beating a spouse or child is no longer a criminal offence if it only happens once a year and doesn’t hospitalise them. Punishment is just a fine or 15 days in prison.

One of the MPs involved in the new bill, Olga Batalina, revealed the conservative social attitudes behind it. She said:

For us, it is extremely important to protect the family as an institution.

Some in Russia see legislating against domestic violence as state interference in family business. Others view it as an inconsistency that a parent or spouse could get harsher punishment than a stranger for committing the same crime.

But leaving victims of domestic violence with no other support or protection sends a big message. And the worry now is that this message will result in legitimation. The mayor of Yekaterinburg (Russia’s fourth largest city) suggests the law has already had an impact. Police are currently responding to 350 incidents of domestic violence daily, he says, compared to 150 a day before the law change.

Russia isn’t alone in conservative opposition to legislation against domestic violence. Armenia, for example, had its own bill – aimed at strengthening protection and prevention. But opponents attacked it as a liberal European attempt at “shattering the traditional roots of our families”. And the idea in both Russia and Armenia appears to be that liberal social movements are foreign to their Eurasian identity.

According to The Independent, a popular Russian newspaper recently published an article suggesting that survivors could be proud of being beaten because it would make them “more likely to give birth to boys”.

Russian women have been protesting the new law. But Western conservatives – themselves rolling back women’s rights – have been quiet on the matter.

A conservative fight-back appears to have begun worldwide. And the rights of vulnerable citizens are what’s at stake.