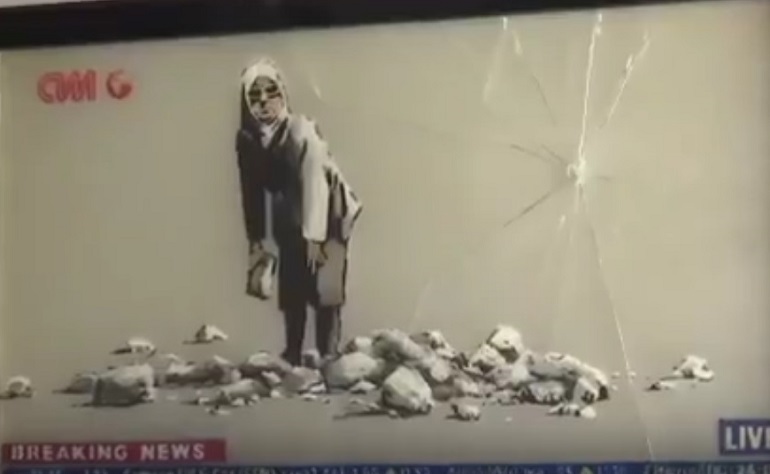 British street artist Banksy is no stranger to the Israel-Palestine conflict. And on Friday 3 March, he unveiled his latest project – a hotel just outside Bethlehem with a view of Israel’s infamous ‘apartheid‘ wall.

Described by The Guardian as “a hotel, museum, protest and gallery all in one”, the project is reportedly part of a plan to promote discussion about Israeli occupation. It also acts as a reminder of Britain’s own involvement in the 1948 creation of the State of Israel. Banksy insists:

It’s exactly 100 years since Britain took control of Palestine and started rearranging the furniture – with chaotic results… I don’t know why, but it felt like a good time to reflect on what happens when the United Kingdom makes a huge political decision without fully comprehending the consequences.

In 1917, British foreign secretary Arthur James Balfour wrote a letter to a leader of Britain’s Jewish community in which he affirmed that his government favoured the establishment of a “national home for the Jewish people in Palestine”. The rest is history.

Banksy’s hotel – in the style of a colonial gentlemen’s club – hammers home the point about Britain’s past interference in Palestine. And one exhibition even has a moving statue of Balfour signing his declaration.

The Walled Off Hotel

Banksy says his Walled Off Hotel – which is in an area under Israeli security control – has “the worst view of any hotel in the world”. This is because it’s only four metres away from the illegal apartheid wall that cuts through the occupied West Bank; and because the nine rooms and one suite all face the so-called “separation barrier”.

The hotel contains new works from Banksy, who is a longtime critic of Israeli occupation. It is staffed by local people. And it will also feature art from Palestinian artists.

The aim of the project is reportedly to attract tourism and create jobs in Bethlehem; all while fostering dialogue between young Israelis and the city’s Palestinian residents.

Welcome to Banksy's Walled Off Hotel in the West Bank, where every room features the world's worst view: pic.twitter.com/6l5Gucz1fZ

Israeli Apartheid Week has now come to an end in the UK, having this year highlighted the 50-year anniversary of Israel’s occupation of Palestine. But by bringing greater attention to one of the biggest symbols of that occupation – the West Bank apartheid wall, Banksy has helped to ensure that the conversation will continue.

– Read more on Palestine and Israel at The Canary Global. Also visit our Facebook and Twitter pages.