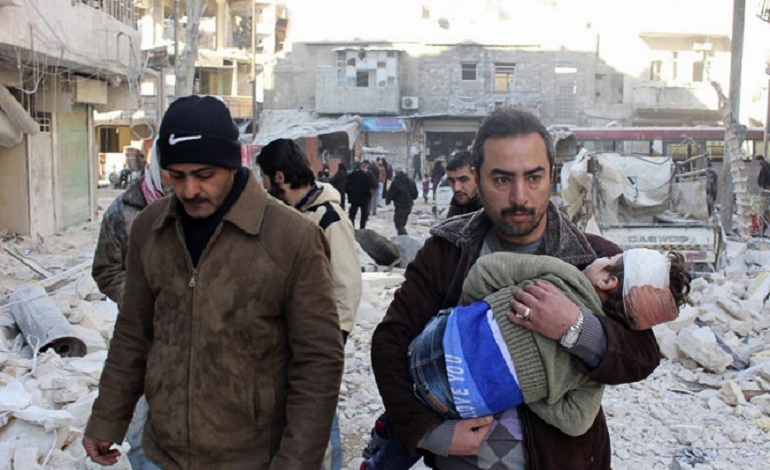 Monday 20 March was the UN “International Day of Happiness”. But the World Happiness Report 2017 doesn’t make for pleasant reading. Especially as most of the nations in the bottom ten have been subject to perpetual Western intervention.

As The Canary previously reported, the world’s happiest countries are places like Norway, Denmark, Iceland, Switzerland and Finland. But the bottom of the list reads like a post-colonial ‘who’s who’ of failed Western interference: 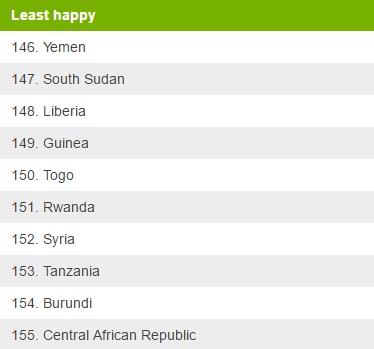 Below are just four examples. Those of Yemen, South Sudan, Syria, and the Central African Republic.

The Yemeni conflict between Saudi-led (and Western-backed) forces and Houthi rebels has raged since March 2015.

Western financial ties with Saudi Arabia play a big role in the West’s ongoing support for this war. Like the £7bn of goods and services the kingdom bought from the UK in 2014; the 6,000 businesses which rely on this trading relationship; or the £11bn worth of investment the UK government has in Saudi Arabia. Not forgetting King Salman’s multi-million-pound London property portfolio, of course.

But geopolitical forces are also at play. Like the Bab al-Mandab Strait – one of the most important oil waterways in the Middle East. And the protection of Saudi Arabia’s oil fields; which lay in the east of the kingdom but are in Shia-populated areas. Yemen’s Shia Houthi rebels have reportedly been making in-roads into Saudi Arabia. And if this caused a Shia uprising in the east, it could threaten the kingdom’s very existence.

The conflict in Yemen has caused the deaths of over 10,000 children. And it has left over 21 million people in need of humanitarian aid.

South Sudan broke away from Sudan in 2011. And a civil war between its government and rebel forces has raged since 2014. But as The Atlantic has reported, the US had been interfering in Sudan for over two decades:

[A] bipartisan coalition, known in recent years as the Sudan Caucus, has pushed three successive U.S. presidents to make Sudan a foreign policy priority. ‘It’s a great day,’ co-founder of the Sudan Caucus, Democratic Congressman Donald Payne, told me. ‘A victory for the oppressed’.

But the real reasons for US interest in South Sudan are the same as with most interventions. The majority of Sudan’s oil reserves were in what is now South Sudan. And the two separated countries are now host to a geopolitical game of chess between the US and China. The US has been pushing oil giants like Exxon to invest in South Sudan. And China is one of the biggest recipients of Sudanese exports.

But as many point out, South Sudan has become little more than a failed state; hence its low ranking on the UN World Happiness Report. The UN says that at least 50,000 people have died since 2014; and that three million people have been displaced.

Syrian cities were once among the most prized in the Middle East. But the country is now one of the most war-ravaged on the planet. It encapsulates the failure of corporate-driven Western policies and interventions. It is also an arena for both international and regional geopolitical games. As I wrote in 2015:

We are witnessing the first “World War” of the 21st century. But one that is executed by proxy. Every nation is… trying to gain control of the last Middle East outpost as yet untouched by globalised multinationalism: Russia, seeking to secure the same gas supply and commodities as the EU. The US, desperately wanting regime change so it can plunge its claws into the one blank corporate canvas left in the Middle East. The Sunni Gulf regimes, frantically suppressing any Shia uprising for fear of losing their archaic, totalitarian grip on their kingdoms. And Turkey, under the increasingly despotic Erdogan, attempting to play everyone off against each other.

Since the conflict began in 2011, over 450,000 people have died and more than six million have been displaced.

In CAR, a Muslim minority rebel group staged a coup in 2013. But since then, the majority Christian population and militia have been acting with impunity. So much so that the UN has accused them of “ethnic cleansing”. Campaign group ‘Enough’ says:

CAR is part of a regional conflict system in which the country is destabilized because of the involvement of neighboring and international actors pursuing political and economic objectives. Multiple external actors have been motivated to intervene because of CAR’s natural resources, which include diamonds, timber, uranium, and potential oil and gas deposits.

Since CAR gained independence from France in 1960, it has never been stable. And French neocolonial interests have never ceased. The best example of this was Operation Sangaris, which began in 2013 and ended last October. As a paper by Eva Nelson for the London School of Economics said:

In an attempt to be first in line for future trade, or maybe just to affirm itself as a dominant power, French officials are constantly in and out of Africa with brain and brawn.

And as campaign group Global Witness discovered, EU companies have been trading illegally with rebels to continue logging. Meanwhile, more than 5,000 civilians have died since the conflict began.

As Naomi Klein wrote in her book The Shock Doctrine, corporations feeds off disasters. Where there’s chaos, there’s money to be made:

The falling bombs, the bursts of terror, the pounding winds serve to soften up whole societies much as the blaring music and blows in the torture cells soften up prisoners. Like the terrorised prisoner who gives up the names of his comrades and renounces his faith, shocked societies often give up things they would otherwise fiercely protect.

The World Happiness Report 2017 manages to highlight the never-ending chaos and suffering that comes with failed Western intervention. And the reason is generally because such interference is driven by one thing: money. So while Western nations enjoy the fruits of past colonial plunder and modern neoliberal policies, people in far-off, forgotten lands continue to suffer the consequences of those greed-driven Western exploits.