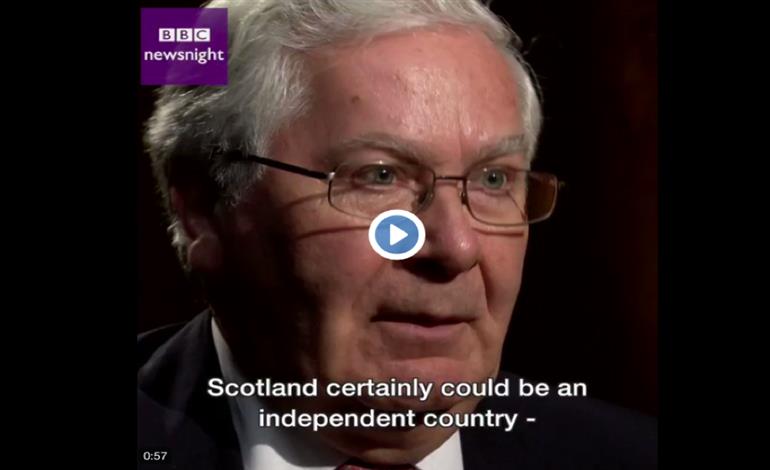 Former Bank of England governor Mervyn King has contradicted the central claim of the UK government on Scottish independence. The surprise intervention will come as a major blow to the campaign to keep Scotland in the United Kingdom.

‘Project Fear’ vs the Bank of England

In 2014, Scotland voted narrowly to remain in the UK, with 45% voting ‘Yes’ (to leaving). But even The Telegraph admitted that ‘Project Fear’ [paywall] won the referendum. This refers to the strategy deployed by the media and political class opposed to independence. Namely, to blast voters with scaremongering stories until they voted ‘No’.

Two of the deciding factors in the referendum were Scotland’s place in the EU, and keeping the sterling currency. At the height of the campaign, then-Chancellor George Osborne told Scottish voters that they risked losing the pound if they left the union. Also, EU Commission President José Manuel Barroso claimed it would be “extremely difficult” for an independent Scotland to gain membership to the EU. These are both demonstrably false.

During an interview with BBC Newsnight, former Bank of England governor Mervyn King confirmed this, stating:

The question is, does it want to be, given the consequences of it?

Now, I myself don’t think there are any major problems in terms of currency – that was the thing that ‘Project Fear’ focused on last time.

What were the potential consequences Scotland would need to prepare for? King argues that the newly independent nation would need to focus on issues of borrowing, budget deficit, and interest rates. But that none of these are an impediment to independence.

Following the Brexit vote, support for Scottish independence has reached its highest ever levels. This has triggered a second referendum, during which Project Fear will likely be deployed again. But memories may be fresh enough to weaken its impact this time round.

Whether you’re for or against Scottish independence, there is one thing we should all agree on. And that’s that voters should not be scared into voting against their preference by propaganda. Already, Project Fear is going after potential independence voters.

On 13 March, the BBC‘s Laura Kuenssberg tweeted that “sources” had confirmed Scottish First Minister Nicola Sturgeon would ask Scotland to “vote blind” on independence. This means they would have to vote without knowing the terms of the UK’s Brexit deal. The tweet became a popular story in the Westminster media. And it echoed the allegations of Conservative Prime Minister Theresa May.

It was also entirely false. Sturgeon has already confirmed the referendum would take place in 2018 or 2019, saying:

the vote must take place within a time frame to allow an informed choice to be made – when the terms of Brexit are clear but before the UK leaves the European Union, or shortly afterwards.

It later emerged that Kuenssberg was sharing the view of a single, anonymous source. Also known as gossip. 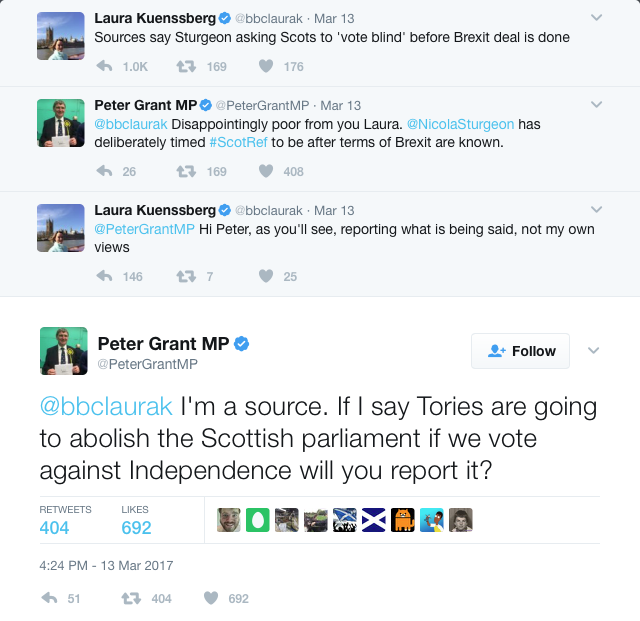 The Prime Minister (PM) also got in on the act. She laid out her argument against Scotland holding an independence referendum in a column for The Times [paywall]. But it seemed familiar somehow:

As readers pointed out, May appeared to have confused the proposed Scottish independence referendum with the Brexit vote enacted by her own government.

The argument from Downing Street claims the choice Scotland faces is the union or death. This isn’t true. As King states, Scotland can survive, and thrive, as an independent country. The question for Scotland is whether its people want to. Each voter should make that choice freely, based on the best and most accurate information available. And not the scare stories of a terrified Westminster establishment.