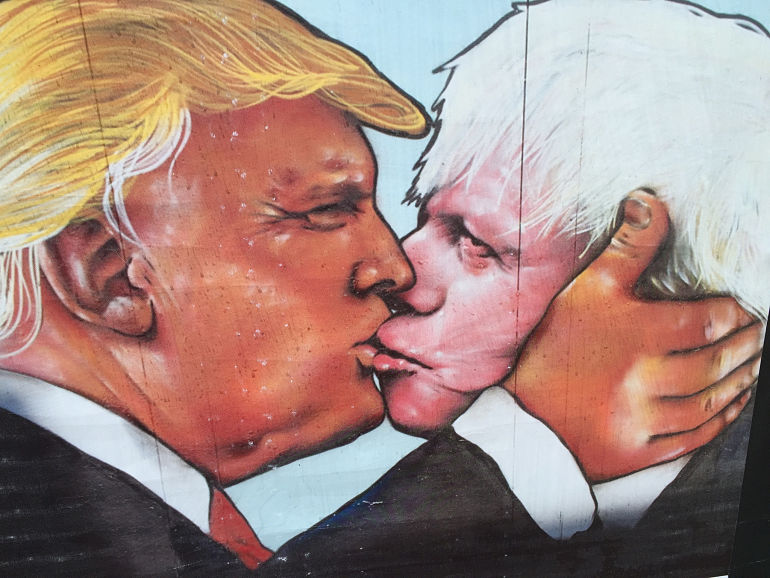 The ongoing investigation into US President Donald Trump’s links with Russia has highlighted collateral evidence. And this suggests that the Brexit vote in Britain’s EU referendum could have been rigged.

As the investigation into Trump’s links with Russia accelerates, a former US ambassador to Russia predicts the scandal will become America’s next Watergate. Already, one former NSA analyst is warning this could be the end for Trump.

Earlier this year, US National Security adviser Michael Flynn resigned after it came to light that he hadn’t revealed his communications with the Russian ambassador. But that was only one element of his dealings with Russia. Flynn allegedly received money from the Kremlin for speaking at a Russia Today gala in Moscow, where he sat next to Vladimir Putin. Southern California Democratic representative Adam Schiff lists more pro-Putin payments to Flynn. Some of the receipts for Flynn’s services to Russia are here.

Flynn also received $11,250 from Russian internet security company Kaspersky. As The Canary has reported, Russian authorities arrested Kaspersky’s senior anti-virus investigator in the fall-out from the publication of the Steele dossier (see below). Others detained included [Russian] Sergei Mikhailov, the most senior cybersecurity officer in Russia’s Federal Security Bureau (FSB). As well as Dmitry Dokuchaev (FSB) and Ruslan Stoyanov [LinkedIn].

The Canary also reported on the dossier by former MI6 spook Christopher Steele. Significantly, this alleges [page 30] that Moscow-based investment banker and Trump adviser Carter Page was offered brokerage of a 19% stake in oil giant Rosneft. This was allegedly in return for the Trump Administration lifting sanctions against Russia. It was only a few months after Steele delivered his briefings to the FBI that Rosneft CEO (and former KGB chief) Oleg Erovinkin was found dead in suspicious circumstances.

A Democratic Coalition report revealed that the Trump Organization has as many as 250 businesses registered in Russia. And several members of Trump’s campaign, including Paul Manafort, had been in touch with Russian intelligence officers. Also, Attorney General Jeff Sessions (who was foreign policy adviser to Trump) met twice with Russian Ambassador Sergey Kislyak in 2016. Courtesy of freelance researcher Grant Sternis, here is an infographic that explains some of these links: 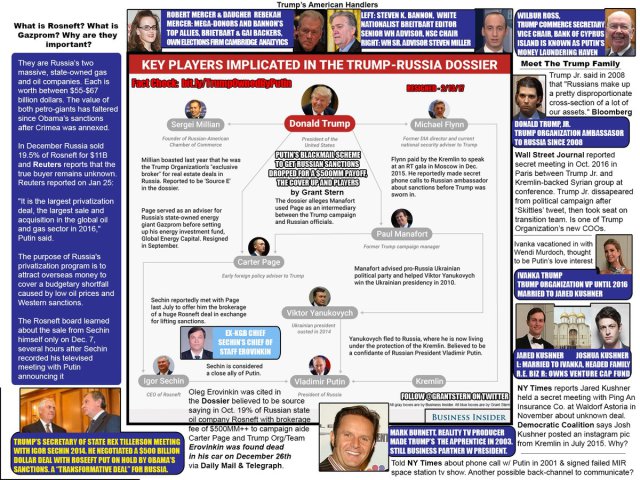 The Canary previously published details of alleged links between Leave.eu and Cambridge Analytica. Subsequently, the Information Commissioner’s Office began an investigation into Leave.eu for possible misuse of data.

The Electoral Commission is also investigating alleged undeclared spending by Vote Leave. This was the campaign backed by Tory MPs Boris Johnson and Michael Gove. In the final stage of the EU Referendum campaign, Vote Leave gave £625,000 to BeLeave, a pop-up Brexit group set up by 23-year-old Darren Grimes. BeLeave then used that money to pay for the services of a Canadian company, AggregateIQ.

Vote Leave allegedly paid a total of £3.5m to AggregateIQ; which was formerly linked to CA’s Canadian division.

But this is not just about alleged overspends.

Cambridge Analytica specialises in “behavioral change” technologies. Such as Artificial Intelligence and psychometrics to design emotional triggers that target social media users. SCL offers a similar range of services. These include “behavioural microtargeting“. This is defined as “advanced data analytics, to identify groups of voters who share demographics, political beliefs and lifestyle, and use this insight to create unique messages designed to resonate with them”. Indeed, SCL has more than 20 years experience shaping voter perceptions via target audience analysis.

Interestingly, SCL is under contract to the US Department of Homeland Security to develop an ‘anti-radicalization’ programme, similar to Britain’s ‘Prevent’.

Nor are the Trump investigations just about his business and political links with Russia.

According to Emma Briant from the University of Sheffield:

[SCL] are using similar methodologies to those the intelligence agencies use with openly available data in order to create a commercial advantage for themselves. They are exploiting our dependence on social media.

The technologies used to manipulate voters in the US elections were allegedly the driving force behind the Leave.eu campaign. And no doubt Vote Leave too.

If these claims prove correct, Brexit does not mean Brexit, but sabotage on a massive scale. And not just by fringe politicians from UKIP. But by a far-right Tory ascendancy.

– Read more about investigations into the Brexit campaigns.