I went behind-the-scenes at a pro-EU march. But was everyone united? [VIDEO] - Canary 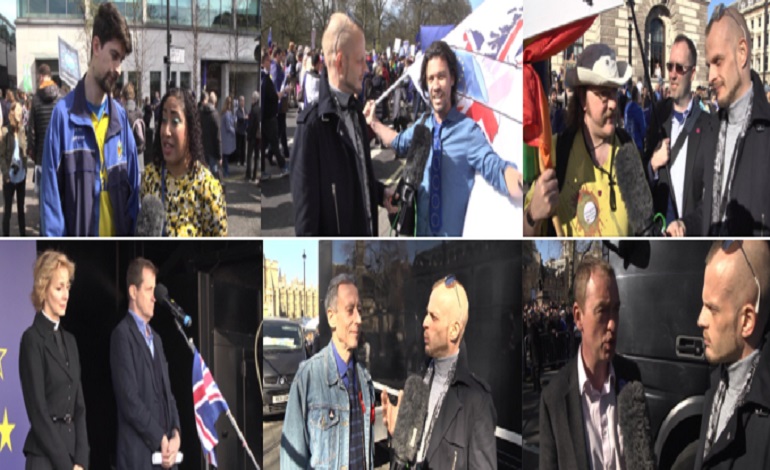 On Saturday 25 March, thousands of people lined the streets of London, marching over Brexit. Not everyone was pro-EU. But the overwhelming majority were there to show one thing: that they were ‘United for Europe’. And I went behind the scenes, to talk to politicians, campaigners and members of the public about why they are fighting for the EU.

Amid the chaos of Brexit…

Unite for Europe organised the march. Around 100,000 people turned out to make their voices heard; far greater than original estimates. It started on Park Lane, and finished with a rally opposite the Houses of Parliament. And I was there, filming the event as it unfolded: 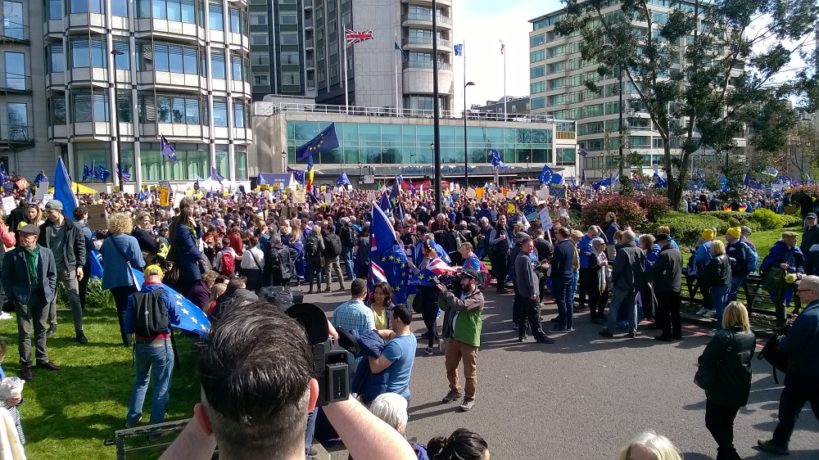 At parliament, people were lining up, overlooked by Big Ben, to listen to the assembled speakers: 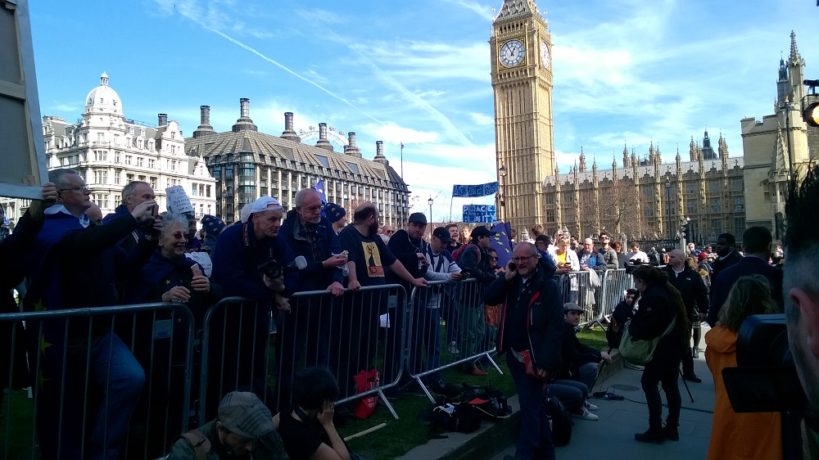 Green Party co-leader Jonathan Bartley spoke passionately about his views on Brexit in the film; and argued that the Conservatives’ version of it is bad news:

Theresa May has no mandate to do this. She only got the job because everyone else ran away… The Tory Party were elected with 24% of those eligible to vote. That’s not a mandate… No one voted for this. No one voted for that Hobson’s Choice between an extreme Brexit and no deal at all… She’s gone cap-in-hand now to Donald Trump and she’s desperate for a trade deal. And we know what Trump’s going to offer… TTIP on steroids which is going to open up the NHS to privatisation… And I think the penny’s dropped for many people how bad this is… These are huge decisions… that are being made behind closed doors.

But not everyone there was pro-EU. I spoke to Tommy Robinson, founder of the English Defence League (EDL), although I chose not to include his interview in the video. He said:

What I believe is… the majority of people voted to leave. That’s what the country has to stand by. But I’ve spoken to a lot of people who said ‘we should ignore the 52%’. Which is fascism. I think a lot of people voted [Remain] for finance and money… And everyone else, who comes from the background like I come from… they just thought our culture and our identity is important. And we feel like we’re losing it… But at the same time… I understand why people… wanted to stay. They’ve got legitimate reasons… Both sides bullshitted. Both sides lied.

I was staggered to hear someone like Robinson, the former leader of an openly racist and xenophobic sham of a movement, using the word fascism. Without a hint of irony.

I previously wrote for CommonSpace about the flawed nature of the EU referendum; that, essentially, we were stuck between a rock and a hard place. So for me, there were several underlying challenges at the heart of the Unite for Europe march. How do the people against Theresa May’s Brexit convince the public of their argument? Is it right that a democratic process, albeit a flawed one, should be potentially usurped by a group of people who don’t agree with it? And wouldn’t we, ultimately, be better off outside the EU in the long run, anyway?

While people like Tommy Robinson’s views on Brexit are based on a flawed racist and xenophobic mantra, many realise the EU is in no way perfect. But to push to counter Brexit will deeply divide the country. And we need to remember that division is what the likes of the Tories feed off.

Maybe it’s time to accept we’re leaving the EU, and start to build towards a left-wing future outside of it. But try and make sure it’s one where the Tories don’t even get a look in.

The Canary meets… presented by Steve Topple; created by Merlin Norbury; music via