While the UK suffers the aftermath of their rivalry, Boris and Dave laugh it up at a Bullingdon Club 'reunion' [IMAGES] - Canary 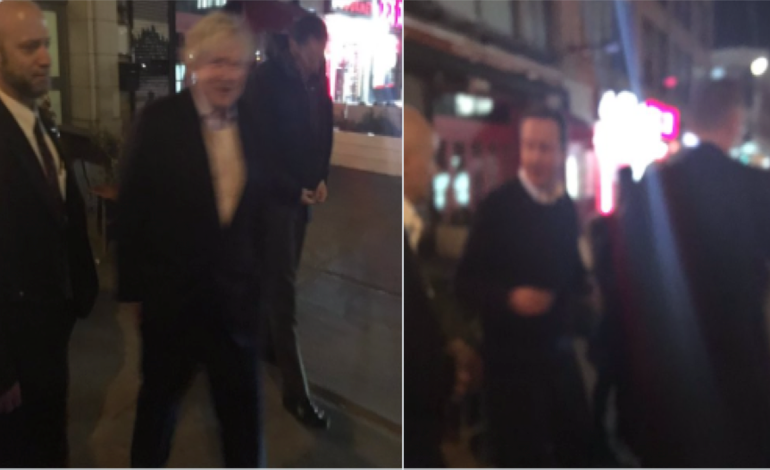 Their rivalry led to the EU referendum which resulted in Britain choosing to leave the EU, and may trigger the break-up of the United Kingdom. But while ordinary people live with the consequences, Boris Johnson and David Cameron held their own Bullingdon Club reunion. The pair were snapped laughing it up over dinner in Harlem, New York.

Boris Johnson and David Cameron were both members of the Bullingdon Club while studying at Oxford University. The drinking society for entitled menfolk is infamous for smashing up restaurants and having their wealthy parents foot the bill. Members have also reportedly burned £50 notes in front of homeless people in Oxford, for kicks.

Flash forward a few decades, and the pair have exchanged Oxford for Harlem. They enjoyed a raucous dinner at the Red Rooster just days ago.

Boris @BorisJohnson and @David_Cameron dine together and stand on chairs … pic.twitter.com/2bowiUCG3X

Twitter staffer Joanna Geary bumped into the pair and decided to live-tweet the encounter.

Boris and David dining together in Harlem: pic.twitter.com/u48tsmBZ1b

I said "hello Boris!" And he said hello back, shook my hand and asked me why I was there. "I live here now, I moved in November", I replied.

The House of Cards-style shenanigans of Boris and Dave have left chaos in their wake, but the pair seem unperturbed. The UK is left with an authoritarian Prime Minister that nobody voted in, a one-way ticket out of the EU, a fractured relationship between England, Northern Ireland and Scotland, and a devastated welfare system and NHS. Meanwhile, the architects of this disaster clink glasses and make merry.

Decades on, these two Bullingdon boys haven’t changed. Boris and Dave have trashed the place, and left the others to clean up the mess.