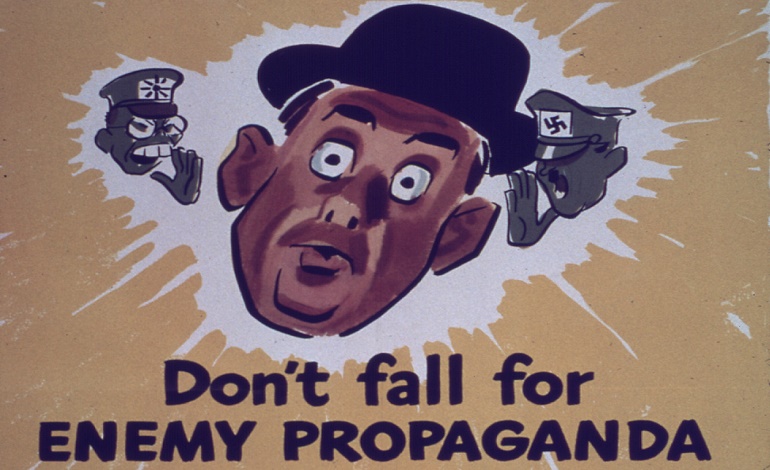 The UK government is investing £14m in apparently anti-Russian propaganda in countries that are former members of the USSR. Yet one report [pdf] by Tory MP Michael Gove’s thinktank has said that Russia is trying to “manipulate international narratives”. Without a hint of irony.

As PRWeek reported, the Foreign and Commonwealth Office (FCO) is spending £14m on “supporting public service and independent media operating in the Russian language, including projects in the Baltic States, Ukraine, Moldova, and Georgia”. It said that:

the FCO is working with the EU and the international community to restrict the Kremlin’s ability to use disinformation and propaganda, as it has done during its occupation of Crimea and destabilisation of Ukraine.

But in March, the Foreign Policy Centre thinktank released a report [pdf] called The information battle: How governments in the former Soviet Union promote their agendas and attack their opponents abroad. The report’s executive summary said [pdf p4]:

It claimed [pdf p6] that Russia is seeking to:

proactively change the international ideological and political environment through its use of broadcast media, both through an overt and covert online presence and through its support of organisations and institutions in Europe and beyond that share their values. It seeks to build on and subvert the style of Western values promotion practiced both during the Cold War and its aftermath, but instead of promoting liberal democracy Russia prioritises supporting ‘traditional values’ and ‘state sovereignty’ across the globe. [Its] goal is also to discredit Western behaviour and models of political organisation… and [muddy] the waters of global discourse through saturating the debate on particular issues with a high volume of ‘alternative facts’.

But the Foreign Policy Centre managed to ignore the West’s equivalent actions.

Take the news that the UK government’s Department for Work and Pensions (DWP) was found to be manipulating the media. A report by Disability News Service (DNS) revealed how the DWP press office worked well to quash any negative media about it. For instance, in one month of 2014 alone, DWP press officers managed to kill 44 stories. The department also quashed interest in a Work and Pensions Committee report on benefit claimant deaths. It successfully “dampened interest” in the report, which received far less coverage than other negative reports.

DNS also spoke about how the DWP press office had bragged about securing a “favourable article” from the “typically unsupportive” Guardian. This in spite of rising unemployment figures.

But it’s not just the UK government that manipulates the media for its domestic agenda.

As Piers Robinson wrote for The Guardian:

There are ample grounds to challenge the understanding that the ‘strategic communication’ activities of our governments can be understood as free from the kind of manipulative ‘propaganda’ of which the Russian government is accused… This was recently observed quite clearly during the run-up to the Iraq war when intelligence was manipulated in order to mobilise public support for the Iraq invasion.

Moreover, the recent Chilcot report describes how, in the early days after 9/11 ‘regime-change hawks’ in Washington argued that ‘a coalition put together for one purpose (against international terrorism) could be used to clear up other problems in the region’. Tony Blair had discussed how… the ‘war on terror’ would require a ‘dedicated tightly knit propaganda unit‘.

The Foreign Policy Centre also says [pdf p4] that Russia is trying to push its “worldview” via media outlets like Russia Today (RT) and Sputnik. But Western media outlets are also making every effort to broadcast their worldview to the four corners of the earth. Including North Korea.

There are few better examples of Western media pushing the boundaries of its reach than the BBC. In November 2016, the UK public service broadcaster announced that it was launching radio services in North Korea. According to BBC Director General Tony Hall, the secretive state would receive “independent, impartial journalism and world-class entertainment”.

But the money for the BBC expansion into North Korea didn’t come from the public who pay to watch it via the UK TV licence. It came from direct funding from the UK government itself; which gave the broadcaster an additional £289m after a BBC report warned that:

If the UK wants the BBC to remain valued and respected, an ambassador of Britain’s values and an agent of soft power in the world, then the BBC is going to have to commit to growing the World Service and the government will have to recognise this.

It seems that the BBC threat of losing its reach as an “agent of soft power” (something the Foreign Policy Centre noted (pdf p11) that Russia did with the 2014 Sochi Winter Olympics) rattled the UK government enough to make it act.

The Foreign Policy Centre report [pdf p6] makes reference to allegations that the Russian government “directed hacking and… [used] social media to influence political debate” in the 2016 US election. But as University of California professor Dr Marc Trachtenberg noted:

Since 1945, America has intervened in the internal political affairs of other countries as a matter of course. Our basic attitude has been that free elections are great — as long as they don’t produce outcomes the U.S. government doesn’t like. Many of these episodes — Indochina, Congo, Chile, the Dominican Republic — are quite well-known. Other cases — like Guyana, where the Kennedy administration put heavy pressure on the British to prevent Cheddi Jagan from coming to power through the democratic process — are less familiar. The practice was more common during the Cold War than people realize.

So is Russia not just playing a game the West has played for many decades? Indeed, to understand what Russia is doing in Syria today, we need to turn the clock back a quarter of a century.

As Naomi Klein documents in The Shock Doctrine, the collapse of the USSR, the rise of Boris Yeltsin, his fall from grace, and the installation of Vladimir Putin were all instigated by Western powers and bankers. It’s what Klein calls “disaster capitalism”. Where there’s chaos, there’s money to be made. And banks like Goldman Sachs were instrumental in bringing free market capitalism to post-Soviet Russia.

Russia has since grown as a corporatist power seeking to extend its influence abroad. And its interests in Syria are mostly about money. In February 2016, Russia’s Ambassador to Syria said of the war:

I use this opportunity to urge Russian businesses to take more active steps. This is the best time to launch operations in Syria.

And indeed, countless Russian companies and oligarchs are already in talks with the Assad government over post-war infrastructure projects. Some even have direct links with Putin. But ultimately, Russia’s behaviour in Syria is an almost carbon copy of the West’s in countries like Iraq and Afghanistan. As is its propaganda war, mimicking the same actions the West engages in.

There is no doubt that Russia’s manipulation of the media to further its own ends is a threat to democracy. But is it really any worse than the West’s manipulation?

Criticism of the West doesn’t equate to support for Putin’s Russia. And criticism of Russia isn’t the same as support for the West. Those engaging in such a ‘black and white’ analysis are really missing the point. It’s not a global battle between ‘good guys’ and ‘bad guys’; just corporatist governments serving the interests of the world’s richest people. While the rest of us suffer.

While the UK Conservative government, and its extended arms in thinktanks like the Foreign Policy Centre, may deem Russia a threat to the ‘Western’ way of doing things, it has no more interest in the betterment of humanity than Putin. It just dresses its faux-concern for its population up a bit better than the Russian leader does.

We are, as the Foreign Policy Centre states, in a “battle” of propaganda. But the only winners in this war are the world’s richest and most powerful people. The losers, meanwhile, are the other 99% or so; stuck at the bottom of the global corporatist hierarchy.