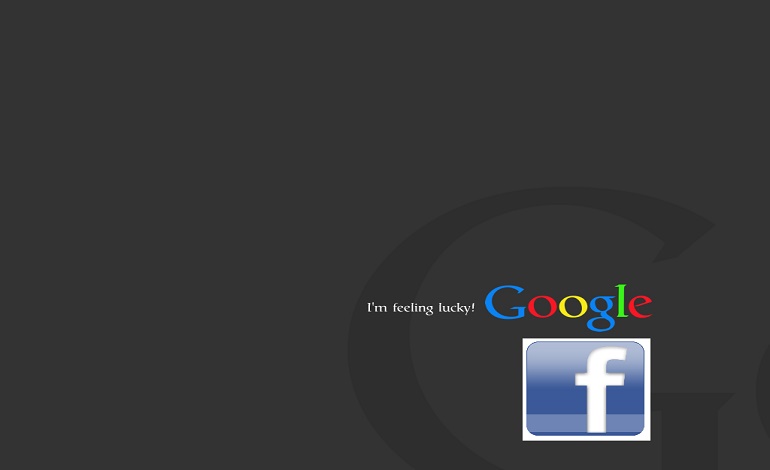 A media organisation is fighting back against what it calls Google and Facebook’s attempts to “destroy UK journalism”. And its campaign, launched on 10 April, aims to get a “fairer deal” for journalists from the two corporate giants.

Without fear or favour

Press Gazette is a UK media trade magazine. Launched in 1965, it is an impartial voice in the media, reporting (as it describes) without “fear or favour”. But The Gazette is concerned by the effect that Google and Facebook are having on the UK media industry. So it has launched its “Duopoly” campaign.

The Canary spoke to Press Gazette’s Editor, Dominic Ponsford, about the campaign. And the shape the UK media is in, more broadly.

There is a growing concern among the UK press that Google and Facebook are consuming more and more advertising revenue, shrinking the amount that publishers get. And a report by OC&C Strategy Consultants indicates the problem is only going to get worse. It says that currently, the two companies receive around 53% of the UK’s annual £4bn online advertising market. But OC&C is projecting that this will increase to more than 70% by 2020.

And Ponsford said that concern about this is growing throughout the media industry:

It is clear that everyone from News Corp to The Guardian are deeply concerned about the growing dominance of Google and Facebook. And in my experience when those two publishers agree on something it is a good sign. Because it is one of the few issues which unites the journalism industry… Something has to happen. Either Facebook and Google share more of their ill-gotten gains with publishers out of enlightened self interest, or publishers somehow unite to demand a better deal. Or the government steps in with a regulatory solution.

This is where the Duopoly campaign comes in. Over the coming months, Press Gazette will be investigating the impact of Google and Facebook on the journalism industry and provide a forum for debate. It says it intends to tackle the issue head on, by running campaigns and investigations around the following issues:

A fair deal for news publishers:

Google and Facebook need to adopt a formula where a fair proportion of the advertising income they make from journalism is returned to publishers.

Automated online advertising is largely controlled by Google… As little as 30% of the money spent by brands on programmatic advertising finds its way to publishers… Google needs to look at ways to enable news publishers… to get a fairer deal from the ad networks.

The Government needs to look at creating a level playing field for all media companies, so that Google, Facebook and other platforms face the same legal responsibilities as news publishers.

Given Google and Facebook’s dominance of the internet advertising market it is difficult to see how they can escape a full Government investigation into their duopoly status in the market.

What the OC&C report also highlighted is the way the media landscape is changing. It projects that this year in the UK, time spent looking at content on a mobile will surpass that watched on TV for the first time. So, it says each person will use their mobile for content for around 3.2 hours each day, compared to 3.1 hours on TV. And OC&C projections are broadly in line with Ofcom’s current analysis. The industry watchdog’s latest survey of UK digital media habits revealed (pdf p.51) that 38% of people would now miss their mobile phone, compared to 30% saying their TV. 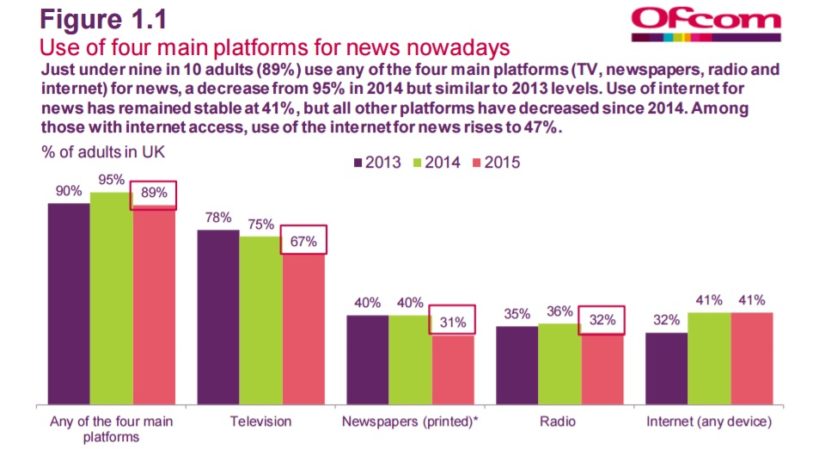 And BBC One, ITV, Sky, The Sun and The Daily Mail have all declined as news sources. But Facebook has seen a 5% rise: 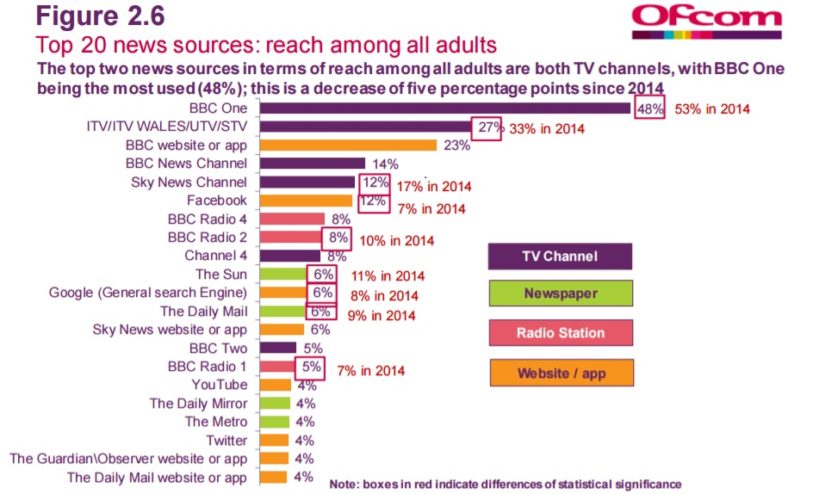 So the challenge facing the media industry is that more and more people will be accessing news via the internet. And therefore the current duopoly of Google and Facebook will be taking more and more advertising revenue.

Ponsford recognises this. But he admits that in five year’s time “online advertising will be the vast majority” of where revenue comes from. And he also notes that Google and Facebook’s duopoly “won’t leave much room for anyone else”. Hence why Press Gazette is taking action now:

The current era of abundant, free and largely high quality news may come to an end. There could be just the BBC, some closed subscription sites and news sites that are funded by someone with an axe to grind or an angle to promote. What a tragedy that would be. It would be far better for Facebook and Google to act now to ensure that popular news websites can exist online for free. It seems to me that taking action to make that happen would be good for democracy, good for plurality and good for the entire digital media ecosystem that those two giants exist in.

And he also believes Press Gazette is in a unique position to act:

Were a publisher to launch a campaign like this it would be seen as self-serving. Press Gazette takes a more independent view. We have been strongly critical of the industry we serve at times. But it seems to me the industry has a genuine gripe here.

The other major challenge with Google and Facebook is their unaccountability regarding ‘fake news’ and extremist content. And as research from Buzzfeed showed, the former is a major challenge. It’s analysis found that during the final three months of the US election campaign:

And during these last three months, engagement levels with fake content on Facebook out performed that of ‘real’ media. Facebook CEO Mark Zuckerberg said of the ‘fake news’ phenomenon during the US presidential election:

…we don’t want any hoaxes on Facebook. Our goal is to show people the content they will find most meaningful, and people want accurate news. We have already launched work enabling our community to flag hoaxes and fake news, and there is more we can do here. We have made progress, and we will continue to work on this to improve further.

But Zuckerberg doesn’t convince Ponsford. And he is unsure if the duopoly even take the problem of ‘fake news’ and extremist content seriously:

They are so opaque that who knows? But their whole argument is that they are platforms, rather than publishers. So their interest is in doing as little as possible… In my view… they should be subject to the same legal and ethical constraints as everyone else who publishes content. If your house is burned down by an Airbnb guest, you would expect some redress. So at some point we have to draw a line and say that the platforms have to take some responsibility.

The issue of Google and Facebook’s duopoly is a serious one. But at the same time, so is the state of the UK press. Public trust in the media has fallen by its sharpest ever levels, from 36% in 2016 to 26% this year. And only 25% of Britons think journalists tell the truth. Yet seemingly people still want news content, as advertising revenue continues to grow. So, if the public wish to have a free and fearless press, something needs to change.

Ponsford believes the government is unlikely to act; if anything, he says, Brexit will mean it is “more likely to be keen to persuade them to base their regional global operations here”. Also, he sadly believes voters aren’t interested in the issue of media publishing. So it’s down to the industry itself to act. But with Press Gazette leading the way, the tide on the duopoly’s control of the media may be about to turn.