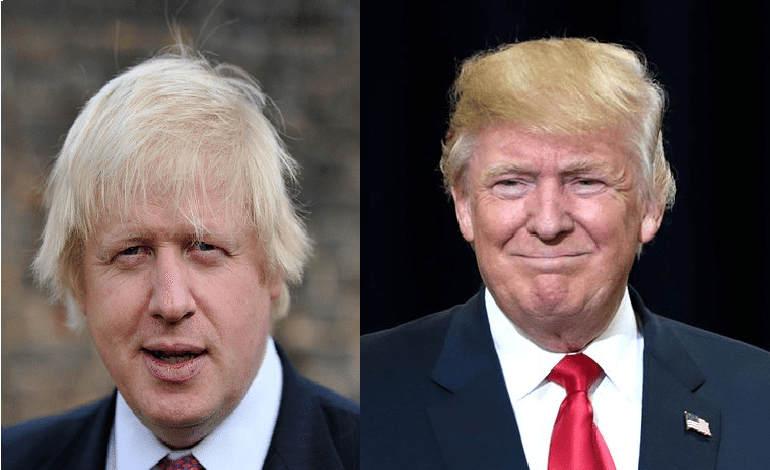 Foreign Secretary Boris Johnson has made a statement to the Commons that essentially turns a Tory vote in the upcoming general election into a vote for Donald Trump.

Johnson reiterated that Trump’s stance on Syria and North Korea has “the full support of the British government”. And in backing the US President yet again, the pattern continues. Conservative foreign policy apparently changes according to what Trump happens to think on any given day.

A vote for Trump

The Conservative government’s position on Syria moves in accordance with America’s. The former Mayor of London displays this through his quadruple flip-flop. Before becoming Foreign Secretary, Johnson spoke against regime change in Syria. In December 2015, he wrote in The Telegraph:

Let’s deal with the Devil: we should work with Vladimir Putin and Bashar al-Assad in Syria… we cannot afford to be picky about our allies

This all changed right after he joined Theresa May’s cabinet. In July 2016, his position flipped:

I will be making clear my view that the suffering of the Syrian people will not end while Assad remains in power. The international community, including Russia, must be united on this.

His position was now in line with America’s under Barack Obama. The longstanding US stance was to remove Assad from power. Then came the election of Trump, and everything changed.

Trump’s position was to focus on defeating Daesh (Isis/Isil) and stop pushing for regime change. Correspondingly, the Conservative government flip-flopped again. In January 2017, The Independent reported:

President Bashar al-Assad should be allowed to stand for election to remain in power in Syria, Boris Johnson has said in a significant shift of the Government’s position.

I see downsides and I see risks in us going in, doing a complete flip flop, supporting the Russians, Assad. But I must also be realistic about the way the landscape has changed and it may be that we will have to think afresh about how to handle this.

As Media Lens points out, the ‘changing landscape’ mentioned here is a new Trump Presidency, and the resulting foreign policy shift. So, again, the Conservative position depends entirely on America’s, which is now at the mercy of Trump’s inclinations.

The problem is that Trump’s inclinations change rapidly. The man made four major U-turns in one 75-minute interview after his election, for example. And his policies seem to change depending on what politically benefits him at the time.

So it’s no big surprise that, in April 2017, Trump U-turned on Syria. The US claims Assad carried out a chemical attack on his citizens on 4 April. But as the UN special envoy for Syria says, “we have not yet any official or reliable confirmation” of who was responsible. Nonetheless, Trump launched 59 tomahawk missiles against Assad’s government in Syria.

By now, we can guess what happens next. The Conservative government’s position changed dramatically, corresponding with Trump’s. Johnson’s latest statement sums that up:

Writing in The Telegraph, Johnson recently branded Assad an “arch terrorist”. But he failed to get the backing of G7 countries for new sanctions against Russia over its support for Assad. Unlike the UK Conservatives, these other countries do not change their position according to Trump.

Under the Conservatives, our transition to Trump’s poodle has been visceral. As leaders of the EU and the world joined in condemnation of President Trump’s dangerous policies, the UK Prime Minister was quite literally holding his hand.

Featured image via Wikimedia 1 and 2