Theresa May slammed for "security failures", but that's only half the story [VIDEO] - The Canary 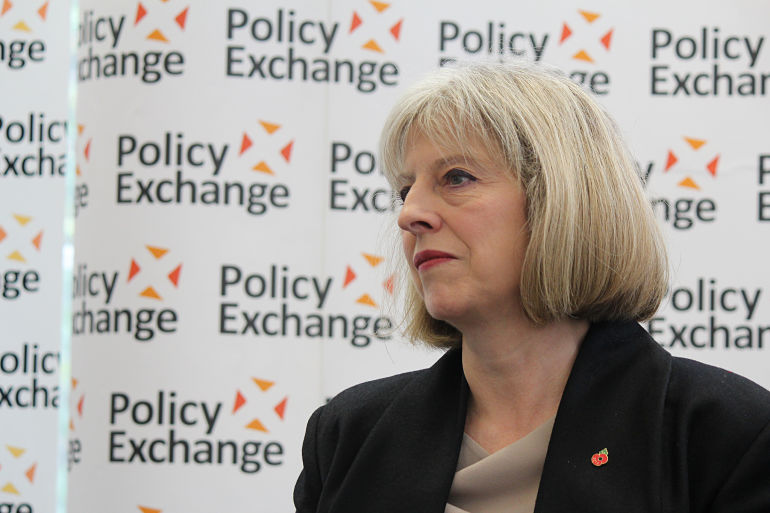 A former Conservative director of strategy has accused Theresa May of being responsible for a series of “security failures”. Failures that apparently contributed to the recent spate of terrorist attacks. But that’s not the whole story. For there appears to be evidence that the Conservatives have actually ‘sponsored’ extremists for years.

Theresa May [is] responsible for security failures of London Bridge, Manchester, Westminster Bridge. Should be resigning not seeking re-election… who is in the end politically responsible/accountable? she was in charge last 7yrs…

But Hilton’s words are even more pertinent when we place them alongside evidence that The Canary reported on only days earlier.

Recent terrorist atrocities were not just about MI5 and police failings. In reality, there is insider and documentary proof that the Conservative government had been sponsoring Libyan militants since the 1990s. In a recent interview, former MI5 intelligence analyst Annie Machon referred (3:50 in) to how Libyan rebels had received ‘sanctuary’ from the British authorities as far back as the 1990s. She also spoke of how Britain had allowed members of the Manchester bomber’s family to return to Libya in 2011 to help overthrow Libya’s Muammar Gaddafi.

But Machon went one step further, to suggest that the Manchester bomber was actually “allowed” by the British authorities to “fly under the radar”:

The allegation above came only days after The Canary revealed a catalogue of failures by MI5 and the police under Theresa May’s watch.

On 2 June, The Canary published a top secret MI6 cable [pdf] from 1996. This showed [pdf] how all relevant government departments were apparently briefed on a plot to assassinate Gaddafi. On 3 June, Nafeez Ahmed and Mark Curtis published a comprehensive dossier on the background to Britain’s links with foreign- and UK-based extremists. And the dossier shows how the perpetrators of the aforementioned coup plot were members of the Libyan Islamic Fighting Group (LIFG).

The LIFG is the very same organisation with which the Manchester bomber’s family are reportedly affiliated.

In the wake of the Manchester bombing, journalist John Pilger said:

The “smoking gun” is that when Theresa May was Home Secretary, LIFG jihadists were allowed to travel unhindered across Europe and encouraged to engage in “battle”: first to remove Mu’ammar Gadaffi in Libya, then to join al-Qaida affiliated groups in Syria.

In the latest development, one of the three men responsible for the London Bridge attack had apparently been reported twice to anti-terrorism authorities, some two years back (under Theresa May’s watch).

Terrorists allowed to come and go

Also under May’s watch, MI5 reportedly conducted an ‘open door’ policy for the Manchester-based LIFG fighters. Indeed, one such fighter told Middle East Eye that MI5 returned their passports, and that counter-terrorism police at Heathrow Airport were told to let them board their flights:

Suddenly the control orders were lifted. I was allowed to go, no questions asked.

Is Britain safe under the Conservatives? Or more specifically, is it safe under May’s leadership? For under her watch as Home Secretary, and later as PM, it would appear that Britain may have essentially employed a form of state-sponsored terrorism. Couple this with the Tories’ recent refusal to publish a ‘sensitive’ report into the links between Saudi Arabia and terrorism, and the sale of billions of pounds’ worth of arms to the Saudis, and the picture becomes clearer and clearer.

Steve Hilton suggests that May should now resign. But days away from a general election, that’s unlikely. What’s more important now is for Britain to make its choice on 8 June – for more of the same failures, or for a significant change in strategy? A change that would see an end to disastrous foreign interventions, and an end to support for extremists abroad.

– If you believe Britain needs a significant change in foreign policy, vote on 8 June. And encourage others to do the same.