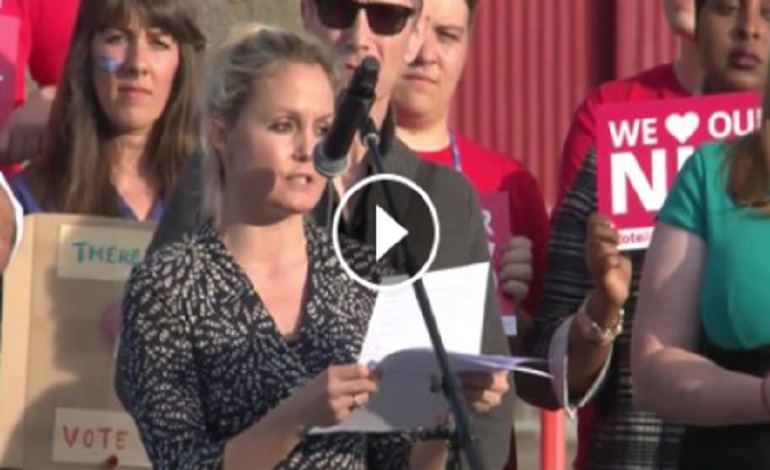 There is a video circulating on social media that every voter needs to see before the general election on 8 June. Because it is an honest account of just how much rests on the decision that we will all be making at the ballot box.

Dr Lauren Gavaghan is a front-line Consultant Psychiatrist. And at an NHS rally in Bristol on 31 May, she gave a heartfelt and moving speech about the NHS she knows and loves, and about why we all need to consider its future when we vote. Working in front-line mental health services, Gavaghan told the crowd in Bristol:

I have held the hand of the mother in A&E whose acutely psychotic and distressed daughter has had to be shipped half way across the country… just to get a bed… I’ve had to turn people away in their darkest moments because there are simply no beds across the entire country… not one. I have witnessed the devastating aftermath of these cuts to our National Health Service. I shall not detail them… though the images of those people – mothers, brothers, sons – shall remain with me; forever etched in my mind.

The cruelest of cuts?

The figures behind what Gavaghan speaks of make desperate reading:

Additionally, between 2010 and 2015, under the Conservative-led government, mental health trusts lost the equivalent of £598m from their budgets each year. And findings show that there are still £4.5m of mental health spending cuts across five areas of England to come.

Gavaghan is clear about what the solution to this crisis is. She told The Canary:

As the saying goes, a society will be judged on how it treats its most vulnerable members. I work as a doctor in the NHS, and witness the devastating effects when the most vulnerable are treated with disdain, and a total lack of respect, by those in power.

This election shall be a test of what sort of society we wish to be part of. This is an election that is as much about an ethical decision as it is about choosing a new government.

We can continue as we are, unthinking and unchecked, and allow those most vulnerable members to be sidelined, excluded and trodden on. Or we can make a conscious choice to say that we will no longer accept this. We can decide on 8 June to stand up to power and have our voices heard. To stand up for the voiceless in our society, the most vulnerable, and ensure that all are looked after and nurtured to become their best possible selves. Wouldn’t this be a better, more decent society to live in for all of us? Jeremy Corbyn gives me hope for this kind of future, for a society that truly cares for all. Vote wisely on 8 June. Vote Labour.

Whether you are a Labour supporter or not, most people must surely be in agreement that the NHS is in dire need of saving. Years of Conservative rule, and mismanagement, have left what many consider our most treasured national possession on the brink of collapse. So whatever way you are thinking of voting, make sure you get out and do it on 8 June. Because the general election is, as Gavaghan has said, “quite literally, about life and death”.