Thousands came out to see Corbyn yesterday. But you wouldn't know that from watching the BBC. [VIDEO] - The Canary 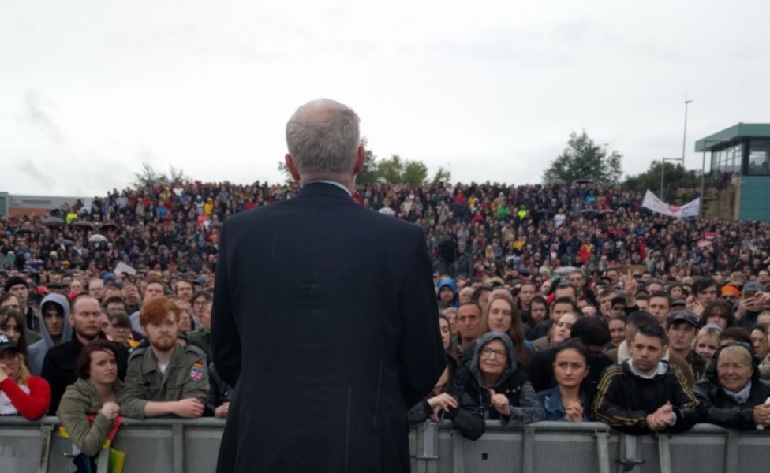 Thousands of people came out to see Jeremy Corbyn on Tyneside on 5 June. But you wouldn’t know that from watching the BBC.

Although there was a massive crowd in Gateshead to see Corbyn speak, the BBC was apparently too busy covering a visit from Theresa May to a few dozen supporters in Scotland to take notice.

10,000 turnout just now for Jeremy Corbyn in Gateshead. Few will ever know because the BBC did not report it. pic.twitter.com/XkVXQbPqsr

What do the BBC and Tories have in common?
Neither of them know where Gateshead is.

And as former Deputy Prime Minister John Prescott pointed out, this event was hardly insignificant:

This is a picture of Jeremy Corbyn addressing a crowd in Gateshead.
We never pulled crowds like this in 1997. #GE2017 pic.twitter.com/YsWPi7z7Lk

Elsewhere on 5 June, Theresa May was visiting Scotland. And an organiser reportedly had to remind the 70 or so supporters gathered in Edinburgh to cheer and clap to avoid it looking “like there is no one here”.

There was no need for such a reminder back in Gateshead:

But many people were thoroughly unimpressed with the BBC apparently prioritising coverage of May’s trip over Corbyn’s rally. One of these people was Shadow Education Secretary Angela Rayner, who said:

That’s been the story of the 2017 election campaign so far, though. The routine defence of the Tories by establishment media outlets has continued. And opposition politicians have had to fight hard to get their message out. But in spite of all the obstacles in their way, the message of hope and change has spread. And the massive crowds that Jeremy Corbyn has attracted throughout the country are testament to that.

The Labour leader made his message clear, insisting that Britain has suffered:

And while BBC Newcastle apparently had little to say on the rally, one BBC reporter posted the following video. In it, Corbyn spoke about the condescending politicians or media outlets that claim Corbyn supporters don’t understand reality. And he challenged that arrogance by insisting:

We absolutely do understand it.

Although Corbyn’s message of hope and change has managed to spread in spite of media hostility, attracting massive crowds across Britain, the election is far from won.

To get the Tories out of power, the next couple of days will be crucial. And we all have an important part to play.