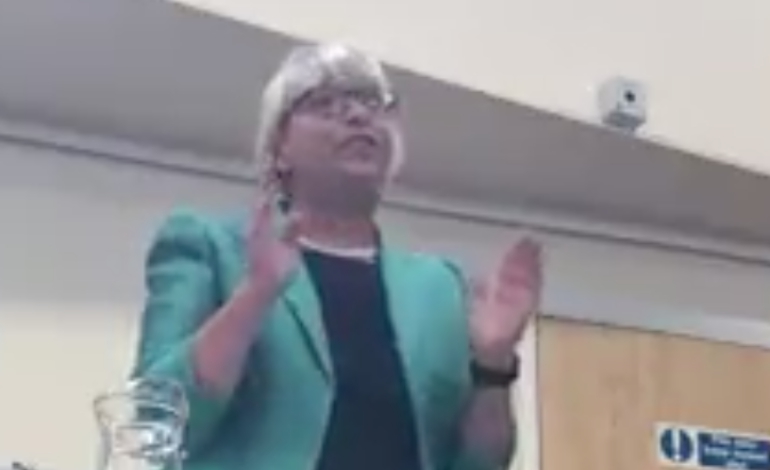 A Conservative MP candidate has told her constituents “don’t be so rude” after they applauded a teacher detailing the impact Tory cuts have had on her school. But this was just the tip of the iceberg for Sheryll Murray. Because during a political hustings, she said she was glad there were food banks, and told a woman to sit down rather than answering her question about arms sales to Saudi Arabia.

And if that wasn’t bad enough, allegations of assault have been made against Murray’s son.

Murray is defending her seat in South East Cornwall. And she faced a series of questions about Tory policies that have destroyed people’s lives.

Education campaigners asked her whether she would sign a letter about school cuts. But she refused. The Green, Labour and Lib Dem candidates all signed it. Instead, Murray patronised her audience, telling them the issue was “often confusing”.

But a local teacher set her straight on the situation in local schools:

Schools in your constituency, I’m afraid madam, have suffered.

Well I’ve met your headteacher and he’s not saying that at all.

But when the audience started applauding the teacher’s response, Murray turned on them, saying:

Don’t be so rude.

How politely applauding a teacher attempting to tell their MP about the dire state of schools could be seen as rude is anyone’s guess. And Murray’s claims about the local headteacher are also dubious given that every single school in Cornwall has written to parents about both current cuts and proposals to change the funding formula.

I am really pleased that we have food banks.

And she seemed to think they were a good thing. Even though the benefit her own government introduced, Universal Credit, is often subject to delays, meaning people are left with no money and no food.

According to the Trussell Trust, Universal Credit has caused a 16.85% increase in people needing emergency food parcels. It states the six-plus weeks waiting period “can be serious”:

leading to food bank referrals, debt, mental health issues, rent arrears and eviction. These effects can last even after people receive their Universal Credit payments, as bills and debts pile up.

The Trussell Trust also said that those engaged in seasonal work are particularly affected. This is a big problem in Cornwall where much of the employment market [pdf] is based on tourism and agriculture – both of which are seasonal.

And this is without mentioning those in work such as nurses and police officers who are now having to use food banks.

It is abhorrent for a Conservative MP to be pleased with this record. But Murray didn’t like the audience challenging her. And when one disabled woman stood up to interject, Murray threatened to call the police, and her son stood up to intervene.

You can watch this exchange here:

And when an audience member questioned her about Saudi Arabia, Murray didn’t fare much better. In fact, she didn’t answer the question at all, preferring instead to tell her constituent to “sit down”.

As Jeremy Corbyn pointed out in the wake of the London attacks, there need to be “difficult conversations” about the UK’s relationship with Saudi Arabia and other Gulf states. After all, the Home Office has recently sought to suppress an inquiry into terrorist funding because it reportedly highlights the role Saudi Arabia plays in funding terror. And May is a strong supporter of Saudi Arabia, with her government recently approving £3.5bn worth of arms export licences.

And if this wasn’t bad enough, her team is now being investigated for assault following the hustings. Juliet Johnson claimed:

I went outside… to tell her that the elderly and chronically disabled people I support are struggling and afraid because of delays in needs assessments. I had not spoken during the debate… not heckled her and was not aggressive or confrontational. I just said ‘Excuse me Sheryll’, stepped towards her, and was shoved away by a man. He sort of came across my body, pushed me and struck out with his arm, hitting me in the throat.

Murray seemed to litter her comments throughout the hustings with patronising contempt. She abused the audience, told them they were being rude for supporting a teacher, praised food banks, and refused to answer questions. She displayed total arrogance and a lack of understanding of the real issues people are facing.

A spokesman for Murray’s campaign said it would be inappropriate to comment.