Theresa May gets asked a personal question. It's the most awkward 22 seconds of her campaign yet [VIDEO] - Canary 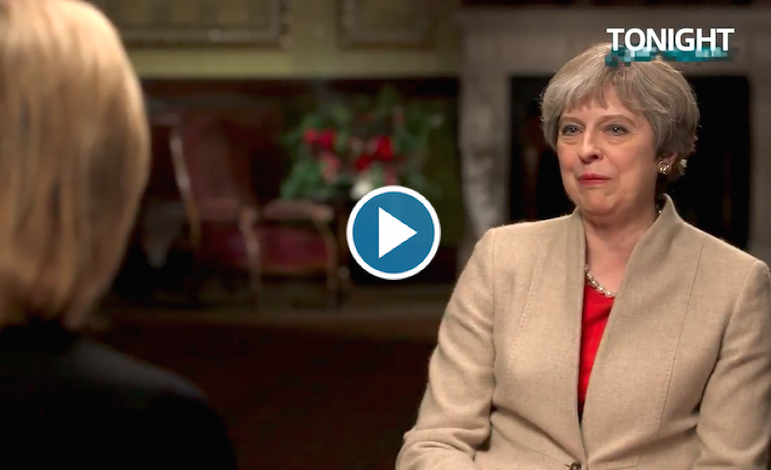 Theresa May has come out of hiding to do an interview in the hope she can save her catastrophic election campaign from all-out collapse. But it hasn’t gone well. When ITV‘s Tonight programme airs on the evening of 6 June, millions will see the incumbent Prime Minister demonstrate just how out of touch she is with, well, just about everyone else in the country.

The interview will touch on issues ranging from terrorism to cuts to public services. But it will likely be remembered for 22 particularly excruciating seconds, starting when host Julie Etchingham asks May: “What’s the naughtiest thing you ever did?”

Oh goodness me. Well, I suppose… [pause] Gosh. Do you know, I’m not quite sure.

After Etchingham presses her, May finally replies:

Nobody is ever perfectly behaved [nervous laugh], are they? I mean, I have to confess when me and my friends used to run through the fields of wheat, the farmers weren’t too pleased about that.

You can watch the entire exchange here (through your fingers, ideally):

People on Twitter were quick to point out that running through fields of wheat is self-evidently not the naughtiest thing the PM has ever done.

Some pointed out her record on security. The PM has drastically cut policing numbers and suppressed a terrorism inquiry because it reportedly highlights the role of Saudi Arabia – a regime which May strongly supports and helps to arm – in funding terror:

Cutting 20,000 police, 1300 armed police, 5% of MI5, lying to public about it, suppressing report on funding terrorists and report on NHS

Others suggested that the wholesale destruction of the NHS, which May’s party has deliberately and recklessly underfunded for seven years, was slightly worse than running through a field of wheat as a child:

Is it "Destroyed the NHS"?

And others pointed out the Conservatives’ record on welfare cuts. The government’s own figures show that more than one person every hour died within six weeks of their Work Capability Assessment (WCA) between 2010 and 2011. The government quickly stopped counting the figures, but the UN has repeatedly condemned the Conservatives for committing “grave” and “systematic” violations of disabled people’s human rights.

Probably being complicit in the deaths of so many poor and disabled would top the list, at a guess.

Terrifyingly out of touch

But the real damage the interview has done to May’s election chances is in inadvertently exposing just how out of touch she is with the lives of those she hopes to keep governing:

Oh my oh my. We have the same problem on the streets of Greater Manchester. Damn kids running through wheat fields.

Meanwhile, Jeremy Corbyn’s campaign is clearly resonating with the British public on a massive scale:

This is a picture of Jeremy Corbyn addressing a crowd in Gateshead.
We never pulled crowds like this in 1997. #GE2017 pic.twitter.com/YsWPi7z7Lk

While Labour has focused on policies, the Conservatives have tried to make this general election all about personalities, gambling that the media smears against Corbyn would sweep May back into Number 10. But that approach is now backfiring.

It’s backfiring for one very simple reason. Before the election campaign started, the British public knew very little about the real Corbyn or the real May. Corbyn had been wilfully misrepresented by the media on a massive scale. May was a new and distant Prime Minister who largely hid behind platitudes written by others. Now it turns out that, the more that people see of Jeremy Corbyn, the more they like him. And the more they see of May, the less convinced they are by her.

And on Thursday 8 June, Britain has a once-in-a-generation chance to turn the tables on the arrogance and entitlement that have characterised May’s campaign and the Conservative government’s policies for the past seven years. We need to seize that chance.