If you're thinking of voting Conservative, these four people could make you change your mind [VIDEO] - Canary 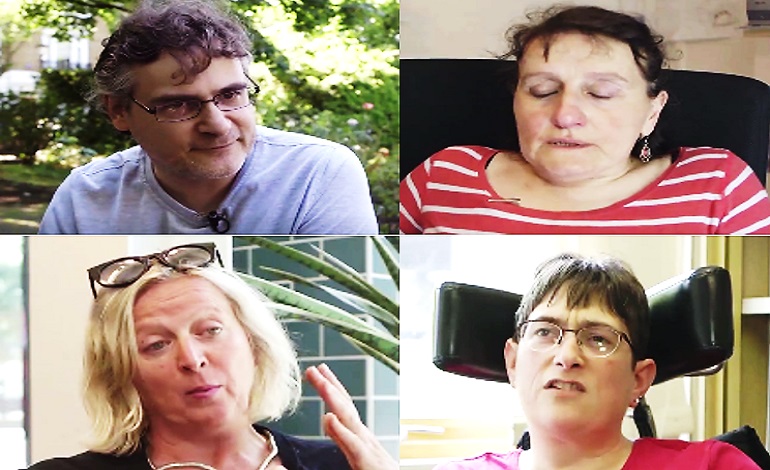 With just days left of campaigning in the general election, there is one issue which goes right to the heart of who the public should be voting for on 8 June. And the stories of four people should make any voter stop and think about their decision.

What’s important at this election?

Disabled People Against Cuts (DPAC) is a disability rights campaign group. And it has released four interviews with people directly affected by the last seven years of Conservative rule. The idea is to raise awareness of just what the Tories have done to sick, deaf and disabled people, and those living with mental health issues in the UK. Each film takes a slightly different angle on the subject. but DPAC’s overriding aim is clear: “to expose the reality of welfare reform and why this election matters so much to deaf and disabled people”.

The first film is an interview with David. He lives with a bipolar disorder and talks about how the state has made him feel like a “scrounger”, and the pressure of being in the welfare system:

Andria features in the second film. She is a single parent who lives with chronic mental and physical illnesses. And she talks about the “culling” of “a population who are already struggling all the time, anyway”:

A different Jenny is the subject of the fourth film. She works as a budget and support coordinator. But Jenny raises the issue of how Conservative reforms are forcing disabled people onto benefits, when they don’t want to be:

The films were made with Tough and Rumble media. Anthony Swords from the company told The Canary:

I approached DPAC to make these videos because I care about the future of the UK and what kind of society I want to live in. I feel that the mainstream media has let the public down by under-reporting the heartbreaking stories of suffering that seven years of Tory cuts have brought to the disabled community. The majority of people seem totally unaware of what is being done to the most vulnerable in our society in the name of ‘austerity’.

Swords feels that the narrative of the election is being framed around Brexit. Which he believes is wrong:

I felt it was important to make these films because I want people to think carefully about how they will vote on 8 June. I wanted people to know that this election is more than about ‘Brexit’ and immigration. It’s hard but people need to step away from the fearmongering and look at the bigger picture facing our healthcare system, our social care system and our welfare system because, as Jenny and David both say in their videos, anyone can become disabled or have an elderly relative that needs extra support.

I think it has become clear that the key question from this election is: ‘what kind of society we want to live in? Do we want a safer, fairer and more just society that provides a good standard of living for everyone? Or do we want another five years of Conservative policies that target the poorest and most vulnerable in our society?’

No one is safe

Co-Founder of DPAC Linda Burnip gave a stark warning to The Canary:

Any ordinary person with modest means, or a home they have scrimped and saved to buy, who votes Tory on 8 June can expect nothing less than further misery and deepening poverty. The Tories have spent the last seven years destroying the lives of disabled people, women and young people, and now they are even planning to do the same to pensioners. Not only will weak and wobbly Theresa May end the triple lock on pensions and take away the winter fuel allowance from pensioners, she will force you to sell your home to an Equity Release firm to pay for your elderly care. No one is safe anymore.

It could be you

The DPAC films show some of the cold, hard realities of what living under a Conservative government is really like. These are the stories that the mainstream media rarely show you. But they are stories that are being played out in every town, every city, up and down the UK. And some people have suffered even more severely than these. So when you cast your vote on 8 June, remember David, Andria and the two Jennies. And mark you ballot accordingly.