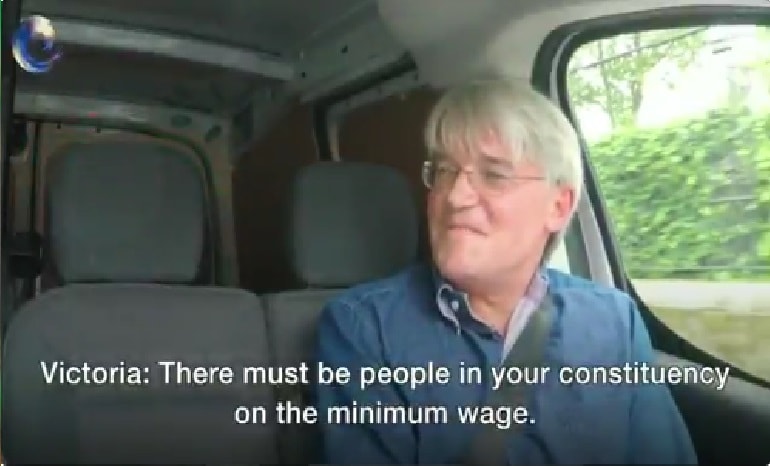 The media is too busy attacking Shadow Home Secretary Diane Abbott to notice what may well be the greatest car crash of the election so far. Senior Conservative MP Andrew Mitchell fluffed three different basic questions in a row on national television. Then, the BBC’s Victoria Derbyshire caught him trying to hide the number of properties he owns.

Meanwhile, Abbott is under widespread, heavy fire for apparently not knowing (or being able to recall) specific details from a report on terrorism.

Perhaps most striking is that Mitchell has no idea what the national minimum wage is – he failed to guess, twice:

Conservative Andrew Mitchell doesn't know how much the minimum wage is pic.twitter.com/GJqekBJmuw

Asked what the minimum wage is, Mitchell tried to avoid the question, saying:

When pressed, he offered:

Realising evasion wasn’t going to work, Mitchell failed to guess what it is:

Derbyshire pointed out that members of his constituency were probably on the living wage. He replied:

The Conservatives faced criticism for hijacking the term ‘living wage’ during David Cameron’s premiership. Rhys Moore, the director of the Living Wage Foundation, said “this is effectively a higher national minimum wage and not a living wage”. Currently, the real living wage is set at £9.75 per hour in London and £8.45 elsewhere. The Tories’ £7.50 version not only pretends London doesn’t exist, but is also well below par for the rest of the country.

After the minimum wage failure, Derbyshire moved on to housing. Questioned on how many council homes his government built last year, Mitchell replied:

I haven’t got the figure on my fingertips.

Then, asked if he knows how many people are on the housing waiting list, Mitchell said:

Mitchell, who once called a police officer a “fucking pleb”, tried to assure BBC viewers that his party would build more houses. So Derbyshire made the obvious point:

You’ve been in power for seven years.

Currently, if you earn the national average salary of £26,500 (which is reportedly halved if you take the 10% of highest earners out of the equation), 91% of England and Wales would be beyond your income. That’s under Mitchell and his government’s watch.

Shortly after, the Conservative candidate’s inability to answer questions about the problems facing ordinary people looked even worse. Because Derbyshire challenged Mitchell on how many properties he owns. After Mitchell tried to equivocate, the BBC host cut through:

But you own three properties.

Mitchell was forced to reply:

Journalists conducting ‘gotcha’ interviews – trying to catch politicians not knowing figures off the top of their heads – can be superficial. But Mitchell seemed very cavalier about issues impacting ordinary people. He quite clearly didn’t have a clue what the minimum wage is, a basic fact about Britain today. But other than the BBC itself, no media outlet had covered the interview at the time of writing.

Given the media storm surrounding Abbott, the double standard is glaring.