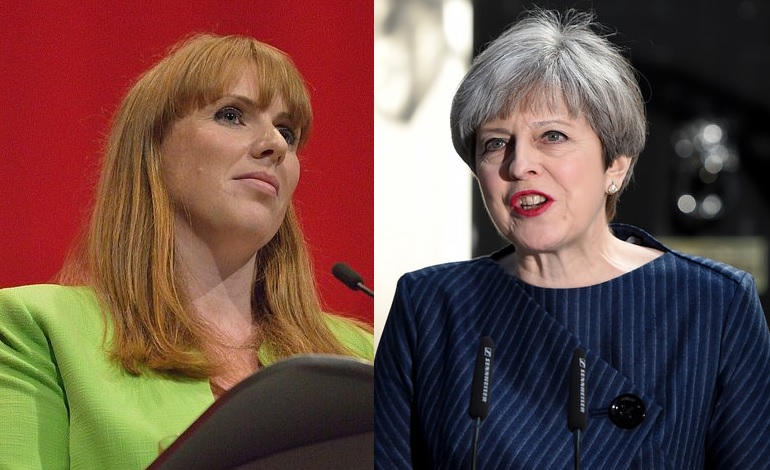 Labour’s Education Secretary Angela Rayner just humiliated current Prime Minister Theresa May. But she also gave the public a good laugh. Because she pointed out that, if ‘May’s team’ (and the media that support her) want to suggest she is actually meeting “ordinary voters”, they’d better start removing conspicuous evidence to the contrary.

Tory media says the PM up early talking to ordinary voters in a cafe today,a word of advice next time take the Blue Tory rosettes off first😳 pic.twitter.com/6HOladB8dq

Just an ordinary day: May

May was out on the campaign trail on 6 June. And as Rayner notes, she saw Tory-supporting media outlets suggesting that May was speaking to “ordinary voters” at a cafe. However, of the three visible people, two are wearing Tory rosettes. Obviously, someone didn’t put continuity of messaging as a high priority.

May was visiting a cafe in Lancashire. And conveniently, May was able to share with the cafe bakers that she worked in a bakery as a schoolchild.

But people won’t be surprised that May was flanked by supporters at the cafe. Because that’s been the make-up of almost every ‘crowd’ greeting May throughout the campaign. She has riskily ventured into the odd factory from time to time. But on those occasions, even with Tory supporters in place, stage managers have given quite strict instructions about how people can behave:

Tories in Scotland waiting for PM to arrive have been told to make sure there's lots of cheering or 'it will look like there is no one here' pic.twitter.com/mvNRR5MhBC

May’s opponent in the campaign, however, has generated a different atmosphere entirely. Labour leader Jeremy Corbyn has appeared at many public events. On 5 June, for example, he spoke in Gateshead. And he drew a crowd of thousands.

10,000 turnout just now for Jeremy Corbyn in Gateshead. Few will ever know because the BBC did not report it. pic.twitter.com/XkVXQbPqsr

So many people turned up, in fact, that many couldn’t get into the event. This situation inspired the hashtags #QueuesForCorbyn and #CarParksForCorbyn as people tried to show their support from the fringes of the event.

This is what it's looking like at #CarParksForCorbyn in #Gateshead. Any idea of numbers here guys? #Corbyn pic.twitter.com/MGafWuO1VT

#QueuesForCorbyn – got a feeling we *might* not get in to see @jeremycorbyn #Gateshead pic.twitter.com/JUpZf8fKhT

The BBC, however, generally failed to report on this extraordinary turnout. It did make sure people knew that May met with a few Welsh farmers the day after, though.

It’s now less than 48 hours until supporters for both parties get to put their preferences into action. And it’s crucial that people turn up and cast their votes at the ballot box if they want their preferred candidate to win.