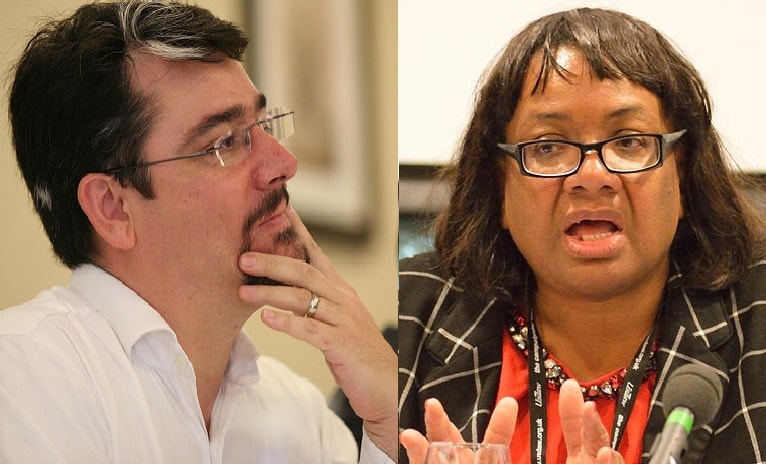 One of the Conservatives’ favourite journalists has posted a dodgy photo of himself in bed with a cardboard cut-out of Shadow Home Secretary Diane Abbott. Paul Staines runs the blog Guido Fawkes, which has been celebrated by Conservative Ministers and backbenchers alike. This includes former Prime Minister David Cameron, Foreign Secretary Boris Johnson, and former Education Secretary Michael Gove.

Staines stands accused of misogynoir (both sexism and racism) for the way he’s mocked Abbott on social media: 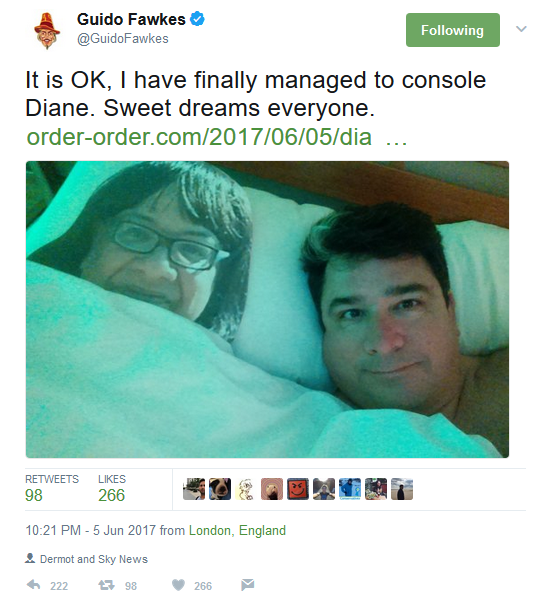 But the majority of people condemned the post. Political commentator Maya Goodfellow pointed out that the image isn’t a one-off:

Guido Fawkes' tweet about Abbott is awful. She gets a disproportionate amount of abuse for simply being a black woman in frontline politics

People have often noted that Abbott attracts a disproportionate amount of abuse as a prominent black woman in politics. On social media, many single her out for alleged incompetence while ignoring the appalling CVs of senior Conservative politicians.

George Osborne got a 2:1 in Modern History, rejected by The Economist; and became Chancellor of the Exchequer. https://t.co/U6v2iDN8lQ

Guido Fawkes and the Conservative Party

Staines positions Guido Fawkes as being outside the Westminster bubble. But swathes of the Conservative Party attended the blog’s ten-year anniversary party, which featured contributions from top Conservatives. Former Prime Minister Cameron branded the blog:

Required reading for all those working in politics, including me.

they are the indispensable dung beneath the rose bush of democracy.

As well as Staines, Johnson has faced criticism for his Radio 4 attack on Abbott on 6 June.

Nor did May make headlines when she pulled out of all her regional BBC interviews that same week. That’s partly because the BBC covered for May. The outlet instructed its staff not to post online that the Prime Minister had cancelled. The news only broke after a BBC insider defied orders and informed Guardian columnist Owen Jones.

Staines’ disgraceful attack on Abbott must be condemned. Political debate should focus on the merits of policy, not the sexual intimidation of black female politicians. Parliament is 71% male and 93% white, while the population is 51% female and around 20% non-white. We need to encourage better representation, not harass the most prominent female black MP around, who’s done great services for minorities in this country. Staines should be ashamed.

– Get involved with 50:50 parliament, a cross-party pressure group for gender equality in politics.