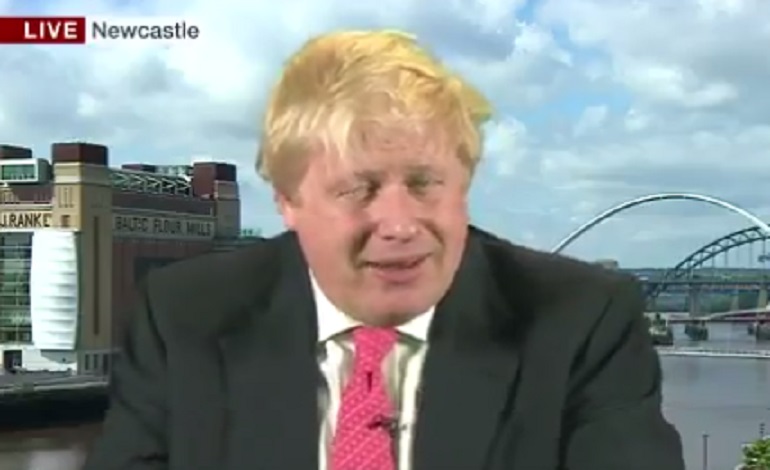 On Tuesday 6 June, Boris Johnson was doing the rounds on the mainstream media. The Foreign Secretary was talking about, among other things, policing in the wake of the London attacks. But the BBC allowed him to repeatedly lie about the Labour Party and Jeremy Corbyn’s stance. So here are the corrections you won’t see elsewhere.

Johnson said on BBC Breakfast that, in the wake of the London attacks on 3 June which killed seven people, “you need to have a strong and robustly financed Metropolitan Police service”. But he then moved onto Corbyn’s stance, firstly saying:

This is a lie, created in part by BBC Political Editor Laura Kuenssberg’s misreporting of something Corbyn said. The Corbyn quote “I’m not happy with the shoot-to-kill policy” comes from an officially discredited report from Kuenssberg. The BBC Trust found the report had not been “duly accurate”, because it took the comment out of context. Corbyn was talking in terms of shoot-to-kill generally, whereas Kuenssberg framed it in terms of terrorism. The Labour leader has since said:

I will take whatever action is necessary and effective to protect the security of our people and our country. That includes full authority for the police to use whatever force is necessary to protect and save life…

Once again, this is simply not true. As Corbyn explained at the BBC election debate on 31 May:

And he was right about the fact that Tories voted against anti-terror legislation. For example, since 2000, Theresa May has voted against or been absent from votes on:

But as most things come in threes, Johnson hadn’t finished peddling inaccuracies about Labour. Luckily, eagle-eyed lawyer-turned-campaigner Peter Stefanovic picked up the Foreign Secretary’s final one. And he thoroughly debunked it:

And if anyone’s record on the police force needs questioning, it’s the Tories. Because since 2009 in England and Wales, 20,000 police officers have been cut; real terms budgets have been reduced by 18%; total employment in the force reduced by 17.4%; in 2016, the number of officers on sick leave increased by 11.5%; and the number of armed officers has halved [paywall] in the past 15 years.

Some BBC balance among the BBC bias?

With just two days of campaigning left in the run-up to the general election, the Tories seem to be on the ropes. By wheeling bumbling Boris out to repeatedly use baseless smears against Corbyn and the Labour Party, the Conservative campaign is showing its desperation. And for BBC Breakfast to allow him to peddle his nonsense, unquestioned, is not acceptable from our public service broadcaster.

But to be fair to the BBC, there was a wonderful segment on Radio 4 Today on 6 June [from 2.10.00]. And it partially made up for the shambles on BBC Breakfast. Because host Mishal Husain was not allowing Johnson an inch of wiggle room to spout his drivel. And she eventually let her frustration show. Listen and enjoy: