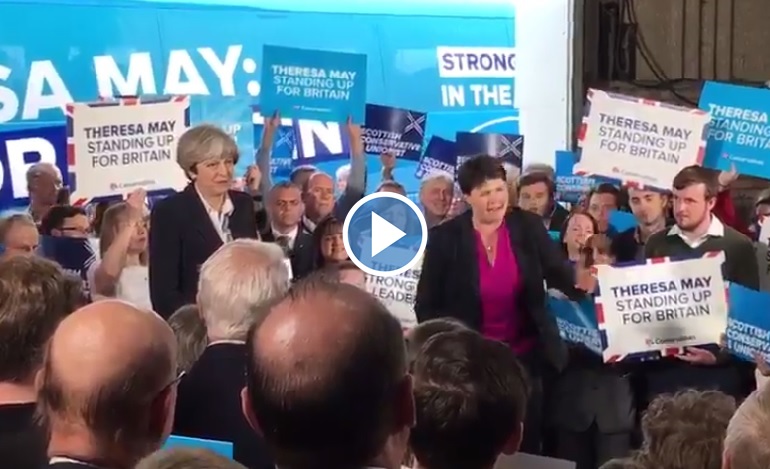 Scottish Tory leader Ruth Davidson is no stranger to slip-ups. But on 5 June, when Theresa May visited Scotland, Davidson revealed what just might be a new Conservative slogan. The only problem is, it’s a pretty embarrassing one for the Tories.

Theresa May had joined Davidson at Clockwork Removals and Storage in Edinburgh. And Davidson welcomed May by saying [1:15] (emphasis added):

Scottish Conservative MPs aren’t going to the House of Commons to try and rip Scotland out of Britain. We’re there to try and make Britain great again.

Quite an embarrassing slogan, considering that the Tories have been in power in Britain for the last seven years. So we could well say that Davidson’s message is that, actually, Tory rule in the UK has not been that great.

It may also be a sign that the Conservative Party is making a late play for the same kind of voter that US President Donald Trump sought to attract in 2016 with the phrase ‘Make America Great Again’.

This is not the first time that Davidson’s language has embarrassed her, of course. She has claimed, for example, that Jeremy Corbyn’s belief in obtaining “peace through negotiated agreements” is “offensive to anyone who’s worn the uniform”. Even though Conservative Party idol Margaret Thatcher and other Conservatives have also negotiated with their enemies in the past.

She has also spoken about “helping those with mobility issues get out into the countryside & hills”, in spite of the Conservative government having overseen 51,000 disabled people losing their Motability vehicles.

And she has even mocked an SNP rival for her strong Scottish accent. Something that didn’t help to diminish the caricature of the Scottish Conservatives being self-hating Scots serving Westminster interests.

With the blunders of both Davidson and Theresa May, it’s perhaps no wonder that an organiser reportedly had to remind the 70 or so supporters gathered in Edinburgh to cheer and clap to avoid it looking “like there is no one here”.

And that couldn’t be further from a Jeremy Corbyn rally in Gateshead on 5 June. Thousands of people there needed no reminder to cheer and clap as Corbyn rallied people around his promise to represent ‘the many, not the few’.

Under the Tories, the truth is that Britain has been far from great for most people. The massive crowds turning out for Corbyn know that. And judging by her comments, Ruth Davidson’s subconscious might too.