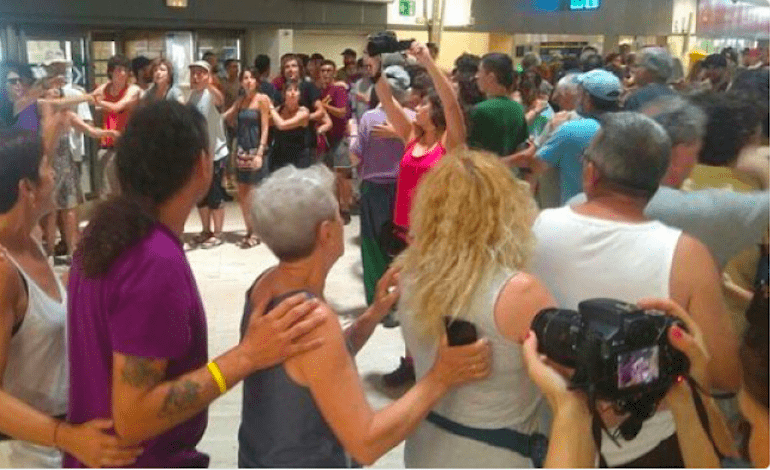 Campaigners in the UK are praising the passengers on board a recent flight with low-cost Spanish airline Vueling from Barcelona. After a Senegalese man, being deported to Dakar, was brought on board in handcuffs, six passengers took a stand by refusing to take their seat.

The flight on Saturday 15 July did eventually take off, albeit two and a half hours later. The Local reported that the man was being deported after he was refused entry. It said he did not have a resident or work permit, but didn’t identify whether he had an entry visa.

The six passengers insisted he stay in the country after hearing him complain. The Spanish Civil Guard removed them from the flight. And guards nonetheless escorted him on the return flight in handcuffs.

More of this sort of thing

Campaign group Caravana Abriendo Fronteras (‘Opening Borders’ Caravan) fights against deportations like this. And after the events on the Vueling flight, they launched a protest at Seville’s airport on 16 July:

Groups in the UK also praised the action, saying it was an example of how ordinary people can act and protest against unjust deportations. 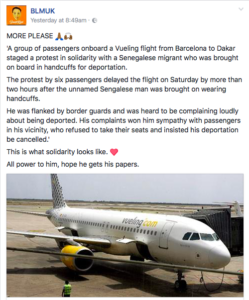 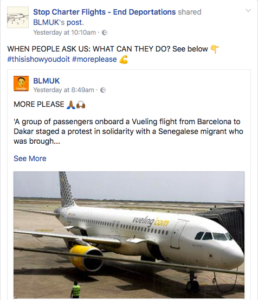 The news also comes as monitors warn that Spain is the next country that is experiencing increasing numbers of undocumented arrivals from Africa. Along with poverty and war, it is the lack of legal migration paths that force people to make such dangerous journeys. They are also facing harsh conditions in Spain and its territories, as The Canary reported in January.

The number of people taking boats from North Africa to Spain has more than doubled from last year. Between 1 January and 25 June, at least 6,464 people arrived in Spain from from Morocco and Algeria, compared to 2,476 the previous year. And in June 2017, there were four times more arrivals than the year before.

In tandem, 380 people have reportedly been rescued in the western Mediterranean while 50 may have drowned on 4 July off the coast of Spain. And far-right groups are threatening to hinder rescue efforts.

It looks as though people are choosing this new route because Libya is becoming increasingly dangerous. Italy saw a rise in arrivals crossing from Libya after the EU-Turkey deal took effect. This deal saw fewer people being able to cross into Greece from Turkey. But this change in route is simply proving once more that, if war and poverty keep pushing people to leave their countries of birth, they will keep finding ways to escape. And with fewer safe and open pathways available, such as by plane, more people will be putting themselves in peril.