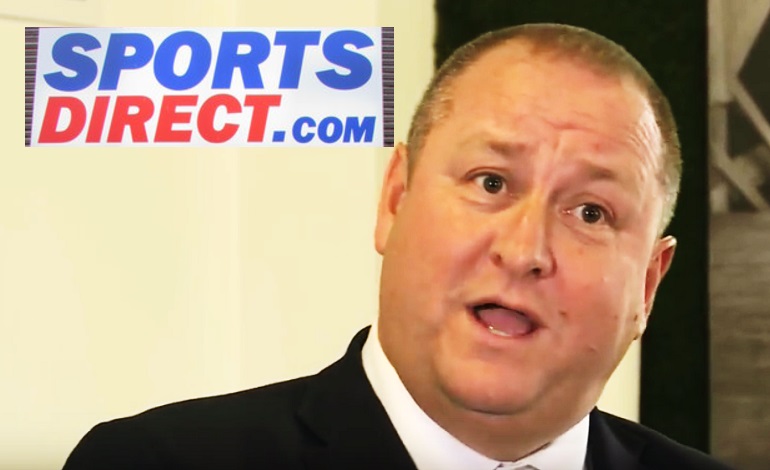 Founder and Chief Executive of retailer Sports Direct, Mike Ashley, has tried to shift the blame away from himself as his ailing company descends into further chaos. And instead of recognising that revelations about his treatment of staff may have impacted the company’s results, billionaire Ashley appeared to pin the blame on Brexit.

Sports Direct profits took a nosedive of nearly 60% last year, falling to £113.7m – down from £275.2m the previous year. And underlying earnings per share plummeted 67.9% to 11.4p. But Ashley took aim at the weakening pound and the country’s decision to leave the EU for the disaster. He said:

As previously announced, the devaluation of sterling against the US dollar has led to a significant impact on [earnings] and profits… We have put in place hedging arrangements to minimise the short-term impact of currency volatility, but like many UK retailers we remain exposed to medium/long term currency fluctuations. Our results were also impacted by provisions and depreciation charges…

But in contrast, Sports Direct’s total sales grew by almost 12% to £3.2bn, while revenue increased by 6.3% to £2.1bn. Some of the variation between sales and profit could also be put down to the fuel costs of transport, which increased by 3.4% in December 2016 alone.

We will continue to be conservative in managing for the medium to long term, which may result in short-term fluctuations in underlying [earnings], particularly given the continued uncertainty surrounding Brexit.

Shares in the company have more than halved over the last two years. Sports Direct’s lack of strategy for absorbing the impact of Brexit has also hit its results. And while there is uncertainty around the impact of Brexit on business, the ongoing scandals surrounding Sports Direct are likely to have been a major contributor to the retailer’s woes.

As The Canary previously reported, Ashley’s Sports Direct has been accused of numerous abuses of staff. These have included three quarters of employees having been on zero-hours contracts, and historically not paying the minimum wage through their practices. Allegations included Sports Direct docking 15 minutes of pay if an employee was one minute late. Also, employees filmed unwarranted searches of them at the end of shifts:

Sports Direct also operated a strike system with employees – six strikes and they’re fired. Workers have got ‘strikes’ for taking too long on a toilet break; too much chatting; if they’ve had to take time off due to having a sick child; and after returning from a period of sickness themselves. This has led to workers being so afraid that they’ll lose their jobs that they have gone into work with potentially life-threatening conditions. According to figures from Unite, there were 110 ambulance call-outs to the warehouse, with 38 of these being for chest pains.

Ashley was hauled in front of a commons Select Committee in 2016 to explain Sports Direct’s working practices. MPs described conditions in the company’s warehouse as being like a “Victorian workhouse”.

Sports Direct: not out of the woods yet?

But Ashley and Sports Direct claim things have improved. The Guardian reports that:

In its results statement Sports Direct said it had set up a system to capture staff feedback called ‘Your Company Your Voice’ for all staff, including agency workers at the warehouse, ‘to raise any issues of concern or suggestions for improvements’. The retailer said it had also recently conducted a survey of 3,300 staff at Shirebrook that showed “an overwhelming majority of people in our warehouse currently feel they are treated with respect”.

Ultimately, Sports Direct’s results are bad not only for shareholders, but for employees too. Historically, they have been treated appallingly by Ashley and the company. And its latest, dire results may be a combination of lessening consumer confidence, incompetent financial management, and the direct financial impact of Sports Direct having to treat its staff properly. But will the company’s financial woes filter down and impact on the welfare and job security of employees? With Ashley’s despicable track record, anything is possible.