A disgraced UKIP MEP tried to engage with modern culture. It didn't go well for him [TWEETS] - Canary 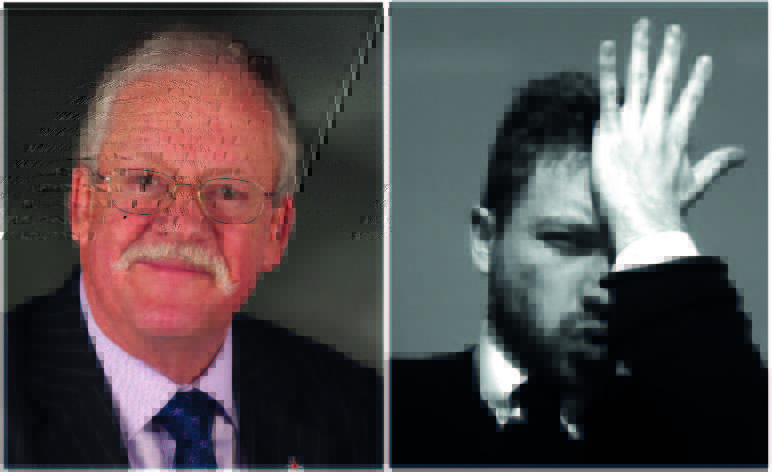 UKIP MEP Roger Helmer has a long history of saying preposterous things. He has also been forced to step down from the European Parliament for allegedly misusing public funds. But before leaving his post in disgrace, he managed to embarrass himself one more time.

Helmer has previously said that date rape victims should share responsibility for the act. He has also said homophobia “simply does not exist” because he has “never met anyone with an irrational fear of homosexuals”. An argument which is popular among children wise enough to know what ‘phobia’ means, but not so wise as to understand that words commonly have multiple meanings.

He’s also seen as being so preposterous, and his party so irrelevant, that people reacted to his latest insult with mockery; which may be the best course, as taking him seriously would suggest he was still a serious proposition.

This is what Helmer said:

Hey, maybe you could regenerate as a human being!

He was having a nap: pic.twitter.com/FCsQKE00r2

The way he's come up with this is idea is fucking dreadful, but would legit watch that… pic.twitter.com/gAdK6UvrFw

Others pointed out that even Doctor Who‘s creator (who was born in 1917) was more progressive:

Even the 1980s were more open minded than you are now. pic.twitter.com/JU5mVrLNfI

And that UKIP representatives maybe shouldn’t mention dogs in public:

YouGov polling finds UKIP voters are most supportive of a person's right to have sex with a dog. pic.twitter.com/fElOU8B6ww

Quit while you’re behind

A credible human being wouldn’t think such drivel in the first place, obviously.

What’s unbelievable is that not only did Helmer not apologise, he instead attempted to defend his position: 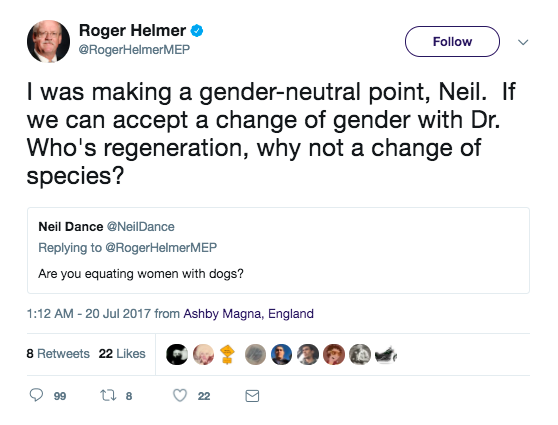 Spectacularly, Helmer attempts to claim that his point was:

Two paradoxical stances that are explicitly irreconcilable. Even for someone with such an in-depth understanding of Time Lord technology.

And, of course, Helmer was mocked again:

Why not replace a UKIP MEP with a Turnip?

How's about this: "If we can give women the vote, why not rabbits? If we let women drive, why not cats?"

In that case, imo, choosing an "alien species" rather than one often used as a slur to describe women would have better made your point?

You do realise dogs can't talk, Roger? Well, except for 'Sausages' obviously, but this would somewhat limit the Dr Who script

Obviously, bigotry and prejudice need to be called out wherever they’re found. Especially when it’s at the highest level of office.

Roger Helmer is at the lowest level of office, though, and he’s on his way out. As such, the best way of putting him in his place is by taking the piss. Because the alternative is giving him the impression that people still take him seriously.