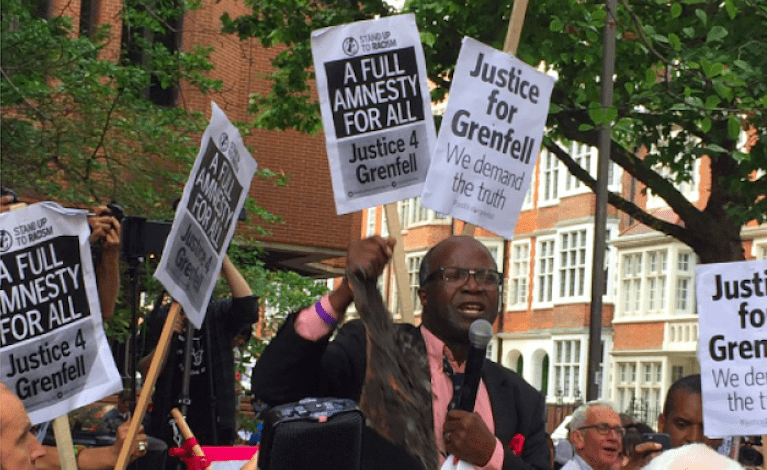 I watched the council meeting outside the Royal Borough of Kensington and Chelsea (RBKC) town hall on 19 July, and it was shameful. It was shameful for the council members, because Grenfell survivors in attendance showed more leadership in their addresses than the whole cabinet combined.

And what survivors disclosed showed the council’s continuing contempt for members of the Grenfell community.

The council meeting on 19 July was the first since the disastrous decision to close RBKC’s 29 June meeting to survivors. It was also cut short due to the presence of journalists. This latest meeting was open to both the media and survivors.

But outside, another audience was showing solidarity with the survivors and families of the deceased and missing.

A protest was organised by the Justice4Grenfell campaign. It kicked off at 6pm, and the meeting started 30 minutes later. Speeches included a passionate delivery from a survivor and family member who had lost loved ones in the fire. He said in a speech that they were being treated “worse than dogs” in the lack of accountability being held for the fire.

If there were dogs in that building… they would have arrested the people who looked after those dogs.

He later went on to address the council meeting and said: “If my dog died, the RSPCA would come and ask me within three days how my dog died”. He pleaded for the council to be more forthcoming with information because, he said, the lies were unbearable.

That such an address is necessary is surely shameful for the council. Survivors really hammered home their point, and with the community watching, there was no possibility of censorship. The chamber’s subtle conduct risked showing contempt and disregard for constituents who are at the lower end of the socio-economic scale in the borough.

Although a supposedly open meeting, one resident continuously knocked on the door and was let in only after a man asked for him to be let in while on the mic. One councillor allegedly requested that he wasn’t let in.

There were then not enough chairs for residents while council members relaxed among empty and comfortable seats. One survivor who addressed the chamber commented:

I feel embarrassed – I can’t even look at the survivors in the eye. I had to ask for a chair for my elderly neighbour, Edward.

And with the air conditioning broken, members of the council received bottles of water while the survivors and those watching in the overspill room received none. One person commented that only eight people were given a polystyrene cup of tap water.

Some speeches were also paused over concerns about access, which prompted a resident to comment that officials should show as much concern for Grenfell as they did for the security of the room.

“We saw you roll your eyes, madam”

This all showed that the new Conservative leader of the council, Elizabeth Campbell, will have a tough job ahead of her. She proved to be deeply unpopular among crowds and the survivors. While she promised an inclusive and more attentive approach, she seemed to convince no one.

The Grenfell Action Group blog’s co-author, Edward Daffarn, mentioned how disingenuous he thought the council was in his address:

You roll your eyes at me, but I’ll show you an email that we wrote to you in July 2010, on the eve of this cabinet taking the decision to fund Kensington Aldridge Academy. We wrote to you, and you were CC’d into that email and we told you that if you build this building you will be putting the fire safety of Grenfell Tower residents at risk and you ignored us.

That email was CC’d to… the leader of the council, and to you, Elizabeth Campbell, and you ignored us. The way you treated our community groups with contempt was despicable.

Accusations that a council member rolled her eyes were repeated a number of times. Including by Silchester Estate resident and campaigner Piers Thompson, who said:

We saw you roll your eyes, madam.

Some speakers were kinder and simply said that the council was disorganised, unlike the community:

We are united, you should learn from us.

But whether it is actual contempt or complete disorganisation, one survivor described the impact it had on his life:

I live in a one-bedroom hotel. Me, my wife and my three kids.

He says he was forgotten about after his wife and children came out of intensive care, and all five of them remain in this small hotel room. Receiving nothing from any of the charities, he believes that everyone is just trying to tick boxes to appear to be doing something. But at the end of the day, people can’t live out of suitcases. And they want to be rehoused.

Campbell said in her address:

The next step is to provide you, the survivors, a new and permanent home. We’re talking to each and every one of you who’s lost their home. We are working with you to fully understand your needs… and will keep a flexibility and open mind to your preferences. I’m sorry that this has taken so long and many of you are still in hotels.

The council has allegedly identified many homes to be taken as soon as possible. But Campbell’s bid to increase social housing stock by 400 units in the next five years was followed by loud booing.

The residents of North Kensington can’t be blamed for being sceptical, however. Kensington and Chelsea has been actively diminishing its social housing stock. And council documents revealed that the council has only built 336 affordable homes since 2011, despite making millions from property development. This is along with conducting housing needs assessments that Grenfell survivors said were incredibly scary and that they feared being made homeless.

It’s not a great track record, and Campbell wants to say all the right things. But the Grenfell community doesn’t believe her, and all the eyes on this council put its actions under great scrutiny. So people see the eye-rolling, the lack of consideration, and the attempts to keep community members and Grenfell Tower fire survivors out of an important meeting. People also see the council trying to divert its responsibility to re-house estate residents in the borough.

That’s contempt by any other name. And council members should be ashamed of it.

– Read more articles from The Canary on the Grenfell Tower Fire.

Featured image the writer’s own