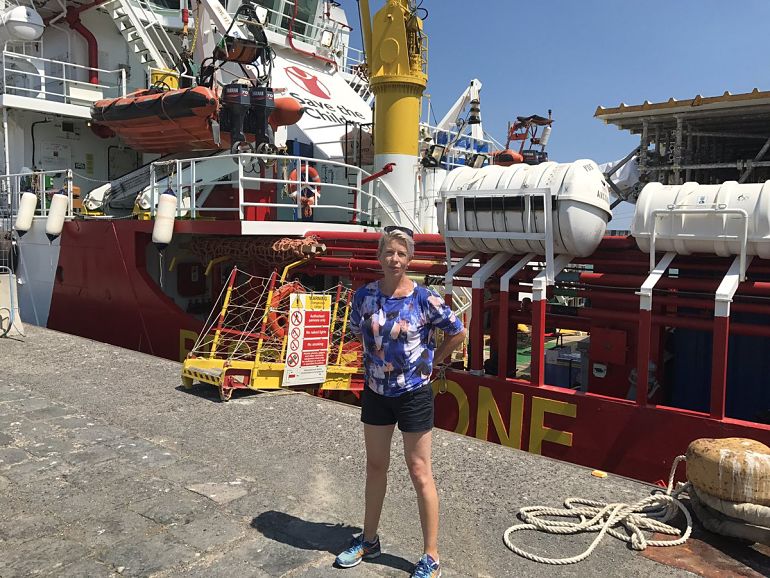 On 19 July 2017, The Canary wrote about how leaders of the far-right ‘Identitarian’ movement in Europe have chartered a ship to disrupt the activities of other ships in the Mediterranean that help to rescue refugees and migrants. The article also featured Mail Online commentator Katie Hopkins, who went off to take selfies with the movement. The Mail Online, meanwhile, published a story by Hopkins on this, which was soon deleted.

Here’s the real story behind that missing article.

The Mail also tweeted the article out:

.@KTHopkins: Sicily doesn't have a migrant problem, it processes them with stunning efficiency https://t.co/Fr4ohKEk0n pic.twitter.com/prbgC3Gldq

But click on that link, and you’ll get a message saying: “Sorry, we can’t find the page you are looking for.” And a quick search of The Mail Online site shows only the URL for the story – nothing else. At the time of publication, meanwhile, Hopkins had published no explanation on Twitter for the apparent deletion.

The Canary has now seen a recovered copy of the story – which may give us a rough idea of why the article is now missing. The article is titled: Sicily doesn’t have a migrant problem, it processes them with stunning efficiency. It’s the rest of Italy that has the problem, and possibly soon the rest of Europe.

The story covers Hopkins’ stay in the Sicilian city of Catania. And the style is an odd mix of derision and sympathy.

Hopkins starts off with an observation about the work of the rescue missions:

These economic migrants having been ferried to the island by charity rescue boats seemingly as responsive and as easy to hail as an Uber taxi after a big night out in Birmingham.

Then comes a comment that could be straight from the pages of a UKIP manifesto:

[Italian] Deputy Foreign Minister Mario Giro has threatened to release 200,000 migrants with Schengen documentation into Europe, a decision described by Mattia Toaldo, a senior analyst at the European Council on Foreign Relations, as the nuclear option… Austria has already sent 750 troops and armoured vehicles to defend its border with Italy.

Next, she praises the orderliness of the rescue missions while simultaneously insulting migrants:

There is no sign of the marauding migrants I encountered scrambling for the fence under tear gas fire at Calais.

But that’s all fairly standard from Hopkins – the woman who’s previously called migrants “cockroaches” and advocated using “gunships” to stop them.

The potential problem with her piece?

Hopkins also approached the Save the Children rescue ship, the Vos Hestia:

But in Hopkins’ story, there is a very different version of what happened:

I asked to join the crew at the dockside so they could tell me their side of their journey, hoping they would tell me what motivates them to be on board and what they would like to say to the people that accuse them of being little more than a glorified ferry. But despite being only a few feet away, they would not come and talk to me directly.

Save the Children, meanwhile, insisted that:

Katie Hopkins has not spent time with the crew of Save the Children’s search and rescue ship. Nor will she set sail with us on any of our rescue missions.

Could Hopkins’ false claim to have ‘spent time’ with Save the Children crew (which she contradicted herself) be one of the reasons why the story is now missing?

Whatever the reasons for the article’s disappearance, however, that’s not the real story we should be focusing on.

The real story? The “deeply concerning” activities of the far right.

The real story isn’t about Hopkins or The Mail. It’s the planned disruption by far-right activists of the rescue ships. Our 19 July article provided details of exactly who is behind these plans – and the ideology that drives them. And regarding the initiative, Rob MacGillivray of Save the Children stated:

Activities of far-right groups planning to disrupt search and rescue operations aimed at saving lives are deeply concerning. They ignore the moral and legal obligation to save lives at sea. Without NGOs and other search and rescue actors, many more lives, like the men, women and children we have rescued, would be lost. These activists wish to disrupt efforts to bring these people to safety. 2016 was the deadliest year on record in the Mediterranean with more than 5,000 deaths at sea, and 2017 could be worse still. As things stand, the Mediterranean Sea is one of the largest unmarked mass graves in recent times. As a humanitarian organisation, our mission is to save lives and we go where children face the greatest risks. During 2016 Save the Children assisted in the rescue of 2,700 refugees and migrants. So far this year the total stands at almost 4,000, including more than 625 children.

And it’s not just groups like Save the Children whose actions stand in direct contrast to the ethnic nationalism of the ‘Identitarians’. In Greece, for example, anarchists have been taking direct action, squatting empty buildings and hotels, turning them over to refugee collectives, and working with the self-managed collectives to provide food, clothing, medical care, and schooling.

The story behind the story

But there’s an even bigger story. One of war, exploitation, and starvation; of circumstances that logically push people to seek better living environments and escape conflict. This is the plight of the vast majority of refugees and migrants. And it stands within a historical context of colonial plunder and international corporate crime.

In such an environment of desperation and crisis, the ongoing work of groups like Save the Children, Medecins sans Frontières, and MOAS (Migrant Offshore Aid Station) – along with grassroots activists – is vital.

– Donate to Hope Not Hate’s campaign against the far-right campaign in the Mediterranean. Donate to Medecins Sans Frontières, MOAS, and/or Save the Children.

– Fight back against powerful media outlets which sow hatred and division. Join the media revolution by supporting independent news outlets which seek to hold the powerful to account while informing and inspiring the struggle for an alternative. Add more that you like in the comments section: