The Daily Mail completely screwed up its front page today. So somebody fixed it [IMAGE] - Canary

The Daily Mail screwed up its front page on 21 July. The concern it raised was legitimate: 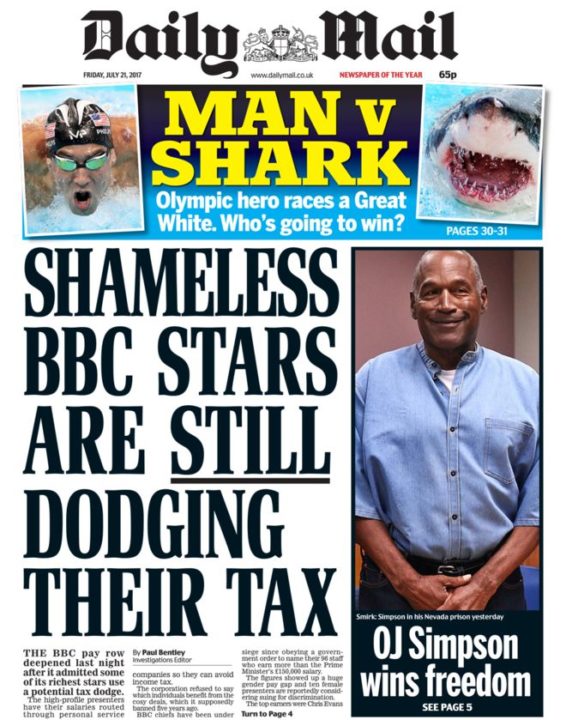 But it’s also a concern that many people have about The Daily Mail and its owner Lord Rothermere. A concern which prompted NewsThump to tweet:

Fixed that Daily Mail front page for you… pic.twitter.com/uEIAqFyhDp

Tax avoidance schemes are usually incredibly complicated. Paying the tax that you rightfully owe is generally quite straightforward, however. Which is why it’s usually concerning to discover that someone arranges their taxes through a series of complicated offshore companies.

Private Eye reported on The Daily Mail’s owner in October 2013. Specifically, it reported on Lord Rothermere’s status as a ‘non-dom’ – i.e. someone who lives in one country but has the legal (and tax) burdens of another:

Eye readers won’t need reminding, either, that the current Lord Rothermere, although born in Hammersmith and educated at Gordonstoun in Scotland, inherited his privileged tax status from his father, the 3rd Viscount, Vere Harmsworth, who had himself acquired a French ‘domicile of choice’ by becoming a tax exile in Paris from the 1970s and pledging his lifelong allegiance to the country about which his papers were not always so kind.

Private Eye also pointed out how he held his shares in the Daily Mail and General Trust (DMGT) abroad, and how this had benefitted him:

When in 2006 the house needed new east and west wings to accommodate an expanding family, the non-dom tax break loopholes seem to have come in handy, enabling Rothermere to borrow money using his offshore-held DMGT shares as security, rather than bringing millions of his fortune into the UK and facing a full income tax charge on it.

It further described Rothermere’s offshore activity as involving “a bewildering web of companies and trusts”.

The Daily Mail also attacked the BBC over pay disparity. This is, again, a fair point to make. The now-exposed gender pay gap at the BBC is inexcusable. And the wages in many instances are too high for a publicly funded service.

But some have pointed out that The Daily Mail has issues of its own when it comes to this matter:

re #BBCpay debate worth recalling that the editor of the Daily Mail earns 10 times what the Prime Minister is paid. https://t.co/kb4F5T3FMT

As such, it’s important that tax avoidance is brought to light. Wherever it may be occurring.