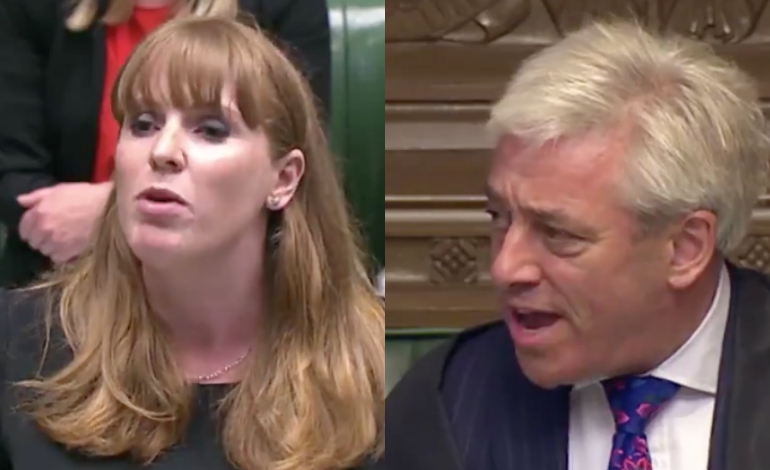 The Speaker of the House of Commons was forced to admonish a Tory MP for being rude and behaving like a school child. The incident took place during a debate on tuition fees. Shadow Education Secretary Angela Rayner was attempting to respond to a question, but was forced to stop after the behaviour of some MPs.

Speaker John Bercow aimed his telling off at Conservative MP Robert Jenrick. Rayner was not given the space to answer a question put to her, so Bercow had to intervene:

Look, members have really got to the learn the ropes, and the Honourable Gentleman’s been here now a number of years. It is normal manners and parliamentary etiquette that a member be given the chance to respond to an intervention before being hollered at to take another.

But Jenrick, far from being apologetic, laughed at Bercow. Bercow was not amused:

No, it’s not a laughing matter Mr Jenrick. You were, you were smirking, don’t smirk at me. I’m telling you what the situation is and you can accept it whether you like it or not. Behave.

Rayner was answering questions about Labour’s commitment to abolish tuition fees – one of the party’s key manifesto pledges. But Conservative MPs have accused Labour of breaking its promises after John McDonnell stated that wiping out the debt for existing students was “a real ambition”.

Jeremy Corbyn and Labour have not been honest with young people. During the election campaign Mr Corbyn promised students he would wipe out tuition fee loans, at a cost of £100 billion. Now his chief lieutenants have U-turned on this commitment and young people will see it as a betrayal.

But as McDonnell pointed out, it was no such thing:

And abolishing existing student debt was only ever something Labour said it would like to do something about if possible.

Perhaps it’s because they still get the same (if not longer) holidays than schoolchildren that some MPs choose to behave like children and treat parliament as if it’s their personal playground. But it is not acceptable.

The Conservative Party has been talking a lot recently about abuse in politics and how it needs to stop. Maybe the party should start by taking a long hard look at the behaviour of some of its own MPs. This is not constructive, orderly debate. This is grown men sneering at a woman attempting to answer questions.

If politicians are serious about wiping out abuse and making politics a safe space for people from all backgrounds, then they need to start modelling the behaviour they want from the rest of us. This is a prime example of how they are failing in this challenge.