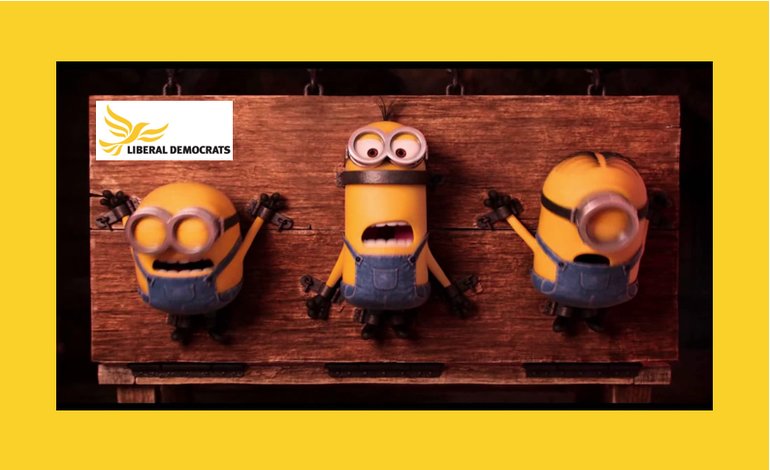 Liberal Democrat HQ might have felt a twinge of excitement when the party began trending on social media last night. Sadly for the party, it wasn’t the much-awaited revival that would make them relevant again. Instead, it was a gaffe that had the whole country laughing.

It’s been a rough few years for the Lib Dems. The party was cast into the political wilderness by an electorate that hasn’t forgotten the five years of coalition government with the Conservatives. Having won 57 seats in the 2010 general election, they lost all but eight just five years later. The public were particularly vengeful towards those Lib Dems central to the coalition – with Simon Hughes and Vince Cable both losing long-held seats.

In 2017, Tim Farron fared no better than Nick Clegg in 2015. The party secured just 12 seats, and Clegg was ousted by Labour in Sheffield.

Who would the party choose as its new leader? Given the repeated hammering at the polls, which fresh face would drive the party in a new direction?

The Lib Dems chose Vince Cable; a politician inextricably tied to the horrors of the coalition.

And in a time when people want conviction-led (as opposed to consultant-led) politics, what would be their new offer to voters? Here’s the big idea:

There is a gaping hole in the centre of British politics. We have an opportunity – and a duty – to occupy it under @vincecable’s leadership.

The same as the last bad idea.

It didn’t take long for people to start poking fun at the party’s expense:

And so it continued. Mostly, people reminded the Lib Dems that their claim to occupy the centre ground of UK politics was built on quicksand. And a look at the actions of the Lib Dems since 2010 explains why.

In 2010, the Lib Dems won many of its 57 seats by appealing to the student vote with a promise to scrap tuition fees. Once in power, the coalition trebled them instead. This was the first sign that Lib Dem words and Lib Dem deeds are very different beasts. The Liberal Democrats were full partners in the roll-out of ideological austerity.

As Secretary of State for Business, Innovation and Skills, Vince Cable oversaw the infamous Royal Mail sell off. The business select committee estimated that Cable’s deal – which undervalued the price of Royal Mail shares – cost the taxpayer £1bn. And even a report commissioned by Cable himself could only finesse that figure down to £180m.

Cable also backed Workfare. The policy forced job seekers into 13-week work placements in order to receive their benefit payments. The government forced job seekers into wageless labour, instead of supporting retraining or relevant work experience. And it supplied taxpayer-funded free labour to corporations from Tesco to Poundland.

The Court of Appeal ruled the scheme illegal in 2013. But the government carried on regardless. The results were predictable. Just 25% of people who completed the 13-week workfare programme ended up in paid work. The number was 44% for those who refused. And of course, employers opted for the state-funded workforce rather than hiring actual employees. In short, the £5bn scheme delivered worse results than doing nothing.

Creating debt mountains for students; flogging off public assets to the private sector at bargain basement prices; and creating a taxpayer-funded forced labour scheme for corporations. What kind of ‘centre ground’ is this?

Backing austerity, electing a leader who couldn’t be sure if sex between gay people wasn’t a mortal sin, and now reincarnating one of the architects of the hated Coalition government – the Lib Dems aren’t occupying the centre ground. They are flinging themselves from it like lemmings. And little wonder they’re haemorrhaging support. They are out of ideas, out of energy, and out of touch.