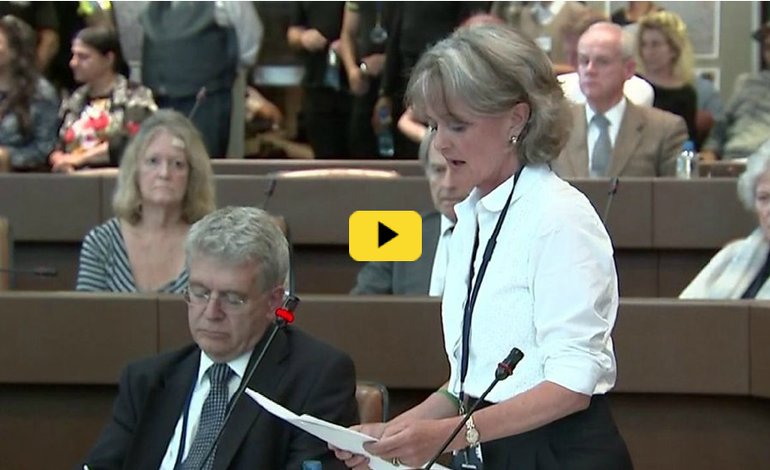 A resident of Grenfell Tower has called on the Conservative leader of the Royal Borough of Kensington Council to resign after a public meeting descended into chaos. His words, and the actions which provoked them, mean we all need to pay urgent attention. The disaster at Grenfell did not stop with the dying of the final flames. It is still unfolding today. He told the council leader:

You’ve let the dead down, now you want to come for the living?

Former Conservative council leader Nicholas Paget-Brown resigned in disgrace on 30 June in the wake of the tragedy. Not only did his council stand accused of creating the conditions in which the deadly fire occurred, but its response to the tragedy was invisible. After at least 80 people died in the blaze, local and national government essentially went AWOL. In their absence, the local community had to rally their own recovery effort.

Paget-Brown’s successor is fellow Conservative Elizabeth Campbell. The representative for affluent Sloane Square admits she has never stepped foot inside high-rise flats like those burned in Grenfell Tower. But she told The Guardian she doesn’t “think it is particularly relevant”. Little surprise then that her swearing in this week did not go well.

Dozens of Grenfell survivors attended the council meeting to let the new leader know what they thought of the way they’d been treated since. One man summed up the mood. He told the council leadership:

The Council Speaker told the resident to “calm down”. But he continued unperturbed:

I don’t see why you can’t listen to all those people who came through the fire. Listen to them folks. They don’t want you. They want Emma. They want Jeremy.

You’ve let the dead down, now you want to come for the living? Are you having a laugh?

…please Madam, step down and resign

"You've let the dead down, now you want to come for the living?" Grenfell Tower victims call for council leader to stand down pic.twitter.com/st3SuI0M3S

More than 2,200 people have signed a petition calling for the council’s entire elected leadership to resign. The petition has been backed by Dent Coad, who said “I agree entirely with the petition’s demands”.

Trust in local and national government was low at Grenfell even before the tragedy. The community had repeatedly complained of power surges, and of fire safety risks associated with the cladding installed on the building’s exterior. In 2013, Grenfell Action Group wrote that a major fire incident was narrowly averted during a “period of terrifying power surges”, which it said were found to have been caused by faulty wiring. This and a number of other incidents on other council properties sparked demand for a review, which never took place.

After the disaster on 14 June, the group wrote again about their warnings. They listed the 10 separate warnings they had sent to KCTMO and the council prior to the fire, saying:

ALL OUR WARNINGS FELL ON DEAF EARS and we predicted that a catastrophe like this was inevitable and just a matter of time.

The council and national government have made repeated promises to the community of Grenfell. They have kept almost none of them.

The Prime Minister promised to rehouse Grenfell residents within their community. Just 24 hours later, the media revealed the government had quietly dropped this promise.

The government promised full transparency in dealing with the disaster. Then the council banned the media from meetings. It took a High Court ruling against the council for the press to gain access.

Theresa May promised a swift and efficient rehousing of the Grenfell survivors. But so far, just 32 of 169 offers of temporary accommodation have been agreed.

The May government promised a fully independent inquiry, then appointed an inquiry head with a background of supporting social cleansing.

Trust was broken before the Grenfell disaster, and trust has been broken after it. Local and national government have given the community no reason to hope that this will change any time soon. Only unwavering national attention on Grenfell will force the council and the government to keep its promises. The community deserves no less than that.

– Sign the petition calling for the council leadership to resign.