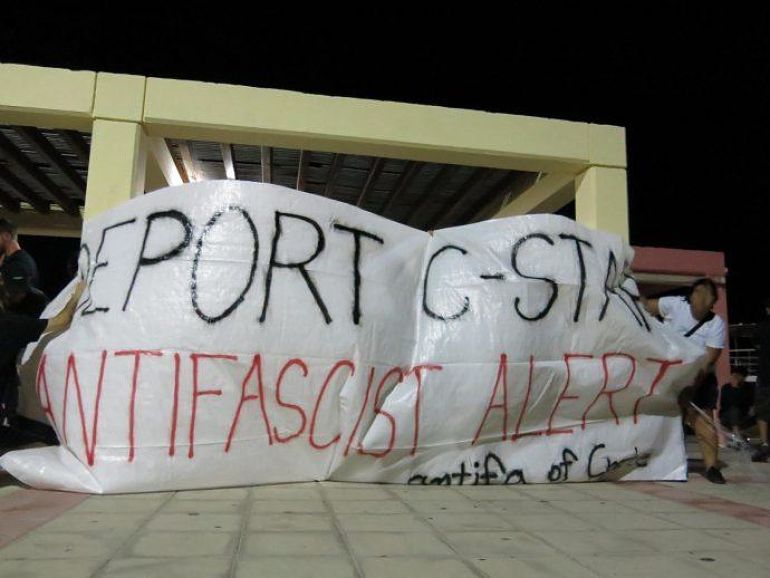 The Canary previously reported on a project by the far-right Génération Identitaire to disrupt vessels rescuing refugees in the Mediterranean. The project was publicised by the The Daily Mail, but not all of its reports went down well. And now, there is news that the identitarians‘ ship – the C-Star – is in serious trouble.

The ‘identitarians’ organise around ‘Defend Europe’, a campaign aimed at disrupting vessels that rescue refugees and migrants. But anti-fascists have been tracking the C-Star’s movements. And since arriving in the Mediterranean, the C-Star has had difficulty docking at ports.

On Monday 7 August, the ship made an attempt to dock at the Tunisian port of Zarzis. But the fishermen there were having none of it. One port official said: “Us let in racists here? Never.”

And Chamseddine Bourassine, head of a local fishermen’s organisation, added:

If they come here we’ll close the refueling channel. It is the least we can do given what is happening out in the Mediterranean. Muslims and Africans are dying.

Hindered at every stage

The C-Star has been tracked since leaving Djibouti. After passing through the Suez Canal, it headed for the Turkish Cypriot port of Famagusta. There, the captain was reportedly arrested [Turkish] for possessing false papers. And the ship was found to be carrying a number of Sri Lankans, who tried to claim refugee status but were later deported.

However, the captain was later released and new crew members were found.

After Cyprus, the ship unsuccessfully attempted to dock at Catania (Sicily) and next at Ierapetra (Crete), but was again unsuccessful. As anarchist collective Oktana explained:

Soon as we heard of the “visit”, comrades from Heraklion, Rethimno, Agios Nikolaos and Iearapetra, rushed to the town to communicate the event and be at the ready in case the European fascists tried to land their feet at the port. The demo that took place was unexpectedly large (over 100 people), taking into account it was only announced within a few hours and arranged at a relatively remote location of the island (Ierapetra). In addition, the demo managed successfully to communicate the news according to the local anti-fascists from Ierapetra which responded to the calling. Following the demo, we headed towards the port’s headquarters where we informed the port authority of the consequences of a possible docking of C-STAR on the island, or any other attempt to help the fascists.

After trying to approach our coasts, the fascists of C-STAR vessel left Crete and [moved] near the Libyan coast. According to the state of the ship in Marinetraffic.com and information from local news sources, within the next days the fascists of C-STAR will try to reach Tunisia or Italy. We hope that comrades and antifascists of the Mediterranean will act as appropriate like the antifascist movement did in Suez, Catania, Famagusta and Ierapetra.

On 5 August, the C-Star briefly tailed a vessel, operated by a French NGO that runs search and rescue. Now, the C-Star will reportedly try to dock at another Tunisian port, or head for Italy.

The real story here, of course, is that of war, exploitation and starvation; as well as the circumstances that push people to seek better living environments or escape conflict. This is the plight of the vast majority of refugees and migrants. And it stands within a context of colonial plunder and international corporate crime.

About 600,000 migrants have been rescued from boats and taken to Italy since the beginning of 2014. And more than 10,000 people have died attempting to cross the Mediterranean over that period.

If the far right hopes to interfere with such rescues, anti-fascists have just proven that they’ll have a fight on their hands.

– Donate to Hope Not Hate’s campaign against ‘Defend Europe’.