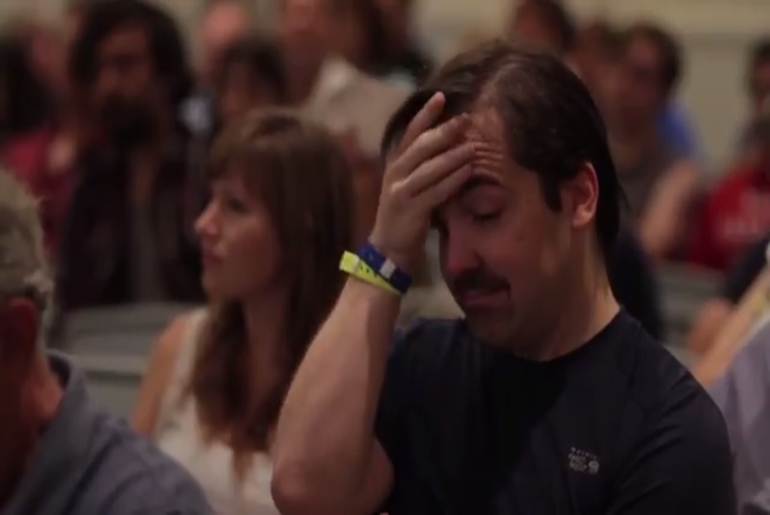 The Yes Men’s Igor Vamos caused America’s Democratic National Committee (DNC) some embarrassment when he managed to address constituents and journalists at this year’s Politicon. Vamos posed as the DNC’s Frank Spencer (Deputy Vice Chair of Civic Engagement) and soon raised eyebrows; because his rhetoric didn’t seem to fit the usual neoliberal agenda of the Democrats.

The Democrats have recently launched the Better Deal, which seemingly attempts to address economic disparity in the US. But as Vamos began to address the audience, his critique of the Democrats soon surprised many attendees.

The main point he put across was, essentially, that people’s concerns had been ignored because the Democratic Party’s “hands were tied; in large parts because of our donors”.

Vamos began his speech with considerable praise for the Better Deal, noting:

He goes on to address Senator Chuck Schumer’s comments regarding losing to Donald Trump, despite the latter’s 40% popularity.

He said the result was a good opportunity for some soul searching within the party. And he claimed that the Democrats had been canvassing the country for consensus:

Back in December, we started a series of Town Halls and focus groups to determine what voters across the political spectrum needed and wanted and what we failed to provide…

He goes on to state the results of their apparent research:

What we found in our research mirrored the national polls. It also mirrored what was happening in state and local elections across the country again, and again…

Vamos goes on to reel off some inconvenient truths. And these could leave the right-wingers in the Democratic Party snookered regarding their response. He states polling results that would leave many people in the room wondering why he’d bring these findings up in public:

We found that a solid majority of Americans wanted universal government-sponsored healthcare, even half of all Republicans did…

One Gallop poll has indicated that 58% of Americans favour replacing their current system (Obamacare, or the Affordable Care Act) with something more similar to Britain’s NHS. A YouGov/Economist poll in April 2017, meanwhile, found that most Americans are in favour of expanding Medicare to provide health insurance to every American. And a Pew survey from June 2017 found that 60% of Americans believe it is the federal government’s responsibility to make sure all Americans have healthcare coverage.

Are they even listening?

Vamos continues to reveal actual polling data that would seemingly put both the Democratic and Republic at odds (ideologically at least) with the majority of Americans:

Non-interventionism was very popular. As we know, a number of Trump voters voted that way because of his promises to keep us out of conflict.

And he goes on to mention the elephant in the room:

Almost everybody in our poll thinks that Wall Street has way too much influence. And many people said they would get rid of corporate lobbying altogether.

The problem with neoliberalism

Suddenly, Vamos says something that many wouldn’t expect from an establishment Democrat:

Once we understood these concerns that we had failed to address, we began to look at how we could do so in the future.

But he goes on to make an admission that confuses the room:

And that’s when we realised we couldn’t. Our hands were tied; in large parts because of our donors…

He continues to point out clear conflicts of interest to a baffled audience. And he casually mentions the relationship between the DNC and the pharmaceutical industry. He also explains how stronger unions would be a disaster for the management community. Then, he goes on to mention the other seemingly obvious government conflicts that exist: those within education, the military industrial complex, and Wall Street.

The joke’s on whom?

Vamos does not work for the DNC. And his rhetoric is rarely mirrored by DNC politicians who claim to want the same things as the electorate. He points out the benefit of a grassroots movement and the success Bernie Sanders has had in mobilising the electorate.

In the UK, meanwhile, neoliberal sympathisers within the Labour Party still seem to echo the position of establishment Democrats in the US; despite the success of the movement behind Jeremy Corbyn.

Perhaps because of the stubborn attitude of establishment political figures, the actions of astute commentators like the Yes Men are all the more important.

– See more on the prank here and here.

– Check out The Yes Men.