A far-right anti-refugee ship has had to be rescued by... you guessed it [TWEETS] - The Canary 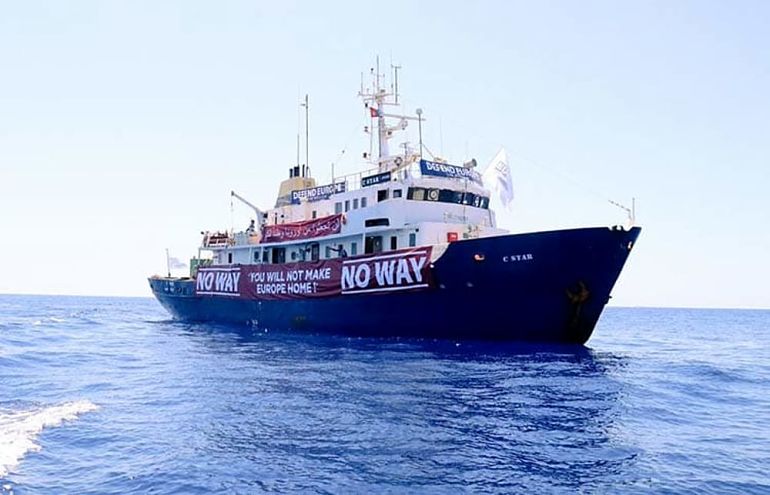 A ship chartered by ‘Defend Europe‘, a far-right project aiming to disrupt the rescue of refugees in the Mediterranean, has been forced to seek its own rescue. This was after the ship, C-Star, experienced engine trouble off the Libyan coast. Behind Defend Europe is a group of activists, who call themselves “Identitarians“. But since leaving Djibouti some weeks ago, their journey has been beset by problems at every stage, as The Canary reported. And now the ship has had to be rescued by an NGO that normally helps refugees.

After passing through the Suez Canal, the C-Star headed for the Turkish Cypriot port of Famagusta. There the captain was reportedly arrested, allegedly for possessing false papers. Also, the ship was found to be carrying a number of Sri Lankan people, who tried to claim refugee status but who were later deported. However, the captain was released and new crew members found.

After Cyprus, the ship unsuccessfully attempted to dock at Catania (Sicily) and next at Ierapetra (Crete). But that was again unsuccessful, thanks to the efforts of local anarchists.

And on 7 August the ship attempted to dock at the Tunisian port of Zarzis, though the fishermen there were having none of it.

Since then the ship was logged as staying in the same spot, just a few miles off the Libyan coast. And it was clear it had run out of fuel, or was experiencing engine problems:

On the morning of 11 August, the ship indeed reported damage to its engine:

🇬🇧 The #CStar is having technical difficulty. We're resolving it. No distress. #DefendEurope pic.twitter.com/4qksU8fN1N

But the engine problem was not resolved and the EU’s Naval Force’s ‘Operation Sophia’ contacted the nearest vessel to provide help.

The German-registered Sea-Eye was first to answer the call and indicated it would offer all assistance:

A big dollop of irony

Ironically, Sea-Eye is chartered by an NGO that provides assistance to refugees. The Sea-Eye subsequently issued a statement:

No worries… The NGOs are coming your way. As opposed to you they don't discriminate when people's lives are at stake. pic.twitter.com/t4ZxEoiHF5

Sea-Eye said Italian officials told its crew the ship had suffered a mechanical problem, meaning it could no longer manoeuvre.

To help a ship in distress is the duty of anyone at sea, without regard for their origin, race, religion or beliefs… Sea-Eye took on a course towards the C-Star and got in contact with the right-wing extremists, but they refused any help… On the instructions of the Maritime Rescue Coordination Centre [in Rome], the Sea-Eye continued its search for shipwrecks and drownings.

This has been a disastrous voyage for the C-Star, as well as for The Daily Mail, which publicised its mission, though not always successfully.

Meanwhile, as of 11 July 2017 there have been 2,353 migrant deaths in the Mediterranean. But the humanitarian work of Sea-Eye, of MOAS (Migrant Offshore Aid Station) and MSF (Médecins Sans Frontières) continues.

– Donate to Hope Not Hate’s campaign against ‘Defend Europe’, Médecins Sans Frontières and to Sea Eye.