As Trump threatens nuclear war, a new book annihilates him in less than 170 pages - Canary 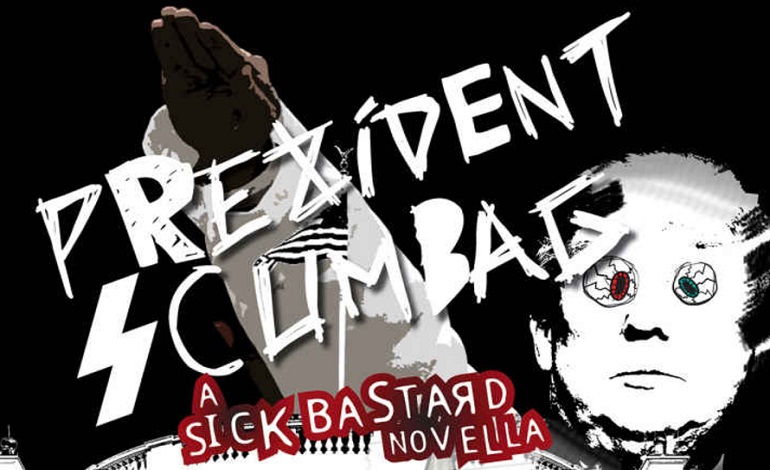 THIS ARTICLE CONTAINS LANGUAGE THE READER MAY FIND OFFENSIVE

With Donald Trump repeatedly making the headlines over the escalating situation between the US and North Korea, a new book has taken aim at the President. And it’s a no holds barred rollercoaster, following a British punk rock band as they plan the ultimate road trip: to gatecrash a Trump press conference, right outside the White House.

Rupert Dreyfus is a now established author and journalist whose work draws on transgressive fiction, black comedy and satire. From the north of England, his writing takes swipes at establishment politics, the corporate world and pop culture. Dreyfus has now turned his attention to Trump in his latest book, Prezident Scumbag! A Sick Bastard Novella. And The Canary caught up with the radical author to chat about his most in-your-face work yet.

Prezident Scumbag! follows the chaotic life of British punk rock band Sick Bastard. Set in the not-too-distant past, it deals with the immediate fall out of Trump’s election as US President, written from the view point of Fazal Khan, Sick Bastard’s lead singer. The group, a rag-tag formation of “crusty vegan anarchists”, decide the best response to the election of a “ruthless crypto-fascist” is to write a new “hymn” and “put on the biggest protest show since that cunt George Bush got hired”; right on the steps of the White House.

But the road to Washington DC is not a straight one for Sick Bastard. Along the way, they deal with a corporate “swine” who has a sexual fetish for gnomes, a transatlantic flight filled with “holiday wankers”, US computer “nerds” and the American far right. All while attempting to get to Washington DC and “Castle Scumbag”.

Not for the faint-hearted

Prezident Scumbag! is not for the faint-hearted. Dreyfus bombards the reader with a literary machine gun of expletives and drug references, all in his now-customary darkly comic style. His use of language is a lot harder than in his previous work, but the graphic nature of the book is toned down compared to works such as The Rebel’s Sketchbook. Dreyfus told The Canary, though, that we as readers should maybe not be so concerned with the word ‘cunt’ being said 178 times (by this writer’s calculation):

Language goes too far when we have a Tory politician saying that she’s pleased we have food banks; language doesn’t go nearly so far enough when Bethan Tichborne told David Cameron that he has blood on his hands and then remarkably got arrested on a public order offence. But in all seriousness, we need to pay attention to offensive actions rather than getting side-tracked by what people are saying. That’s what causes the real misery in the world.

Dreyfus’ decision to make Prezident Scumbag! so hard-hitting was a conscious one. He says that it is a “direct response to the new breed of right wing populism which claims to be anti-establishment but clearly isn’t”. Dreyfus says it “annoys” him that right-wing commentators sell politicians like Trump and Nigel Farage as “anti-establishment”:

All we see is the same shit, except it’s drifting further to the right. To really take on the establishment you first need to understand what the establishment is and then switch gears. So the narrator in the story… was intended to provide a sense of proportion to the notion of what it means to be anti-establishment.

As with all Dreyfus’ work, Prezident Scumbag! is very accessible. The chapter formation is short, with no overly long paragraphs; he clips sentences and the language is not over-embellished. But what’s notable about Prezident Scumbag! compared to Dreyfus’ other work is the lack of pop culture references. But Dreyfus has replaced these with a mass of commentary on the nature of society, politics and anarchism.

Dreyfus masterfully takes Sick Bastard’s expletives, drug-taking and fist fights and juxtaposes them with commentary about the state of the world we live in. And it’s apparent that Dreyfus is trying to smash preconceptions about anarchism. For example, at one point Dreyfus goes from outlining a conversation about Paul Daniels performing a magic trick while Debbie Magee “shits a rod of uranium”, to making a point about 21st century politics:

You only have to observe the quality of debate in the House of Commons every week to see that the species has long given up on itself. Our leaders know as well as we do that nobody is listening anymore. It’s just a necessary façade. Every decision made is a business decision for business people. Human beings are nothing more than an inconvenience. In fact I’d be so bold as to say that we no longer even have politicians; we have business people running the world now.

But it’s the picture of anarchism, and what it really means, which Dreyfus paints so well. He told The Canary:

In my view anarchism is what we arrive at if we take the idea of democracy seriously enough to see it through to its logical conclusion. It also happens to be the antithesis of what we have right now: bottom-up peace and equality as opposed to top-down authoritarianism and the normalisation of injustice. Associating anarchism with violence and disorder is a convenient way for our rulers and their cheerleaders to discredit a philosophy which, at its very heart, is based on a profound respect for all creatures. This trend began with the Haymarket bombings and continues with, for example, the BBC hacks calling looters at the London Riots anarchists.

Once this association is embedded in the public’s consciousness, anarchism becomes undesirable and an entire school of enlightened thought can be dismissed out of hand. They do the same by associating the horrors of Stalinism with socialism so that nobody can talk about socialism without some gorgon accusing you of being a Stalinist. It’s an age-old tactic by astute propagandists.

Prezident Scumbag! also makes repeated points about the far right; specifically racism. Khan’s character is of Bangladeshi heritage, and he describes how racist abuse as a teenager took its toll on him. But how it also shaped his world view. And Dreyfus appears to make the point that the racist, xenophobic attitude of the far right have never really gone away; Tony Blair’s ‘political correctness’ just papered over the cracks. He said:

The main problem with political correctness… is that it often doesn’t consider context and consequently becomes obstructive to using language. I’d personally love to live in a world where we all walk around whispering nice things to each other, but the way to achieve this isn’t getting outraged by certain words and phrases. Adults should be free to express themselves however they want. But with the usual caveat that so long as this doesn’t hurt others or infringe on people’s space. And then expect the consequences when they say something completely stupid.

I didn’t really answer your question so allow me to clarify one point: Blair’s a clueless racist; no doubt about it. He linked hard crime to ‘black culture’ and set race relations back by thirty years.

Dreyfus uses many literary devices in his work, and one he is notably employing is periphrasis; or the over-embellishment of a point. In the final chapter of Prezident Scumbag! he flips the writing style from sharp and hard-hitting to almost poetic and whimsical. The stark contrast between styles is almost an analogy of the branches of far left politics; ones which struggle to meet. But Dreyfus believes that it is crucial for society that different political ideologies try and work together:

We fundamentally need to realise that once we cut through the bullshit many of us are natural allies. For one obvious example we all want varying degrees of socialism because we understand that it can bring many benefits; we just need to stop bickering about the finer details until we’re in a privileged position to do so. Right now the goal is to unite everyone who’s pushing for peace and equality while distancing ourselves from the authoritarian streak of the left-wing.

Prezident Scumbag! really is a rollercoaster of a book. It is laugh out loud funny in places, but with political and social commentary that is sorely lacking in mainstream discourse. The book leaves you exhausted, humoured and questioning many things you thought you once knew. But it also addresses so many of the challenges society faces in a way that only Dreyfus can do: with wry humour and straight-talking honesty. And while the book is a damning commentary of politicians like Trump, Dreyfus is hopeful for the future:

History teaches us that revolution begins with the DIY spirit and by creating alternatives; be it with the news, the arts or pretty much everything else in our lives. These alternatives have always been around, but the internet is helping them to flourish at an astonishing rate. And the beauty is that everyone can participate. This new age of organising is still in its infancy, and there are teething problems. But I’ve said numerous times that we’re yet to realise its full potential.

The Canary asked Dreyfus what he would say to if he had two minutes with Trump. And the author said, catergorically:

Eat shit and die. I’d repeat this as many times as possible until the two minutes were up.