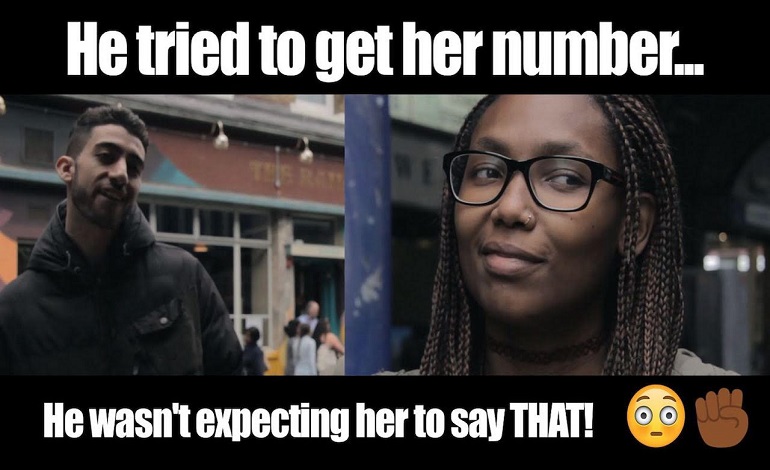 A revolutionary rapper and poet’s latest work is a radical take on a literary classic: the love story. But what this artist has done is blended an ‘urban romance’ with more pressing social issues. And the result will leave you heart-warmed, but thinking too.

Potent Whisper (aka Georgie Stephanou) comes from a single-parent, working-class family on a council estate in South West London. And it’s politics and social issues that shape Whisper’s music. Since 2015, Whisper has come into his own. From the grime-heavy anti-gentrification anthem Brixton First featuring Lara Lee from The Voice, to his collection of spoken word Rhyming Guides To… his artistry and ability to twist politics with music and words is fast gaining him a reputation.

But now, in what seems on the face of it a departure from his usual work, Whisper has produced what he describes as a “radical urban romance”. But the difference with this is that it’s performed almost entirely in rhyme and British Sign Language (BSL). And The Canary caught up with Whisper to find out more about What You Saying?

The film, shot and edited by revolutionary video production company Global Faction, follows Whisper’s character, who he describes as a “lad”, rubbernecking a girl waiting for a bus in Brixton, South London. He goes over to speak to the girl and asks her “What you saying?”. But the response he gets isn’t what he was expecting:

What You Saying? is taken from a series of shorts called Real Talk. The collection is interested in exploring what happens when we take everyday slang and throw it into a political or philosophical frame. For example, the first film in the series, released in 2014, uses a common street greeting ‘What’s Going On?’ to examine everything from creation to politics to human nature. You can watch What’s Going On? here.

And while What You Saying? may seem like a departure from Whisper’s usual grime-heavy political music or radical spoken word, he told The Canary it’s actually not:

What You Saying? is not dissimilar to my work in general, in the respect that it uses rhyme to explore key social and political issues. The main differences being that the film has more of a theatrical narrative, with extra cast members, and gives me the opportunity to play other roles aside from delivering spoken word as myself.

Whisper’s opposite number in the film is played by actress Vilma Jackson. She has worked for a number of years in film, theatre and television, alongside both hearing and deaf actors. And you can see more of her work here.

One of her most memorable experiences was doing the BSL for the band Women’s Hour’s song Her Ghost. She told The Canary that she believes signing lyrics, instead of just singing them, “provides a deep experience for hearing people, as well as making the music accessible for deaf people”. She also said:

BSL is a very visual language, created with hands movement, facial expression and eye contact. This is what makes it so interesting and beautiful. Signed music can bridge the gap between the hearing and the deaf and build a world of deaf awareness; to the benefit of both of worlds.

But it’s the political and social aspect of deaf people in the entertainment industry which is also important to Jackson. She said:

Over the years I’ve learned and believe that there is a place for deaf actors in hearing theatre and film. Although there are still some barriers and challenges to be overcome, I choose to remain positive that changes are occurring in today’s society. As a deaf person I feel very proud and honoured to be part of these changes. Any opportunity that I get to promote deaf communities and sign language becomes a matter of the heart.

And, as with so much of Whisper’s work, politics and societal issues underpin What You Saying?

It’s this notion that assumptions, preconceptions and stereotypes can and should be smashed which is central to the film. But as Whisper told The Canary, when you apply this theme to society more broadly, the implications are massive:

The smashing of both character’s and the audience’s preconceptions is perhaps what makes the film poignant. But unfortunately it is these preconceptions that in real life keep so many oppressed. Growing up, society led me to believe that all black people are dangerous. Society then went on to vilify single parents and portray benefit claimants as scroungers. Now it tells us that all Muslims are terrorists and immigrants are the reason that millions of people in this country live in poverty, or on the brink of.

The political class create these false narratives on various groups of people, using the media, to misdirect working class (righteous) fury away from their own front doors, where it belongs. I believe that artists must stand up to act as the people’s media, one of our roles being to destroy these preconceptions which play a large role in keeping the people oppressed.

But the film’s overall message is also one of ‘speaking up’ in the face of adversity. Because as Jackson’s character notes, while there’s “so much beauty… [to] rise to meet”:

On the other hand, I cease to see this wonderland while people bleed, and recently I’ve seen and come to understand the need to speak. The need to take a stand and speak for [the] sake of mankind; whether you shout loud, or whether you raise your hands high.

Perhaps one of the most recent tragedies that has prompted a mass of public debate is the Grenfell Tower fire, in which at least 80 people died. Whisper, who released a spoken word piece about the fire, says that an event like Grenfell can act as a “catalyst for significant political change in this country”. But he also thinks the “the window for this anger to materialise is closing further shut with every day that passes”. He says that “what is required for change to happen is not just speaking, but direct action”.

But Whisper still places a great emphasis on the power that each one of us holds for ‘speaking up’ about injustice. He told The Canary:

I think many people view ‘speaking up’ as something that comes with an official platform, special occasion or some sort of extraordinary ability to articulate yourself in a loud manner. On the contrary, it seems that it is often the accumulation of small quiet conversations that are the most important and effective in making change.

It is the display of disapproval if you hear a family member make a racist remark; not laughing when a colleague makes a joke about gay or trans people. It is engaging positively with a homeless person who approaches you publicly. Or standing with someone, even silently, if they are receiving abuse on the street. As my film evidences, there are many ways to speak up, and it doesn’t always involve words. Vilma’s character makes the decision to speak, even when she feels that nobody will hear her. This is the spirit with which many activists persist.

However you do it, just speak

What You Saying? is another masterful piece of work by this young artist from South London. Not only does it highlight the importance of BSL, it manages to challenge our ideas about preconceptions and stereotypes. But it also delivers a fundamental message: that, in essence, we all have a voice in society, and the world, whatever shape it may take. And if we want to see any sort of change to how we exist, we need to be using our voices; possibly a lot more than we currently are.

Whisper will soon be releasing a new single, Fallout (Dirty) featuring MOBO Award winner Fola Phillips. The track is an anti-nuclear power anthem, produced in collaboration with Lis Fields from the Campaign for Nuclear Disarmament (CND). Whisper filmed the music video at a wind and solar farm in Swindon, and the project will be released on 19 September.